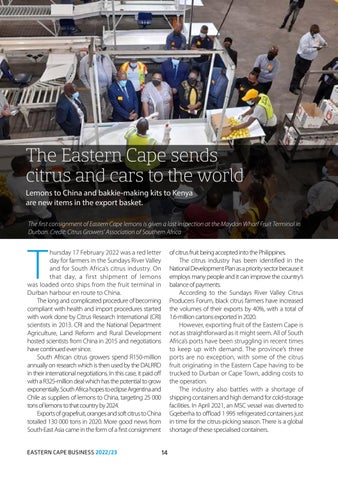 The Eastern Cape sends citrus and cars to the world Lemons to China and bakkie-making kits to Kenya are new items in the export basket. The first consignment of Eastern Cape lemons is given a last inspection at the Maydon Wharf Fruit Terminal in Durban. Credit: Citrus Growers’ Association of Southern Africa

of citrus fruit being accepted into the Philippines. The citrus industry has been identified in the National Development Plan as a priority sector because it employs many people and it can improve the country’s balance of payments. According to the Sundays River Valley Citrus Producers Forum, black citrus farmers have increased the volumes of their exports by 40%, with a total of 1.6-million cartons exported in 2020. However, exporting fruit of the Eastern Cape is not as straightforward as it might seem. All of South Africa’s ports have been struggling in recent times to keep up with demand. The province’s three ports are no exception, with some of the citrus fruit originating in the Eastern Cape having to be trucked to Durban or Cape Town, adding costs to the operation. The industry also battles with a shortage of shipping containers and high demand for cold-storage facilities. In April 2021, an MSC vessel was diverted to Gqeberha to offload 1 995 refrigerated containers just in time for the citrus-picking season. There is a global shortage of these specialised containers.

hursday 17 February 2022 was a red letter day for farmers in the Sundays River Valley and for South Africa’s citrus industry. On that day, a first shipment of lemons was loaded onto ships from the fruit terminal in Durban harbour en route to China. The long and complicated procedure of becoming compliant with health and import procedures started with work done by Citrus Research International (CRI) scientists in 2013. CRI and the National Department Agriculture, Land Reform and Rural Development hosted scientists from China in 2015 and negotiations have continued ever since. South African citrus growers spend R150-million annually on research which is then used by the DALRRD in their international negotiations. In this case, it paid off with a R325-million deal which has the potential to grow exponentially. South Africa hopes to eclipse Argentina and Chile as suppliers of lemons to China, targeting 25 000 tons of lemons to that country by 2024. Exports of grapefruit, oranges and soft citrus to China totalled 130 000 tons in 2020. More good news from South-East Asia came in the form of a first consignment EASTERN CAPE BUSINESS 2022/23

The 2022/23 edition of Eastern Cape Business is the 15th edition of this successful publication that, since its launch in 2006, has established itself as the premier business and investment guide for the Eastern Cape. The Eastern Cape’s strengths in the citrus and automotive manufacturing are noted in a special feature on provincial exports in this edition. Three towns and two Special Economic Zones host original equipment manufacturers (OEMs) and automotive component companies. Volkswagen has been making cars in Kariega for 71 years, Mercedes-Benz in East London has gone past its 60th anniversary and Ford (engines) and Isuzu are staples of the Gqeberha economy. The regional economy notes developments in the film and tourism sectors, with the exciting prospect of a new national park being proclaimed in the province. Overviews are provided on the key economic sectors of the province and the potential of the Oceans Economy and the prospects of oil and gas for this coastal province are examined. 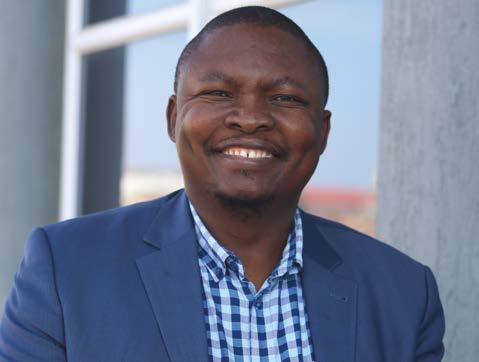 A unique guide to business and investment in the Eastern Cape. 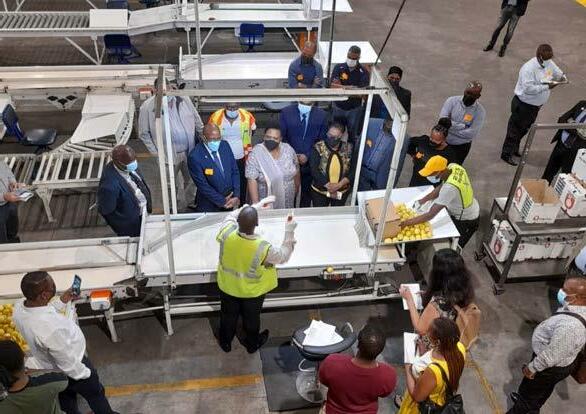 The Eastern Cape sends citrus and cars to the world

Lemons to China and bakkie-making kits to Kenya are new items in the export basket. 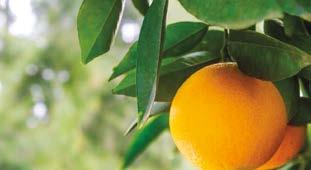 Investment in solar and wind projects is ramping up. 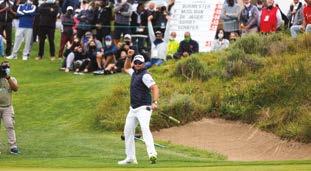 Aspen is making vaccines for Africa. 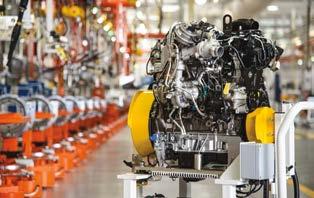 Volkswagen has celebrated 70 years of making cars in South Africa. 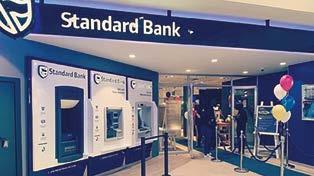 Digital services are expanding and improving.