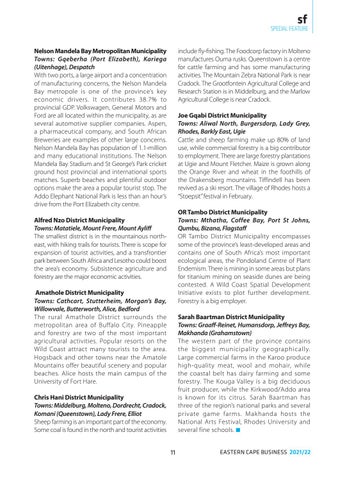 SPECIAL FEATURE Nelson Mandela Bay Metropolitan Municipality Towns: Gqeberha (Port Elizabeth), Kariega (Uitenhage), Despatch With two ports, a large airport and a concentration of manufacturing concerns, the Nelson Mandela Bay metropole is one of the province’s key economic drivers. It contributes 38.7% to provincial GDP. Volkswagen, General Motors and Ford are all located within the municipality, as are several automotive supplier companies. Aspen, a pharmaceutical company, and South African Breweries are examples of other large concerns. Nelson Mandela Bay has population of 1.1-million and many educational institutions. The Nelson Mandela Bay Stadium and St George’s Park cricket ground host provincial and international sports matches. Superb beaches and plentiful outdoor options make the area a popular tourist stop. The Addo Elephant National Park is less than an hour’s drive from the Port Elizabeth city centre.

include fly-fishing. The Foodcorp factory in Molteno manufactures Ouma rusks. Queenstown is a centre for cattle farming and has some manufacturing activities. The Mountain Zebra National Park is near Cradock. The Grootfontein Agricultural College and Research Station is in Middelburg, and the Marlow Agricultural College is near Cradock. Joe Gqabi District Municipality Towns: Aliwal North, Burgersdorp, Lady Grey, Rhodes, Barkly East, Ugie Cattle and sheep farming make up 80% of land use, while commercial forestry is a big contributor to employment. There are large forestry plantations at Ugie and Mount Fletcher. Maize is grown along the Orange River and wheat in the foothills of the Drakensberg mountains. Tiffindell has been revived as a ski resort. The village of Rhodes hosts a “Stoepsit” festival in February. OR Tambo District Municipality Towns: Mthatha, Coffee Bay, Port St Johns, Qumbu, Bizana, Flagstaff OR Tambo District Municipality encompasses some of the province’s least-developed areas and contains one of South Africa’s most important ecological areas, the Pondoland Centre of Plant Endemism. There is mining in some areas but plans for titanium mining on seaside dunes are being contested. A Wild Coast Spatial Development Initiative exists to plot further development. Forestry is a big employer.

Alfred Nzo District Municipality Towns: Matatiele, Mount Frere, Mount Ayliff The smallest district is in the mountainous northeast, with hiking trails for tourists. There is scope for expansion of tourist activities, and a transfrontier park between South Africa and Lesotho could boost the area’s economy. Subsistence agriculture and forestry are the major economic activities. Amathole District Municipality Towns: Cathcart, Stutterheim, Morgan’s Bay, Willowvale, Butterworth, Alice, Bedford The rural Amathole District surrounds the metropolitan area of Buffalo City. Pineapple and forestry are two of the most important agricultural activities. Popular resorts on the Wild Coast attract many tourists to the area. Hogsback and other towns near the Amatole Mountains offer beautiful scenery and popular beaches. Alice hosts the main campus of the University of Fort Hare.