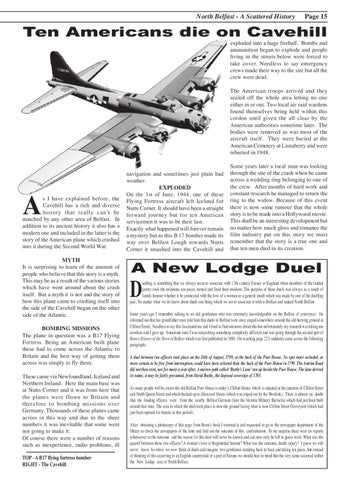 Ten Americans die on Cavehill exploded into a huge fireball. Bombs and ammunition began to explode and people living in the streets below were forced to take cover. Needless to say emergency crews made their way to the site but all the crew were dead. The American troops arrived and they sealed off the whole area letting no one either in or out. Two local air raid wardens found themselves being held within this cordon until given the all clear by the American authorities sometime later. The bodies were removed as was most of the aircraft itself. They were buried at the American Cemetery at Lisnaberry and were reburied in 1948.

s I have explained before, the Cavehill has a rich and diverse history that really can’t be matched by any other area of Belfast. In addition to its ancient history it also has a modern one and included in the latter is the story of the American plane which crashed into it during the Second World War. MYTH It is surprising to learn of the amount of people who believe that this story is a myth. This may be as a result of the various stories which have went around about the crash itself. But a myth it is not and the story of how this plane came to crashing itself into the side of the Cavehill began on the other side of the Atlantic. BOMBING MISSIONS The plane in question was a B17 Flying Fortress. Being an American built plane these had to come across the Atlantic to Britain and the best way of getting them across was simply to fly them. These came via Newfoundland, Iceland and Northern Ireland. Here the main base was at Nutts Corner and it was from here that the planes were flown to Britain and therefore to bombing missions over Germany. Thousands of these planes came across in this way and due to the sheer numbers it was inevitable that some were not going to make it. Of course there were a number of reasons such as inexperience, radio problems, ill TOP - A B17 flying fortress bomber RIGHT - The Cavehill

navigation and sometimes just plain bad weather. EXPLODED On the 1st of June, 1944, one of these Flying Fortress aircraft left Iceland for Nutts Corner. It should have been a straight forward journey but for ten American servicemen it was to be their last. Exactly what happened will forever remain a mystery but as this B 17 bomber made its way over Belfast Lough towards Nutts Corner it smashed into the Cavehill and

Some years later a local man was looking through the site of the crash when he came across a wedding ring belonging to one of the crew. After months of hard work and constant research he managed to return the ring to the widow. Because of this event there is now some rumour that the whole story is to be made into a Hollywood movie. This shall be an interesting development but no matter how much gloss and romance the film industry put on this story we must remember that the story is a true one and that ten men died in its creation.

uelling is something that we always seem to associate with 17th century France or England when members of the landed gentry took the infamous ten paces, turned and fired their muskets. The purpose of these duels was always as a result of family honour whether it be connected with the love of a woman or a general insult which was made by one of the duelling pair. No matter what we do know about duels one thing which we never associate it with is Belfast and indeed North Belfast. Some years ago I remember talking to an old gentleman who was extremely knowledgeable on the Belfast of yesteryear. He informed me that his grandfather once told him that duels in Belfast were once staged somewhere around the old burying ground at Clifton Street. Needless to say this fascinated me and I tried to find out more about this but unfortunately my research was taking me nowhere and I gave up. Sometime later I was researching something completely different and was going through the second part of Benn’s History of the Town of Belfast which was first published in 1880. On reaching page 22 I suddenly came across the following paragraph:A duel between two officers took place on the 26th of August, 1799, at the back of the Poor House. No spot more secluded, or more certain to be free from interruption, could have been selected than the back of the Poor House in 1799. The Antrim Road did not then exist, nor for many a year after; A narrow path called ‘Buttle’s Lane’ ran up beside the Poor House. The lane derived its name, it may be fairly presumed, from David Buttle, the deposed sovereign of 1703. As many people will be aware the old Belfast Poor House is today’s Clifton House which is situated at the junction of Clifton Street and North Queen Street and which backed up to Glenravel Street (which was wiped out by the Westlink). There is almost no doubt that the feuding officers were from the nearby Belfast Garrison (later the Victoria Military Barracks) which had just been built around that time. The area in which the duel took place is now the ground facing what is now Clifton Street Graveyard (which had just been opened for burials at this period). After obtaining a photocopy of this page from Benn’s book I returned it and requested to go to the newspaper department of the library to check the newspapers of the time and find out the outcome of this confrontation. To my surprise there were no reports whatsoever to the outcome and the reason for this duel will never be known and can now only be left to guess work. What was the quarrel between these two officers? A woman’s love or Regimental honour? What was the outcome, death, injury? I guess we will never know. So when we now think of duels and imagine two gentlemen standing back to back and taking ten paces, but instead of thinking of this occurring in an English countryside or a part of Europe we should bear in mind that the very same occurred within the New Lodge area of North Belfast. 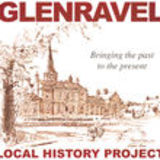