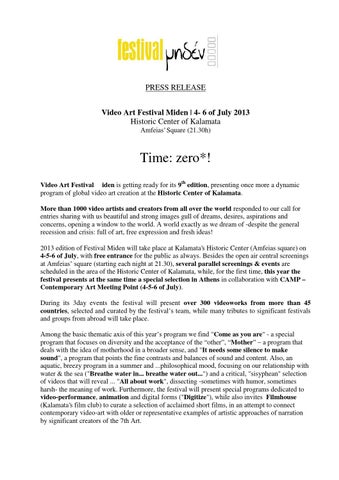 Time: zero*! Video Art Festival Μiden is getting ready for its 9th edition, presenting once more a dynamic program of global video art creation at the Historic Center of Kalamata. More than 1000 video artists and creators from all over the world responded to our call for entries sharing with us beautiful and strong images gull of dreams, desires, aspirations and concerns, opening a window to the world. A world exactly as we dream of -despite the general recession and crisis: full of art, free expression and fresh ideas! 2013 edition of Festival Miden will take place at Kalamata&#39;s Historic Center (Amfeias square) on 4-5-6 of July, with free entrance for the public as always. Besides the open air central screenings at Amfeias’ square (starting each night at 21.30), several parallel screenings &amp; events are scheduled in the area of the Historic Center of Kalamata, while, for the first time, this year the festival presents at the same time a special selection in Athens in collaboration with CAMP – Contemporary Art Meeting Point (4-5-6 of July). During its 3day events the festival will present over 300 videoworks from more than 45 countries, selected and curated by the festival’s team, while many tributes to significant festivals and groups from abroad will take place. Among the basic thematic axis of this year’s program we find &quot;Come as you are&quot; - a special program that focuses on diversity and the acceptance of the “other”, “Mother” – a program that deals with the idea of motherhood in a broader sense, and &quot;It needs some silence to make sound&quot;, a program that points the fine contrasts and balances of sound and content. Also, an aquatic, breezy program in a summer and ...philosophical mood, focusing on our relationship with water &amp; the sea (&quot;Breathe water in... breathe water out...&quot;) and a critical, &quot;sisyphean&quot; selection of videos that will reveal ... &quot;All about work&quot;, dissecting -sometimes with humor, sometimes harsh- the meaning of work. Furthermore, the festival will present special programs dedicated to video-performance, animation and digital forms (&quot;Digitize&quot;), while also invites Filmhouse (Kalamata&#39;s film club) to curate a selection of acclaimed short films, in an attempt to connect contemporary video-art with older or representative examples of artistic approaches of narration by significant creators of the 7th Art.

Along with its own selections, the festival will also present several special tributes to significant festivals &amp; platforms from other countries: Animate Cologne (Germany), Where Dreams Cross (Sweden), FONLAD -digital arts festival (Portugal), Now &amp; After (Russia), Visualcontainer (Italy), Red Nomade (Spain), Videoplay (Argentina), Manipulated Image (USA), VANLagos (Nigeria). In addition, a selection from the project JOUR DE FÊTE, first presented in the frame of LOOP/Screen Festival (Barcelona), as well as an interesting thematic tribute dedicated to sensitive social groups: a selection of youth video-creations from Kids Company (a therapeutic centre specialized in vulnerable kids &amp; youth, based in London), a video made by patients of the remediation unit at the Community Mental Health Center Byron-Kaisariani (Athens) and a special program dedicated to the Elderly. Combined with the thematic program &quot;Come as you are&quot; and the &quot;videogame&quot; installation Banopticon by Personal Cinema that deals with migration in Europe, these presentations form a wide tribute that aims to the combating of social discrimination, racism and social exclusion. Festival Miden will continue to deal with this thematic in the next months, collaborating with Kalamata&#39;s Youth Center in the frame of a European Youth Initiative Action entitled Lives of &quot;others&quot;. The project aims to connect us with the &quot;others&quot;, to meet them, to cooperate and to create all together. Festival Miden 2013 is realized with the support of the Municipality of Kalamata, in collaboration with Kalamata&#39;s Youth Center and Kalamata&#39;s Film Club - Filmhouse, while also Kallitechniko Steki and other venues at the Historic Center of Kalamata will kindly host parallel events. The central curating is signed by Gioula Papadopoulou and Margarita Stavraki, while certain programs were curated this year by Ioanna Dimitrakopoulou-Koutava, Terpsi Kontargyri, Maria Bourika and Manuela Gascon. ______________

Festival Miden*, the first Greek video art festival presented in open public spaces, is an annual video art &amp; new media cultural event held in Kalamata, GR. It is an independent organization founded, organized and curated by a team of contemporary Greek artists. Since 2005, Festival Miden has been gradually established as one of the most successful and interesting video art festivals in Greece and abroad and has been a significant point of cultural exchange for Greek and international video art, creating an alternative, peripheral meeting point for emerging and established video artists. Aiming to create a network of communication with artists and organizations globally, Festival Miden has also collaborated with many video art festivals, artspaces, groups and initiatives in other cities of Greece and abroad. (*Miden means “zero” in Greek)

WITH THE SUPPORT OF: 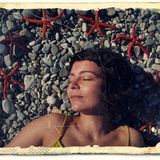