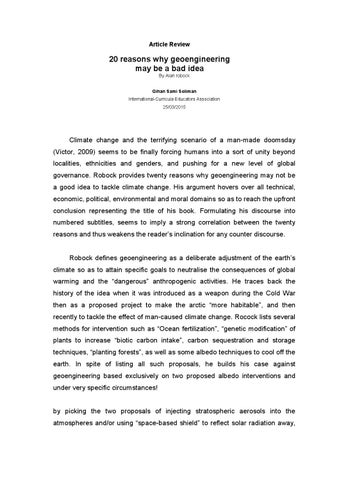 Climate change and the terrifying scenario of a man-made doomsday (Victor, 2009) seems to be finally forcing humans into a sort of unity beyond localities, ethnicities and genders, and pushing for a new level of global governance. Robock provides twenty reasons why geoengineering may not be a good idea to tackle climate change. His argument hovers over all technical, economic, political, environmental and moral domains so as to reach the upfront conclusion representing the title of his book. Formulating his discourse into numbered subtitles, seems to imply a strong correlation between the twenty reasons and thus weakens the reader’s inclination for any counter discourse. Robock defines geoengineering as a deliberate adjustment of the earth’s climate so as to attain specific goals to neutralise the consequences of global warming and the “dangerous” anthropogenic activities. He traces back the history of the idea when it was introduced as a weapon during the Cold War then as a proposed project to make the arctic “more habitable”, and then recently to tackle the effect of man-caused climate change. Rocock lists several methods for intervention such as “Ocean fertilization”, “genetic modification” of plants to increase “biotic carbon intake”, carbon sequestration and storage techniques, “planting forests”, as well as some albedo techniques to cool off the earth. In spite of listing all such proposals, he builds his case against geoengineering based exclusively on two proposed albedo interventions and under very specific circumstances! by picking the two proposals of injecting stratospheric aerosols into the atmospheres and/or using “space-based shield” to reflect solar radiation away,

he unjustifiably “pretends” as if they were the only options available and thus passes an ultimate judgment based on conditional situations; while the fact is that geoengineering may include less dramatical solutions that were introduced in his book – and those of others (Victor, 2009; Bellamy et al, 2013). Additionally, the probability of integrating several interventions was not tackled at all.

Among the reasons why geoengineering might not be a good idea, he points to the untested-irreversible environmental, social and political challenges (and changes) that may result from the process. Some of the reasons such as 2, 3 and 13 are based on a pre-assumption that no measures to restrict carbondioxide emission will be enforced along with the albedo measures, and thus that “geoengineering” allegedly leads to “continued ocean acidification”, “danger of ozone depletion” and “undermining emissions mitigation”. In this case the three reasons are erratically linked to geoengineering while they are more related to governance, ethics, education and culture. Reason 5-“More acid deposition” is very limited to the case of recurrently injecting “sulphate” into the stratosphere, while other alternatives were introduced earlier in the book but not thoroughly explored. Some reasons such as 1- “Effects on regional climate”; 4- “Effects on plants“, 6- “Effects of cirrus clouds”, 19- “Environmental impacts of implementation”, 10- “Rapid warming if deployment stops”, 8- “Less sun for solar power” and 20- the “unexpected consequences” are reasons for more research and appraisal rather than slamming the whole project. Do we, for example, use up all the solar energy falling onto the earth every day and would thus suffer a shortage due to the albedo measures or that the global shift to renewable energy is more of a governance issue? It is obvious here, that the ethical, political and cultural dimensions of geoengineering are the ones worthy of serious concerns (Battersby, 2012; Royal Society). How can such aspects be evaluated through a mono-speciality perspective? Geoengineering as an act of ecological restoration cannot be confined to the attempts of “cleaning our environmental mess”, but is rather a “perfect moral storm” (Gardiner, 2006), as it entails controversial collective

decision-making process and action! Robock states at least 4 reasons where that is true: The fact that “there is no going back”, the fear of “commercial control of technology”, “military use of the technology” and the issue of who would “control of the thermostat”. The points 12- “Human error” factors, 14“Cost” and “17- “Conflicts with current treaties” remain negotiable compared to the prospective consequences of inaction.

It is worthy to note here that our human capacity of observation involves the simultaneous or deliberate manipulation of life fundamentals (Umpleby, 2007), and thus inaction while knowing the consequences is also a form of geoengineering and is still an option that we will be held accountable for before the coming generations (Victor, 2009). It is likely in this case that governments will be forced at a certain point in the future to take emergency measures, if the climate takes a sudden dangerous turn threatening millions of species and habitats. Unfortunately, based on such kind of research, some “big” media outlets as The Guardian (2014) gets to report the “ineffective” and “disastrous consequences” of geoengineering [1] to the public and inevitably influence the decision-making process, while in contrast with the book title and argument, geoengineering my not be a bad idea but one needing further research, fund, modelling and an insightful engagement of stakeholders (Bellamy et al, 2013) in a new trend of global governance. The Book: Robock, A. (2008) 20 reasons why geoengineering may be a bad idea. Bulletin of the Atomic Scientist. Vol. 64, No. 2, p. 14-18, 59 Reference list: Battersby, S. (2012) Can geoengineering avert climate chaos? NewScientist. Magazine issue 2883. Available at [http://www.newscientist.com/article/mg21528831.700-can-geoengineeringavert-climate-chaos.html?full=true#.VRMRav1FAdU] accessed on 05/05/2015.