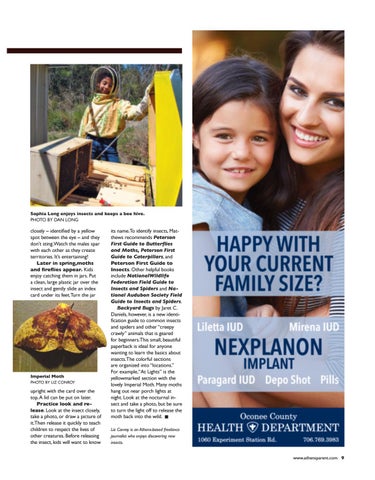 closely – identified by a yellow spot between the eye – and they don’t sting.Watch the males spar with each other as they create territories. It’s entertaining! Later in spring,moths and fireflies appear. Kids enjoy catching them in jars. Put a clean, large plastic jar over the insect and gently slide an index card under its feet.Turn the jar

upright with the card over the top. A lid can be put on later. Practice look and release. Look at the insect closely, take a photo, or draw a picture of it.Then release it quickly to teach children to respect the lives of other creatures. Before releasing the insect, kids will want to know

its name.To identify insects, Matthews recommends Peterson First Guide to Butterflies and Moths, Peterson First Guide to Caterpillars, and Peterson First Guide to Insects. Other helpful books include NationalWildlife Federation Field Guide to Insects and Spiders and National Audubon Society Field Guide to Insects and Spiders. Backyard Bugs by Jaret C. Daniels, however, is a new identification guide to common insects and spiders and other “creepy crawly” animals that is geared for beginners.This small, beautiful paperback is ideal for anyone wanting to learn the basics about insects.The colorful sections are organized into “locations.” For example,“At Lights” is the yellowmarked section with the lovely Imperial Moth. Many moths hang out near porch lights at night. Look at the nocturnal insect and take a photo, but be sure to turn the light off to release the moth back into the wild. n Liz Conroy is an Athens-based freelance journalist who enjoys discovering new insects. www.athensparent.com 9