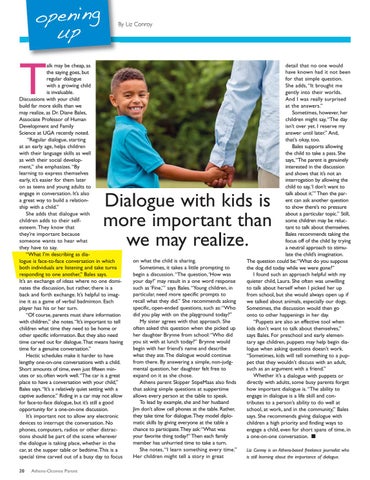 alk may be cheap, as the saying goes, but regular dialogue with a growing child is invaluable. Discussions with your child build far more skills than we may realize, as Dr. Diane Bales, Associate Professor of Human Development and Family Science at UGA recently noted. “Regular dialogue, starting at an early age, helps children with their language skills as well as with their social development,” she emphasizes. “By learning to express themselves early, it’s easier for them later on as teens and young adults to engage in conversation. It’s also a great way to build a relationship with a child.” She adds that dialogue with children adds to their selfesteem. They know that they’re important because someone wants to hear what they have to say. “What I’m describing as dialogue is face-to-face conversation in which both individuals are listening and take turns responding to one another,” Bales says. It’s an exchange of ideas where no one dominates the discussion, but rather, there is a back and forth exchange. It’s helpful to imagine it as a game of verbal badminton. Each player has his or her turn. “Of course, parents must share information with children,” she notes.“It’s important to tell children what time they need to be home or other specific information. But they also need time carved out for dialogue.That means having time for a genuine conversation.” Hectic schedules make it harder to have lengthy one-on-one conversations with a child. Short amounts of time, even just fifteen minutes or so, often work well.“The car is a great place to have a conversation with your child,” Bales says.“It’s a relatively quiet setting with a captive audience.” Riding in a car may not allow for face-to-face dialogue, but it’s still a good opportunity for a one-on-one discussion. It’s important not to allow any electronic devices to interrupt the conversation. No phones, computers, radios or other distractions should be part of the scene wherever the dialogue is taking place, whether in the car, at the supper table or bedtime.This is a special time carved out of a busy day to focus

detail that no one would have known had it not been for that simple question. She adds, “It brought me gently into their worlds. And I was really surprised at the answers.” Sometimes, however, her children might say, “The day isn’t over yet. I reserve my answer until later.” And, that’s okay, too. Bales supports allowing the child to take a pass. She says,“The parent is genuinely interested in the discussion and shows that it’s not an interrogation by allowing the child to say,‘I don’t want to talk about it.’” Then the parent can ask another question to show there’s no pressure about a particular topic.” Still, some children may be reluctant to talk about themselves. Bales recommends taking the focus off of the child by trying a neutral approach to stimulate the child’s imagination. The question could be:“What do you suppose the dog did today while we were gone?” I found such an approach helpful with my quieter child, Laura. She often was unwilling to talk about herself when I picked her up from school, but she would always open up if we talked about animals, especially our dogs. Sometimes, the discussion would then go onto to other happenings in her day. “Puppets are also an effective tool when kids don’t want to talk about themselves,” says Bales. For preschool and early elementary age children, puppets may help begin dialogue when asking questions doesn’t work. “Sometimes, kids will tell something to a puppet that they wouldn’t discuss with an adult, such as an argument with a friend.” Whether it’s a dialogue with puppets or directly with adults, some busy parents forget how important dialogue is. “The ability to engage in dialogue is a life skill and contributes to a person’s ability to do well at school, at work, and in the community,” Bales says. She recommends giving dialogue with children a high priority and finding ways to engage a child, even for short spans of time, in a one-on-one conversation. ■

Dialogue with kids is more important than we may realize.

on what the child is sharing. Sometimes, it takes a little prompting to begin a discussion. “The question, ‘How was your day?’ may result in a one word response such as ‘Fine,’” says Bales. “Young children, in particular, need more specific prompts to recall what they did.” She recommends asking specific, open-ended questions, such as: “Who did you play with on the playground today?” My sister agrees with that approach. She often asked this question when she picked up her daughter Brynne from school: “Who did you sit with at lunch today?” Brynne would begin with her friend’s name and describe what they ate.The dialogue would continue from there. By answering a simple, non-judgmental question, her daughter felt free to expand on it as she chose. Athens parent Skipper StipeMaas also finds that asking simple questions at suppertime allows every person at the table to speak. To lead by example, she and her husband Jim don’t allow cell phones at the table. Rather, they take time for dialogue.They model diplomatic skills by giving everyone at the table a chance to participate.They ask:“What was your favorite thing today?” Then each family member has unhurried time to take a turn. She notes, “I learn something every time.” Her children might tell a story in great

Liz Conroy is an Athens-based freelance journalist who is still learning about the importance of dialogue.