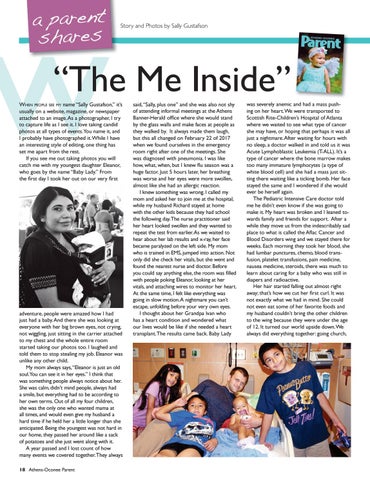 Story and Photos by Sally Gustafson

WHEN PEOPLE SEE MY name “Sally Gustafson,” it’s usually on a website, magazine, or newspaper attached to an image. As a photographer, I try to capture life as I see it. I love taking candid photos at all types of events.You name it, and I probably have photographed it. While I have an interesting style of editing, one thing has set me apart from the rest. If you see me out taking photos you will catch me with my youngest daughter Eleanor, who goes by the name “Baby Lady.” From the first day I took her out on our very first

adventure, people were amazed how I had just had a baby. And there she was looking at everyone with her big brown eyes, not crying, not wiggling, just sitting in the carrier attached to my chest and the whole entire room started taking our photos too. I laughed and told them to stop stealing my job. Eleanor was unlike any other child. My mom always says, “Eleanor is just an old soul.You can see it in her eyes.” I think that was something people always notice about her. She was calm, didn’t mind people, always had a smile, but everything had to be according to her own terms. Out of all my four children, she was the only one who wanted mama at all times, and would even give my husband a hard time if he held her a little longer than she anticipated. Being the youngest was not hard in our home, they passed her around like a sack of potatoes and she just went along with it. A year passed and I lost count of how many events we covered together. They always 18 Athens-Oconee Parent

said, “Sally, plus one” and she was also not shy of attending informal meetings at the Athens Banner-Herald office where she would stand by the glass walls and make faces at people as they walked by. It always made them laugh, but this all changed on February 22 of 2017 when we found ourselves in the emergency room right after one of the meetings. She was diagnosed with pneumonia. I was like how, what, when, but I knew flu season was a huge factor. Just 5 hours later, her breathing was worse and her eyes were more swollen, almost like she had an allergic reaction. I knew something was wrong. I called my mom and asked her to join me at the hospital, while my husband Richard stayed at home with the other kids because they had school the following day. The nurse practitioner said her heart looked swollen and they wanted to repeat the test from earlier. As we waited to hear about her lab results and x-ray, her face became paralyzed on the left side. My mom who is trained in EMS, jumped into action. Not only did she check her vitals, but she went and found the nearest nurse and doctor. Before you could say anything else, the room was filled with people poking Eleanor, looking at her vitals, and attaching wires to monitor her heart. At the same time, I felt like everything was going in slow motion. A nightmare you can’t escape, unfolding before your very own eyes. I thought about her Grandpa Ivan who has a heart condition and wondered what our lives would be like if she needed a heart transplant. The results came back. Baby Lady

was severely anemic and had a mass pushing on her heart. We were transported to Scottish Rite-Children’s Hospital of Atlanta where we waited to see what type of cancer she may have, or hoping that perhaps it was all just a nightmare. After waiting for hours with no sleep, a doctor walked in and told us it was Acute Lymphoblastic Leukemia (T-ALL). It’s a type of cancer where the bone marrow makes too many immature lymphocytes (a type of white blood cell) and she had a mass just sitting there waiting like a ticking bomb. Her face stayed the same and I wondered if she would ever be herself again. The Pediatric Intensive Care doctor told me he didn’t even know if she was going to make it. My heart was broken and I leaned towards family and friends for support. After a while they move us from the indescribably sad place to what is called the Aflac Cancer and Blood Disorders wing and we stayed there for weeks. Each morning they took her blood, she had lumbar punctures, chemo, blood transfusion, platelet transfusions, pain medicine, nausea medicine, steroids, there was much to learn about caring for a baby who was still in diapers and radioactive. Her hair started falling out almost right away; that’s how we cut her first curl. It was not exactly what we had in mind. She could not even eat some of her favorite foods and my husband couldn’t bring the other children to the wing because they were under the age of 12. It turned our world upside down. We always did everything together: going church, 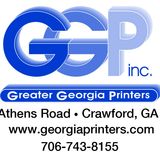