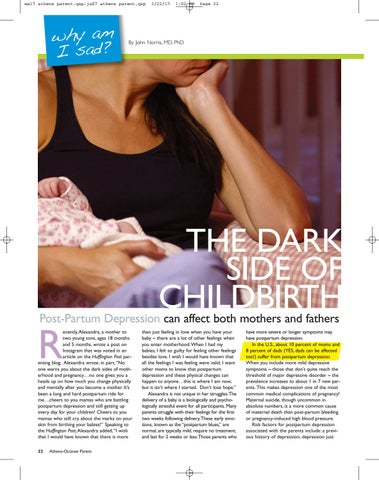 THE DARK SIDE OF CHILDBIRTH

Post-Partum Depression can affect both mothers and fathers

ecently, Alexandra, a mother to two young sons, ages 18 months and 5 months, wrote a post on Instagram that was noted in an article on the Huffington Post parenting blog. Alexandra wrote, in part, “No one warns you about the dark sides of motherhood and pregnancy…no one gives you a heads up on how much you change physically and mentally after you become a mother. It’s been a long and hard postpartum ride for me…cheers to you mamas who are battling postpartum depression and still getting up every day for your children! Cheers to you mamas who still cry about the marks on your skin from birthing your babies!” Speaking to the Huffington Post, Alexandra added, “I wish that I would have known that there is more 22

than just feeling in love when you have your baby – there are a lot of other feelings when you enter motherhood.When I had my babies, I felt so guilty for feeling other feelings besides love. I wish I would have known that all the feelings I was feeling were valid. I want other moms to know that postpartum depression and these physical changes can happen to anyone…this is where I am now, but it isn’t where I started. Don’t lose hope.” Alexandra is not unique in her struggles.The delivery of a baby is a biologically and psychologically stressful event for all participants. Many parents struggle with their feelings for the first two weeks following delivery.These early emotions, known as the “postpartum blues,” are normal, are typically mild, require no treatment, and last for 2 weeks or less.Those parents who

have more severe or longer symptoms may have postpartum depression. In the U.S., about 10 percent of moms and 8 percent of dads (YES, dads can be affected too!) suffer from postpartum depression. When you include more mild depressive symptoms – those that don’t quite reach the threshold of major depressive disorder – the prevalence increases to about 1 in 7 new parents. This makes depression one of the most common medical complications of pregnancy! Maternal suicide, though uncommon in absolute numbers, is a more common cause of maternal death than post-partum bleeding or pregnancy-induced high blood pressure. Risk factors for postpartum depression associated with the parents include: a previous history of depression, depression just