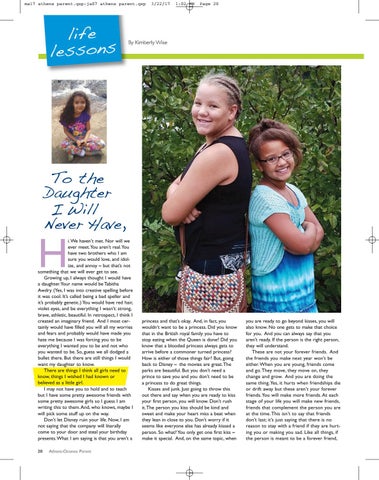 To the Daughter I Will Never Have,

i.We haven’t met. Nor will we ever meet.You aren’t real.You have two brothers who I am sure you would love, and idolize, and annoy – but that’s not something that we will ever get to see. Growing up, I always thought I would have a daughter.Your name would be Tabitha Awdry (Yes, I was into creative spelling before it was cool. It’s called being a bad speller and it’s probably genetic.) You would have red hair, violet eyes, and be everything I wasn’t: strong, brave, athletic, beautiful. In retrospect, I think I created an imaginary friend. And I most certainly would have filled you will all my worries and fears and probably would have made you hate me because I was forcing you to be everything I wanted you to be and not who you wanted to be. So, guess we all dodged a bullet there. But there are still things I would want my daughter to know. There are things I think all girls need to know, things I wished I had known or believed as a little girl. I may not have you to hold and to teach but I have some pretty awesome friends with some pretty awesome girls so I guess I am writing this to them. And, who knows, maybe I will pick some stuff up on the way. Don’t let Disney ruin your life. Now, I am not saying that the company will literally come to your door and steal your birthday presents.What I am saying is that you aren’t a

princess and that’s okay. And, in fact, you wouldn’t want to be a princess. Did you know that in the British royal family you have to stop eating when the Queen is done? Did you know that a blooded princess always gets to arrive before a commoner turned princess? How is either of those things fair? But, going back to Disney – the movies are great.The parks are beautiful. But you don’t need a prince to save you and you don’t need to be a princess to do great things. Kisses and junk. Just going to throw this out there and say when you are ready to kiss your first person, you will know. Don’t rush it.The person you kiss should be kind and sweet and make your heart miss a beat when they lean in close to you. Don’t worry if it seems like everyone else has already kissed a person. So what? You only get one first kiss – make it special. And, on the same topic, when

you are ready to go beyond kisses, you will also know. No one gets to make that choice for you. And you can always say that you aren’t ready. If the person is the right person, they will understand. These are not your forever friends. And the friends you make next year won’t be either. When you are young, friends come and go. They move, they move on, they change and grow. And you are doing the same thing.Yes, it hurts when friendships die or drift away but these aren’t your forever friends.You will make more friends. At each stage of your life you will make new friends, friends that complement the person you are at the time. This isn’t to say that friends don’t last; it’s just saying that there is no reason to stay with a friend if they are hurting you or making you sad. Like all things, if the person is meant to be a forever friend,