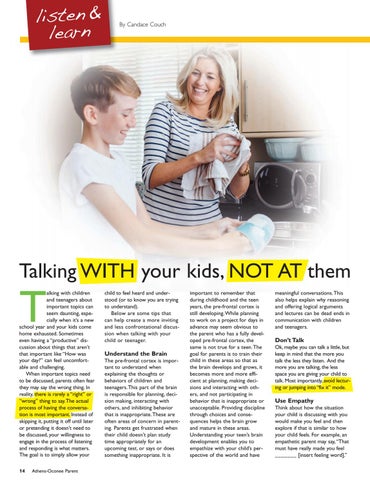 Talking WITH your kids, NOT AT them

alking with children and teenagers about important topics can seem daunting, especially when it’s a new school year and your kids come home exhausted. Sometimes even having a “productive” discussion about things that aren’t that important like “How was your day?” can feel uncomfortable and challenging. When important topics need to be discussed, parents often fear they may say the wrong thing. In reality, there is rarely a “right” or “wrong” thing to say.The actual process of having the conversation is most important. Instead of skipping it, putting it off until later or pretending it doesn’t need to be discussed, your willingness to engage in the process of listening and responding is what matters. The goal is to simply allow your 14

child to feel heard and understood (or to know you are trying to understand). Below are some tips that can help create a more inviting and less confrontational discussion when talking with your child or teenager.

Understand the Brain The pre-frontal cortex is important to understand when explaining the thoughts or behaviors of children and teenagers.This part of the brain is responsible for planning, decision making, interacting with others, and inhibiting behavior that is inappropriate.These are often areas of concern in parenting. Parents get frustrated when their child doesn’t plan study time appropriately for an upcoming test, or says or does something inappropriate. It is

important to remember that during childhood and the teen years, the pre-frontal cortex is still developing.While planning to work on a project for days in advance may seem obvious to the parent who has a fully developed pre-frontal cortex, the same is not true for a teen.The goal for parents is to train their child in these areas so that as the brain develops and grows, it becomes more and more efficient at planning, making decisions and interacting with others, and not participating in behavior that is inappropriate or unacceptable. Providing discipline through choices and consequences helps the brain grow and mature in these areas. Understanding your teen’s brain development enables you to empathize with your child’s perspective of the world and have

meaningful conversations.This also helps explain why reasoning and offering logical arguments and lectures can be dead ends in communication with children and teenagers.

Don’t Talk Ok, maybe you can talk a little, but keep in mind that the more you talk the less they listen. And the more you are talking, the less space you are giving your child to talk. Most importantly, avoid lecturing or jumping into “fix it” mode.

Use Empathy Think about how the situation your child is discussing with you would make you feel and then explore if that is similar to how your child feels. For example, an empathetic parent may say, “That must have really made you feel _______ [insert feeling word].”