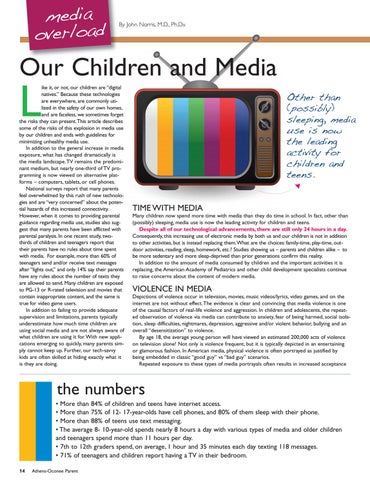 Our Children and Media

ike it, or not, our children are “digital natives.” Because these technologies are everywhere, are commonly utilized in the safety of our own homes, and are faceless, we sometimes forget the risks they can present.This article describes some of the risks of this explosion in media use by our children and ends with guidelines for minimizing unhealthy media use. In addition to the general increase in media exposure, what has changed dramatically is the media landscape.TV remains the predominant medium, but nearly one-third of TV programming is now viewed on alternative platforms – computers, tablets, or cell phones. National surveys report that many parents feel overwhelmed by this rush of new technologies and are “very concerned” about the potential hazards of this increased connectivity. However, when it comes to providing parental guidance regarding media use, studies also suggest that many parents have been afflicted with parental paralysis. In one recent study, twothirds of children and teenagers report that their parents have no rules about time spent with media. For example, more than 60% of teenagers send and/or receive text messages after “lights out,” and only 14% say their parents have any rules about the number of texts they are allowed to send. Many children are exposed to PG-13 or R-rated television and movies that contain inappropriate content, and the same is true for video game users. In addition to failing to provide adequate supervision and limitations, parents typically underestimate how much time children are using social media and are not always aware of what children are using it for.With new applications emerging so quickly, many parents simply cannot keep up. Further, our tech-savvy kids are often skilled at hiding exactly what it is they are doing.

VIOLENCE IN MEDIA Depictions of violence occur in television, movies, music videos/lyrics, video games, and on the internet are not without effect.The evidence is clear and convincing that media violence is one of the causal factors of real-life violence and aggression. In children and adolescents, the repeated observation of violence via media can contribute to anxiety, fear of being harmed, social isolation, sleep difficulties, nightmares, depression, aggressive and/or violent behavior, bullying and an overall “desensitization” to violence. By age 18, the average young person will have viewed an estimated 200,000 acts of violence on television alone! Not only is violence frequent, but it is typically depicted in an entertaining or glamorous fashion. In American media, physical violence is often portrayed as justified by being embedded in classic “good guy” vs “bad guy” scenarios. Repeated exposure to these types of media portrayals often results in increased acceptance

the numbers • More than 84% of children and teens have internet access. • More than 75% of 12- 17-year-olds have cell phones, and 80% of them sleep with their phone. • More than 88% of teens use text messaging. • The average 8- 10-year-old spends nearly 8 hours a day with various types of media and older children and teenagers spend more than 11 hours per day. • 7th to 12th graders spend, on average, 1 hour and 35 minutes each day texting 118 messages. • 71% of teenagers and children report having a TV in their bedroom. 14