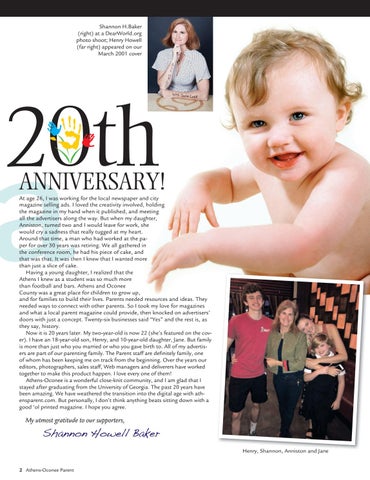 At age 26, I was working for the local newspaper and city magazine selling ads. I loved the creativity involved, holding the magazine in my hand when it published, and meeting all the advertisers along the way. But when my daughter, Anniston, turned two and I would leave for work, she would cry a sadness that really tugged at my heart. Around that time, a man who had worked at the paper for over 30 years was retiring. We all gathered in the conference room, he had his piece of cake, and that was that. It was then I knew that I wanted more than just a slice of cake. Having a young daughter, I realized that the Athens I knew as a student was so much more than football and bars. Athens and Oconee County was a great place for children to grow up, and for families to build their lives. Parents needed resources and ideas. They needed ways to connect with other parents. So I took my love for magazines and what a local parent magazine could provide, then knocked on advertisers’ doors with just a concept. Twenty-six businesses said “Yes” and the rest is, as they say, history. Now it is 20 years later. My two-year-old is now 22 (she’s featured on the cover). I have an 18-year-old son, Henry, and 10-year-old daughter, Jane. But family is more than just who you married or who you gave birth to. All of my advertisers are part of our parenting family. The Parent staff are definitely family, one of whom has been keeping me on track from the beginning. Over the years our editors, photographers, sales staff, Web managers and deliverers have worked together to make this product happen. I love every one of them! Athens-Oconee is a wonderful close-knit community, and I am glad that I stayed after graduating from the University of Georgia. The past 20 years have been amazing. We have weathered the transition into the digital age with athensparent.com. But personally, I don’t think anything beats sitting down with a good ‘ol printed magazine. I hope you agree.

My utmost gratitude to our supporters,