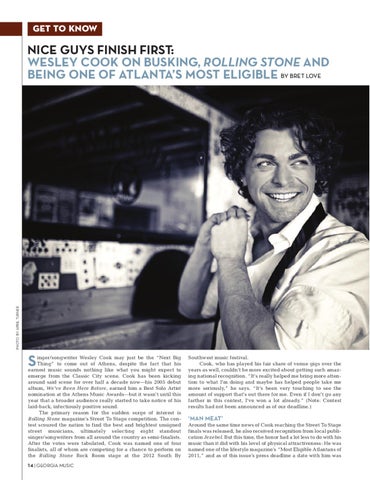 NICE GUYS FINISH FIRST: WESLEY COOK ON BUSKING, ROLLING STONE AND BEING ONE OF ATLANTA’S MOST ELIGIBLE BY BRET LOVE

inger/songwriter Wesley Cook may just be the “Next Big Thing” to come out of Athens, despite the fact that his earnest music sounds nothing like what you might expect to emerge from the Classic City scene. Cook has been kicking around said scene for over half a decade now—his 2005 debut album, We’ve Been Here Before, earned him a Best Solo Artist nomination at the Athens Music Awards—but it wasn’t until this year that a broader audience really started to take notice of his laid-back, infectiously positive sound. The primary reason for the sudden surge of interest is Rolling Stone magazine’s Street To Stage competition. The contest scoured the nation to find the best and brightest unsigned street musicians, ultimately selecting eight standout singer/songwriters from all around the country as semi-finalists. After the votes were tabulated, Cook was named one of four finalists, all of whom are competing for a chance to perform on the Rolling Stone Rock Room stage at the 2012 South By 14 | GEORGIA MUSIC

Southwest music festival. Cook, who has played his fair share of venue gigs over the years as well, couldn’t be more excited about getting such amazing national recognition. “It&#39;s really helped me bring more attention to what I&#39;m doing and maybe has helped people take me more seriously,” he says. “It&#39;s been very touching to see the amount of support that&#39;s out there for me. Even if I don&#39;t go any farther in this contest, I&#39;ve won a lot already.” (Note: Contest results had not been announced as of our deadline.)

‘MAN MEAT’ Around the same time news of Cook reaching the Street To Stage finals was released, he also received recognition from local publication Jezebel. But this time, the honor had a lot less to do with his music than it did with his level of physical attractiveness: He was named one of the lifestyle magazine’s “Most Eligible Atlantans of 2011,” and as of this issue’s press deadline a date with him was

Music editor Bret Love talks with singer/songwriter/producer Butch Walker about his musical path. Jewly Hight takes an in-depth look at the legendary Chet Atkins and how his early days in Georgia and later connections with Georgians influenced his career. Chris Hassiotis explores the Math Rock scene in Athens, as well as talks with Georgia Theatre owner Wilmot Greene about the venue’s recent re-opening after being destroyed by fire in 2009. Candice Dyer has a lively conversation with Karen Peck, leader of the gospel group New River, and she visits Columbus to experience its music and people. “Get To Know” profiles Wesley Cook, Rico Love and Lera Lynn and reviews include Rich Robinson, Casper & The Cookies, Dex Romweber, Indigo Girls, Larkin Poe, The Whiskey Gentry and more.