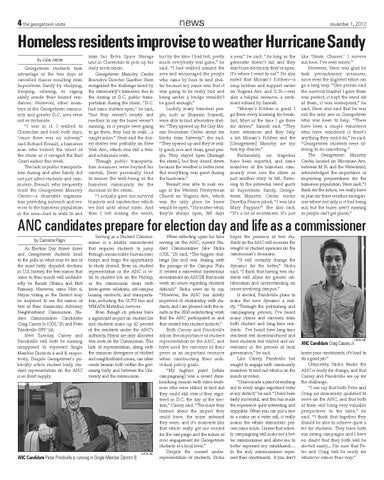 Homeless residents improvise to weather Hurricane Sandy by Julia Jester Georgetown students took advantage of the two days of cancelled classes resulting from Superstorm Sandy by studying, sleeping, relaxing, or raging safely inside their heated residences. However, other members of the Georgetown community and greater D.C. area were not so fortunate. “I was in it. I walked to Clarendon and back both days, ‘cause there was no subway,” said Richard Breault, a homeless man who braved the worst of the storm as it ravaged the East Coast earlier this week. The lack of public transportation during and after Sandy did not just affect students and commuters. Breault, who frequently visits the Georgetown Ministry Center—a charitable organization providing outreach and services to the homeless population in the area—had to walk to and

from his Extra Space Storage unit in Clarendon to pick up his daily medication. Georgetown Ministry Center Executive Director Gunther Stern recognized the challenge faced by the community’s homeless due to the closing of D.C. public transportation during the storm. “D.C. had some shelters open,” he said, “but they weren’t nearby and needless to say the buses weren’t running, so if people were going to go there, they had to walk…a couple miles.” Stern said the closest shelter was probably on New York Ave., which was still a twoand-a-half-mile walk. Though public transportation measures were beyond his control, Stern personally tried to ensure the well-being of the homeless community for the duration of the storm. “I actually gave out survival blankets and sandwiches which we had until about noon. And then I left fearing the worst,

but by the time I had left, pretty much everybody was gone,” he said. “I had walked around the area and encouraged the people who came by here to find shelter because my sense was that it was going to be really bad and being under a bridge wouldn’t be good enough.” Luckily, many homeless people, such as Shannon Scannell, were able to find alternative shelter. “They opened up the Guy Mason Recreation Center about ten blocks from Safeway,” she said. “They opened up and they’re really great, nice and clean, great people. They stayed open [through the storm], but they closed down because the weather is better now. But everything was great during the hurricane.” Breault was able to seek refuge at the Western Presbyterian Church on Virginia Ave., which was the only place he knew would be open. “No matter what, they’re always open, 365 days

a year,” he said. “As long as the generator doesn’t fail and they don’t lose electricity, they’re open. It’s where I went to eat.” He also noted that Miriam’s Kitchen—a soup kitchen and support center on Virginia Ave. and G St.—was also a helpful resource, a sentiment echoed by Sannell. “Miriam’s Kitchen is great, I go there every morning for breakfast. Most of the time I go there for dinner,” Sannell said. “They have references and they help a lot. Miriam’s Kitchen and the [Georgetown] Ministry are my two top choices.” Fortunately, no tragedies have been reported, and some members of the homeless community even saw the storm as just another story to tell. Referring to the powerful wind gusts of Superstorm Sandy, Georgetown Ministry Center visitor Doretha Pearce joked, “I was like Mary Poppins!” She also said, “It’s a lot of excitement. It’s just

Serving as a Student Commissioner is a sizable commitment that requires students to jump through innumerable bureaucratic hoops and forgo the opportunity to study abroad. Even so, student representation in the ANC is vital to student life on the Hilltop, as the commission deals with town-gown relations, off-campus leasing contracts, and transportation, including the GUTS bus and WMATA Metrobus services. Even though its policies have a significant impact on student life and students make up 42 percent of the residents under the ANC’s authority, Hoyas are only allocated two seats on the Commission. This lack of representation, along with the common divergence of student and neighborhood issues, can often create tension both within the governing body and between the University and the commission.

When reflecting upon his time serving on the ANC, current Student Commissioner Jake Sticka (COL ’13) said, “The biggest challenge [for me] was dealing with the passage of the Campus Plan. It created a somewhat contentious environment on ANC2E that made work on issues regarding students difficult.” Sticka went on to say, “However, the ANC has slowly improved its relationship with students, and I am pleased with the results of the 2010 redistricting work that the ANC participated in and that created two student districts.” Both Cassey and Prindiville affirm the importance of student representation on the ANC, and have used the concerns of their peers as an important resource when constructing their individual policy goals. “My highest point [while campaigning] was a recent doorknocking session with some freshmen who were stoked to find out they could still vote if they registered in D.C. the day of the election,” Cassey said. “The more they learned about the impact they could have, the more onboard they were, and it’s moments like that which really get me excited for the campaign and the future of civic engagement for Georgetown students at a local level.” Despite the current underrepresentation of students, Sticka

hopes the presence of two students on the ANC will increase the weight of student opinions on the commission’s decisions. “It will certainly change the dynamic for the better,” Sticka said. “I think that having two students will allow for greater collaboration and understanding on issues involving campus.” If elected, Prindiville plans to make this new dynamic a reality. “Through the petitioning and campaigning process, I’ve heard many stories and concerns from both student and long-time residents. I’ve heard how long-time residents feel disenfranchised and how students feel vilified and unwelcome in the process of local governance,” he said. Like Cassey, Prindiville has sought to engage with community members to find out what is on the minds of voters. “I have made a point of reaching out to every single registered voter in my district,” he said. “I have been fairly successful, and this has made the experience quite interesting and enjoyable. When you can put a face to a name on a voter roll, it really makes the whole democratic process come to life. I know that actively campaigning will make me a better commissioner and allow me to better represent my constituents… In the end, commissioners represent their constituents. If you don’t

like ‘Storm Chasers.’ I survive out here. I’ve seen worse.” However, Stern was glad he took precautionary measures, since even the slightest effort can go a long way. “One person said the survival blanket I gave them was perfect, it kept the wind off of them, it was waterproof,” he said. Stern also said that he was not the only one in Georgetown who was keen to help. “There have been a couple volunteers who have wondered if there’s anything they could do,” he said. “Georgetown students were offering to do something.” The Georgetown Ministry Center, located on Wisconsin Ave. between M St. and the Waterfront, acknowledged the importance of improving preparedness for the homeless population. Stern said, “I think for the future, we really have to plan for these weather emergencies where not only is it bad being out, but the buses aren’t running so people can’t get places.”

ANC candidates prepare for election day and life as a commissioner by Caitriona Pagni As Election Day draws closer and Georgetown students head to the polls in what may be one of the most hotly disputed elections in U.S. history, the two names that come to their minds will undoubtedly be Barack Obama and Mitt Romney. However, come Nov. 6, Hoyas voting in the District may be surprised to see the names of two of their classmates: Advisory Neighborhood Commission Student Commissioner Candidates Craig Cassey Jr. (COL ’15) and Peter Prindiville (SFS ’14). Next Tuesday, Cassey and Prindiville will both be running unopposed to represent Single Member Districts 4 and 8, respectively. Despite Georgetown’s politically active student body, student representation on the ANC is in short supply.

know your constituents, it’s hard to do a good job.” Ultimately, Sticka thinks the ANC is ready for change, and that Cassey and Prindiville are up for the challenge. “I can say that both Peter and Craig are immensely qualified to serve on the ANC, and that both of them will bring very valuable perspectives to the table,” he said. “I think that together they should be able to achieve quite a bit for students. They have both run strong campaigns and I have no doubt that they both will be elected easily... I’m sure that Peter and Craig will be ready for whatever comes their way.” 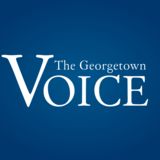