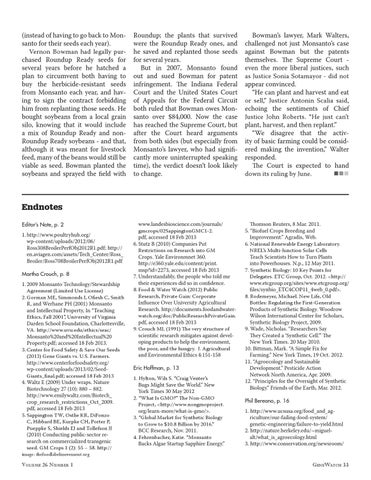 (instead of having to go back to Monsanto for their seeds each year). Vernon Bowman had legally purchased Roundup Ready seeds for several years before he hatched a plan to circumvent both having to buy the herbicide-resistant seeds from Monsanto each year, and having to sign the contract forbidding him from replanting those seeds. He bought soybeans from a local grain silo, knowing that it would include a mix of Roundup Ready and nonRoundup Ready soybeans - and that, although it was meant for livestock feed, many of the beans would still be viable as seed. Bowman planted the soybeans and sprayed the field with

Roundup; the plants that survived were the Roundup Ready ones, and he saved and replanted those seeds for several years. But in 2007, Monsanto found out and sued Bowman for patent infringement. The Indiana Federal Court and the United States Court of Appeals for the Federal Circuit both ruled that Bowman owes Monsanto over $84,000. Now the case has reached the Supreme Court, but after the Court heard arguments from both sides (but especially from Monsanto’s lawyer, who had significantly more uninterrupted speaking time), the verdict doesn’t look likely to change.

Bowman’s lawyer, Mark Walters, challenged not just Monsanto’s case against Bowman but the patents themselves. The Supreme Court even the more liberal justices, such as Justice Sonia Sotamayor - did not appear convinced. “He can plant and harvest and eat or sell,” Justice Antonin Scalia said, echoing the sentiments of Chief Justice John Roberts. “He just can’t plant, harvest, and then replant.” “We disagree that the activity of basic farming could be considered making the invention,” Walter responded. The Court is expected to hand down its ruling by June. nnn 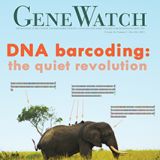