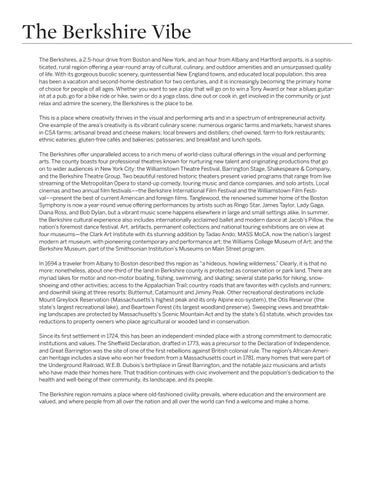 The Berkshire Vibe The Berkshires, a 2.5-hour drive from Boston and New York, and an hour from Albany and Hartford airports, is a sophisticated, rural region offering a year-round array of cultural, culinary, and outdoor amenities and an unsurpassed quality of life. With its gorgeous bucolic scenery, quintessential New England towns, and educated local population, this area has been a vacation and second-home destination for two centuries, and it is increasingly becoming the primary home of choice for people of all ages. Whether you want to see a play that will go on to win a Tony Award or hear a blues guitarist at a pub, go for a bike ride or hike, swim or do a yoga class, dine out or cook in, get involved in the community or just relax and admire the scenery, the Berkshires is the place to be. This is a place where creativity thrives in the visual and performing arts and in a spectrum of entrepreneurial activity. One example of the area’s creativity is its vibrant culinary scene: numerous organic farms and markets; harvest shares in CSA farms; artisanal bread and cheese makers; local brewers and distillers; chef-owned, farm-to-fork restaurants; ethnic eateries; gluten-free cafés and bakeries; patisseries; and breakfast and lunch spots. The Berkshires offer unparalleled access to a rich menu of world-class cultural offerings in the visual and performing arts. The county boasts four professional theatres known for nurturing new talent and originating productions that go on to wider audiences in New York City: the Williamstown Theatre Festival, Barrington Stage, Shakespeare &amp; Company, and the Berkshire Theatre Group. Two beautiful restored historic theaters present varied programs that range from live streaming of the Metropolitan Opera to stand-up comedy, touring music and dance companies, and solo artists. Local cinemas and two annual film festivals––the Berkshire International Film Festival and the Williamstown Film Festival––present the best of current American and foreign films. Tanglewood, the renowned summer home of the Boston Symphony is now a year-round venue offering performances by artists such as Ringo Star, James Taylor, Lady Gaga, Diana Ross, and Bob Dylan, but a vibrant music scene happens elsewhere in large and small settings alike. In summer, the Berkshire cultural experience also includes internationally acclaimed ballet and modern dance at Jacob’s Pillow, the nation’s foremost dance festival. Art, artifacts, permanent collections and national touring exhibitions are on view at four museums—the Clark Art Institute with its stunning addition by Tadao Ando; MASS MoCA, now the nation’s largest modern art museum, with pioneering contemporary and performance art; the Williams College Museum of Art; and the Berkshire Museum, part of the Smithsonian Institution’s Museums on Main Street program. In 1694 a traveler from Albany to Boston described this region as “a hideous, howling wilderness.” Clearly, it is that no more: nonetheless, about one-third of the land in Berkshire county is protected as conservation or park land. There are myriad lakes for motor and non-motor boating, fishing, swimming, and skating; several state parks for hiking, snowshoeing and other activities; access to the Appalachian Trail; country roads that are favorites with cyclists and runners; and downhill skiing at three resorts: Butternut, Catamount and Jiminy Peak. Other recreational destinations include Mount Greylock Reservation (Massachusetts’s highest peak and its only Alpine eco-system), the Otis Reservoir (the state’s largest recreational lake), and Beartown Forest (its largest woodland preserve). Sweeping views and breathtaking landscapes are protected by Massachusetts’s Scenic Mountain Act and by the state’s 61 statute, which provides tax reductions to property owners who place agricultural or wooded land in conservation. Since its first settlement in 1724, this has been an independent-minded place with a strong commitment to democratic institutions and values. The Sheffield Declaration, drafted in 1773, was a precursor to the Declaration of Independence, and Great Barrington was the site of one of the first rebellions against British colonial rule. The region’s African-American heritage includes a slave who won her freedom from a Massachusetts court in 1781, many homes that were part of the Underground Railroad, W.E.B. Dubois’s birthplace in Great Barrington, and the notable jazz musicians and artists who have made their homes here. That tradition continues with civic involvement and the population’s dedication to the health and well-being of their community, its landscape, and its people. The Berkshire region remains a place where old-fashioned civility prevails, where education and the environment are valued, and where people from all over the nation and all over the world can find a welcome and make a home.