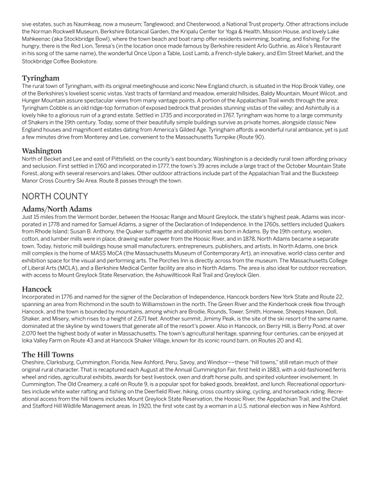 sive estates, such as Naumkeag, now a museum; Tanglewood; and Chesterwood, a National Trust property. Other attractions include the Norman Rockwell Museum, Berkshire Botanical Garden, the Kripalu Center for Yoga &amp; Health, Mission House, and lovely Lake Mahkeenac (aka Stockbridge Bowl), where the town beach and boat ramp offer residents swimming, boating, and fishing. For the hungry, there is the Red Lion, Teresa’s (in the location once made famous by Berkshire resident Arlo Guthrie, as Alice’s Restaurant in his song of the same name), the wonderful Once Upon a Table, Lost Lamb, a French-style bakery, and Elm Street Market, and the Stockbridge Coffee Bookstore.

The rural town of Tyringham, with its original meetinghouse and iconic New England church, is situated in the Hop Brook Valley, one of the Berkshires’s loveliest scenic vistas. Vast tracts of farmland and meadow, emerald hillsides, Baldy Mountain, Mount Wilcot, and Hunger Mountain assure spectacular views from many vantage points. A portion of the Appalachian Trail winds through the area; Tyringham Cobble is an old ridge-top formation of exposed bedrock that provides stunning vistas of the valley; and Ashintully is a lovely hike to a glorious ruin of a grand estate. Settled in 1735 and incorporated in 1767, Tyringham was home to a large community of Shakers in the 19th century. Today, some of their beautifully simple buildings survive as private homes, alongside classic New England houses and magnificent estates dating from America’s Gilded Age. Tyringham affords a wonderful rural ambiance, yet is just a few minutes drive from Monterey and Lee, convenient to the Massachusetts Turnpike (Route 90).

North of Becket and Lee and east of Pittsfield, on the county’s east boundary, Washington is a decidedly rural town affording privacy and seclusion. First settled in 1760 and incorporated in 1777, the town’s 39 acres include a large tract of the October Mountain State Forest, along with several reservoirs and lakes. Other outdoor attractions include part of the Appalachian Trail and the Bucksteep Manor Cross Country Ski Area. Route 8 passes through the town.

Just 15 miles from the Vermont border, between the Hoosac Range and Mount Greylock, the state’s highest peak, Adams was incorporated in 1778 and named for Samuel Adams, a signer of the Declaration of Independence. In the 1760s, settlers included Quakers from Rhode Island: Susan B. Anthony, the Quaker suffragette and abolitionist was born in Adams. By the 19th century, woolen, cotton, and lumber mills were in place, drawing water power from the Hoosic River, and in 1878, North Adams became a separate town. Today, historic mill buildings house small manufacturers, entrepreneurs, publishers, and artists. In North Adams, one brick mill complex is the home of MASS MoCA (the Massachusetts Museum of Contemporary Art), an innovative, world-class center and exhibition space for the visual and performing arts. The Porches Inn is directly across from the museum. The Massachusetts College of Liberal Arts (MCLA), and a Berkshire Medical Center facility are also in North Adams. The area is also ideal for outdoor recreation, with access to Mount Greylock State Reservation, the Ashuwillticook Rail Trail and Greylock Glen.

Incorporated in 1776 and named for the signer of the Declaration of Independence, Hancock borders New York State and Route 22, spanning an area from Richmond in the south to Williamstown in the north. The Green River and the Kinderhook creek flow through Hancock, and the town is bounded by mountains, among which are Brodie, Rounds, Tower, Smith, Honwee, Sheeps Heaven, Doll, Shaker, and Misery, which rises to a height of 2,671 feet. Another summit, Jimimy Peak, is the site of the ski resort of the same name, dominated at the skyline by wind towers that generate all of the resort’s power. Also in Hancock, on Berry Hill, is Berry Pond, at over 2,070 feet the highest body of water in Massachusetts. The town’s agricultural heritage, spanning four centuries, can be enjoyed at Ioka Valley Farm on Route 43 and at Hancock Shaker Village, known for its iconic round barn, on Routes 20 and 41.

Cheshire, Clarksburg, Cummington, Florida, New Ashford, Peru, Savoy, and Windsor––these “hill towns,” still retain much of their original rural character. That is recaptured each August at the Annual Cummington Fair, first held in 1883, with a old-fashioned ferris wheel and rides, agricultural exhibits, awards for best livestock, oxen and draft horse pulls, and spirited volunteer involvement. In Cummington, The Old Creamery, a café on Route 9, is a popular spot for baked goods, breakfast, and lunch. Recreational opportunities include white water rafting and fishing on the Deerfield River, hiking, cross country skiing, cycling, and horseback riding. Recreational access from the hill towns includes Mount Greylock State Reservation, the Hoosic River, the Appalachian Trail, and the Chalet and Stafford Hill Wildlife Management areas. In 1920, the first vote cast by a woman in a U.S. national election was in New Ashford.