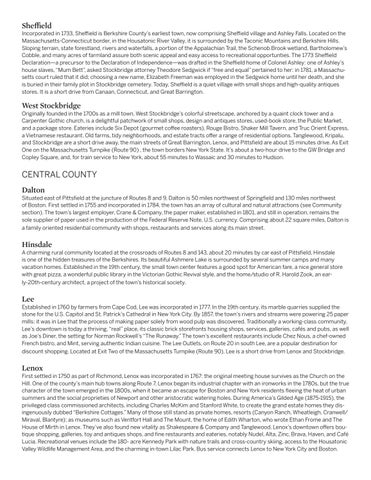 Incorporated in 1733, Sheffield is Berkshire County’s earliest town, now comprising Sheffield village and Ashley Falls. Located on the Massachusetts-Connecticut border, in the Housatonic River Valley, it is surrounded by the Taconic Mountains and Berkshire Hills. Sloping terrain, state forestland, rivers and waterfalls, a portion of the Appalachian Trail, the Schenob Brook wetland, Bartholomew’s Cobble, and many acres of farmland assure both scenic appeal and easy access to recreational opportunties. The 1773 Sheffield Declaration—a precursor to the Declaration of Independence—was drafted in the Sheffield home of Colonel Ashley: one of Ashley’s house slaves, “Mum Bett”, asked Stockbridge attorney Theodore Sedgwick if “free and equal” pertained to her: in 1781, a Massachusetts court ruled that it did; choosing a new name, Elizabeth Freeman was employed in the Sedgwick home until her death, and she is buried in their family plot in Stockbridge cemetery. Today, Sheffield is a quiet village with small shops and high-quality antiques stores. It is a short drive from Canaan, Connecticut, and Great Barrington.

Originally founded in the 1700s as a mill town, West Stockbridge’s colorful streetscape, anchored by a quaint clock tower and a Carpenter Gothic church, is a delightful patchwork of small shops, design and antiques stores, used-book store, the Public Market, and a package store. Eateries include Six Depot (gourmet coffee roasters), Rouge Bistro, Shaker Mill Tavern, and Truc Orient Express, a Vietnamese restaurant. Old farms, tidy neighborhoods, and estate tracts offer a range of residential options. Tanglewood, Kripalu, and Stockbridge are a short drive away, the main streets of Great Barrington, Lenox, and Pittsfield are about 15 minutes drive. As Exit One on the Massachusetts Turnpike (Route 90) , the town borders New York State. It’s about a two-hour drive to the GW Bridge and Copley Square, and, for train service to New York, about 55 minutes to Wassaic and 30 minutes to Hudson.

Situated east of Pittsfield at the juncture of Routes 8 and 9, Dalton is 50 miles northwest of Springfield and 130 miles northwest of Boston. First settled in 1755 and incorporated in 1784, the town has an array of cultural and natural attractions (see Community section). The town’s largest employer, Crane &amp; Company, the paper maker, established in 1801, and still in operation, remains the sole supplier of paper used in the production of the Federal Reserve Note, U.S. currency. Comprising about 22 square miles, Dalton is a family oriented residential community with shops, restaurants and services along its main street.

A charming rural community located at the crossroads of Routes 8 and 143, about 20 minutes by car east of Pittsfield, Hinsdale is one of the hidden treasures of the Berkshires. Its beautiful Ashmere Lake is surrounded by several summer camps and many vacation homes. Established in the 19th century, the small town center features a good spot for American fare, a nice general store with great pizza, a wonderful public library in the Victorian Gothic Revival style, and the home/studio of R. Harold Zook, an early-20th-century architect, a project of the town’s historical society.

Established in 1760 by farmers from Cape Cod, Lee was incorporated in 1777. In the 19th century, its marble quarries supplied the stone for the U.S. Capitol and St. Patrick’s Cathedral in New York City. By 1857, the town’s rivers and streams were powering 25 paper mills: it was in Lee that the process of making paper solely from wood pulp was discovered. Traditionally a working-class community, Lee’s downtown is today a thriving, “real” place, its classic brick storefronts housing shops, services, galleries, cafés and pubs, as well as Joe’s Diner, the setting for Norman Rockwell’s “The Runaway.” The town’s excellent restaurants include Chez Nous, a chef-owned French bistro, and Mint, serving authentic Indian cuisine. The Lee Outlets, on Route 20 in south Lee, are a popular destination for discount shopping. Located at Exit Two of the Massachusetts Turnpike (Route 90), Lee is a short drive from Lenox and Stockbridge.

First settled in 1750 as part of Richmond, Lenox was incorporated in 1767: the original meeting house survives as the Church on the Hill. One of the county’s main hub towns along Route 7, Lenox began its industrial chapter with an ironworks in the 1780s, but the true character of the town emerged in the 1800s, when it became an escape for Boston and New York residents fleeing the heat of urban summers and the social proprieties of Newport and other aristocratic watering holes. During America’s Gilded Age (1875-1915), the privileged class commissioned architects, including Charles McKim and Stanford White, to create the grand estate homes they disingenuously dubbed “Berkshire Cottages.” Many of those still stand as private homes, resorts (Canyon Ranch, Wheatleigh, Cranwell/ Miraval, Blantyre); as museums such as Ventfort Hall and The Mount, the home of Edith Wharton, who wrote Ethan Frome and The House of Mirth in Lenox. They’ve also found new vitality as Shakespeare &amp; Company and Tanglewood. Lenox’s downtown offers boutique shopping, galleries, toy and antiques shops, and fine restaurants and eateries, notably Nudel, Alta, Zinc, Brava, Haven, and Café Lucia. Recreational venues include the 180- acre Kennedy Park with nature trails and cross-country skiing, access to the Housatonic Valley Wildlife Management Area, and the charming in-town Lilac Park. Bus service connects Lenox to New York City and Boston.