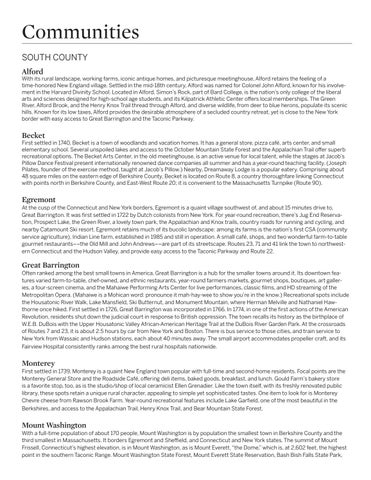 With its rural landscape, working farms, iconic antique homes, and picturesque meetinghouse, Alford retains the feeling of a time-honored New England village. Settled in the mid-18th century, Alford was named for Colonel John Alford, known for his involvement in the Harvard Divinity School. Located in Alford, Simon’s Rock, part of Bard College, is the nation’s only college of the liberal arts and sciences designed for high-school age students, and its Kilpatrick Athletic Center offers local memberships. The Green River, Alford Brook, and the Henry Knox Trail thread through Alford, and diverse wildlife, from deer to blue herons, populate its scenic hills. Known for its low taxes, Alford provides the desirable atmosphere of a secluded country retreat, yet is close to the New York border with easy access to Great Barrington and the Taconic Parkway.

First settled in 1740, Becket is a town of woodlands and vacation homes. It has a general store, pizza café, arts center, and small elementary school. Several unspoiled lakes and access to the October Mountain State Forest and the Appalachian Trail offer superb recreational options. The Becket Arts Center, in the old meetinghouse, is an active venue for local talent, while the stages at Jacob’s Pillow Dance Festival present internationally renowned dance companies all summer and has a year-round teaching facility. (Joseph Pilates, founder of the exercise method, taught at Jacob’s Pillow.) Nearby, Dreamaway Lodge is a popular eatery. Comprising about 48 square miles on the eastern edge of Berkshire County, Becket is located on Route 8, a country thoroughfare linking Connecticut with points north in Berkshire County, and East-West Route 20; it is convenient to the Massachusetts Turnpike (Route 90).

At the cusp of the Connecticut and New York borders, Egremont is a quaint village southwest of, and about 15 minutes drive to, Great Barrington. It was first settled in 1722 by Dutch colonists from New York. For year-round recreation, there’s Jug End Reservation, Prospect Lake, the Green River, a lovely town park, the Appalachian and Knox trails, country roads for running and cycling, and nearby Catamount Ski resort. Egremont retains much of its bucolic landscape: among its farms is the nation’s first CSA (community service agriculture), Indian Line farm, established in 1985 and still in operation. A small café, shops, and two wonderful farm-to-table gourmet restaurants––the Old Mill and John Andrews––are part of its streetscape. Routes 23, 71 and 41 link the town to northwestern Connecticut and the Hudson Valley, and provide easy access to the Taconic Parkway and Route 22.

Often ranked among the best small towns in America, Great Barrington is a hub for the smaller towns around it. Its downtown features varied farm-to-table, chef-owned, and ethnic restaurants, year-round farmers markets, gourmet shops, boutiques, art galleries, a four-screen cinema, and the Mahaiwe Performing Arts Center for live performances, classic films, and HD streaming of the Metropolitan Opera. (Mahaiwe is a Mohican word: pronounce it mah-hay-wee to show you’re in the know.) Recreational spots include the Housatonic River Walk, Lake Mansfield, Ski Butternut, and Monument Mountain, where Herman Melville and Nathaniel Hawthorne once hiked. First settled in 1726, Great Barrington was incorporated in 1766. In 1774, in one of the first actions of the American Revolution, residents shut down the judicial court in response to British oppression. The town recalls its history as the birthplace of W.E.B. DuBois with the Upper Housatonic Valley African-American Heritage Trail at the DuBois River Garden Park. At the crossroads of Routes 7 and 23, it is about 2.5 hours by car from New York and Boston. There is bus service to those cities, and train service to New York from Wassaic and Hudson stations, each about 40 minutes away. The small airport accommodates propeller craft, and its Fairview Hospital consistently ranks among the best rural hospitals nationwide.

First settled in 1739, Monterey is a quaint New England town popular with full-time and second-home residents. Focal points are the Monterey General Store and the Roadside Café, offering deli items, baked goods, breakfast, and lunch. Gould Farm’s bakery store is a favorite stop, too, as is the studio/shop of local ceramicist Ellen Grenadier. Like the town itself, with its freshly renovated public library, these spots retain a unique rural character, appealing to simple yet sophisticated tastes. One item to look for is Monterey Chevre cheese from Rawson Brook Farm. Year-round recreational features include Lake Garfield, one of the most beautiful in the Berkshires, and access to the Appalachian Trail, Henry Knox Trail, and Bear Mountain State Forest.

With a full-time population of about 170 people, Mount Washington is by population the smallest town in Berkshire County and the third smallest in Massachusetts. It borders Egremont and Sheffield, and Connecticut and New York states. The summit of Mount Frissell, Connecticut’s highest elevation, is in Mount Washington, as is Mount Everett, “the Dome,” which is, at 2,602 feet, the highest point in the southern Taconic Range. Mount Washington State Forest, Mount Everett State Reservation, Bash Bish Falls State Park,