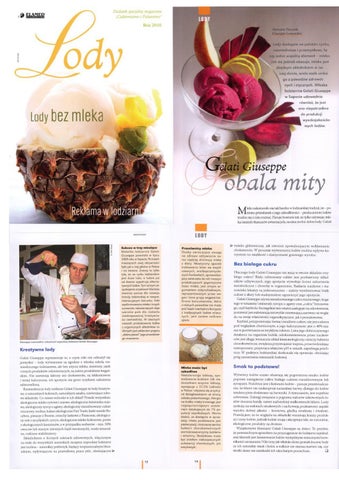 Translation of the article as it appeared in “Ice cream”, a 2010 “Pastry and bakery” magazine insert

„Gelati Giuseppe” dispels myths. Ice cream which is available here on the Polish market, whether it is produced by craft manner or on a large industrial scale has one element in common - milk. As it appears milk is a redundant ingredient in our diet, many people steer clear of milk for health or ethical reasons. “Gelati Giuseppe” the Italian ice-cream parlor in Sopot proves that milk is not necessary in the production of high quality ice-cream. [Text frame 1 - Milk can be harmful] Thirty seven point five percent of Poland’s population exhibit lactose intolerance (it’s caused by the lack or scarcity of enzyme lactase) and suffer from an unpleasant digestive tract ailments. Cow's milk protein allergy is the most popular one and up to seven percent of our youngest suffer from it. It’s good to add that milk which is available on the market nowadays undergoes the process of pasteurization destroying not only most pathogenic bacteria but also most of the valuable ones, as well as nutritious enzymes and vitamins; additionally such milk may contain dangerous chemical substances like antibiotics. [Text frame 2 - Opponents of milk] Health-conscious people often exclude milk from their diet. Unethical treatment of cows in modern huge industrial farms where those sensitive, intelligent animals are reduced to machines producing gigantic quantities of milk is a crucial anti-diary argument raised by both vegans and other vegetarian groups. The number of customers, who for different reasons cannot eat or have a reluctant attitude towards traditional milk based ice cream is therefore quite substantial. Milk is so deeply rooted in the ice cream manufacturing tradition that although there are some obvious premises indicating its harmfulness, ice cream manufacturers are reluctant to abandon it. There is widespread myth that high quality ice cream may be obtained only using milk and other animal fat in the manufacturing process. “Gelati Giuseppe” has entered the Polish ice cream world with an innovative project based on manufacturing ice cream in a craft manner using only natural ingredients, while ensuring the highest possible percentage of them are organic.

Creative ice cream “Gelati Giuseppe” represents that, which nobody had the guts to think up - an Italian ice cream craft manufacturing tradition but without using milk, cream, eggs and other animal products, it is entirely a vegan product. The ice cream does contain neither lactose nor cholesterol and it is easily digestible, less calorically dense and there is no risk of salmonella poisoning. Artisan, plant-based Gelati Giuseppe ice creams are characterized by creativity, with its natural colors, taste and healthy ingredients. What, then enters into their composition? First of all, “Gelati Giuseppe” ice cream contain: organic rice and soy milk, organic soy cream, organic agave syrup, organic unrefined cane sugar, inulin, organic Fair Trade cocoa, bourbon vanilla sticks, pistachios from Bronte, hazelnuts from Piedmont, organic juice with Sicilian lemons, organic coconut milk, green mashed chestnuts, in the case of sorbet min. 50% of fruit or vegetables (fresh or frozen), mineral water and vegetable stabilizers.

Inulin (a soluble fiber, natural prebiotic) having multiple health benefits including affecting the normal work of intestines, reducing the glycemic index, as well as slowing down absorption of cholesterol has been permanently included into all our author ice cream recipes. In the process of ice cream manufacturing, inulin positively affects softness and flexibility of the final product.

Without white sugar Why “Gelati Giuseppe” ice creams do not contain ordinary sugar? White, refined sugar is devoid of nutrients; its consumption causes a number of metabolic disorders and other ailments. Research and medical doctors’ standpoint are clear - eliminate it from your diet or drastically reduce its consumption. "Gelati Giuseppe" uses unrefined cane sugar, rich in vitamins and minerals, agave syrup and "birch sugar", or xylitol. The latter is especially worth mentioning as it’s extremely interesting, both because of its organoleptic and health inducing properties. Though baring a close resemblance to sugar comparing the form and taste, xylitol is not a sugar in terms of its chemical structure; its caloric density is 40% that of a normal sugar. The list of its benefits to the human body, documented by researchers, is long: it strengthens the immune system, destroys the pathogenic bacteria, increases calcium absorption, counteracts osteoporosis, restores the proper pH in the mouth and prevents tooth decay. In the process of ice cream manufacturing, it is an ideal agent, which lowers the freezing threshold of the ice cream mixture.

Taste is the foundation Manufacturers of ice cream are often afraid of worsening ice cream flavor by substituting white sugar with raw sugar or syrups. The same goes with ice cream color- there is a widespread belief that the client will not accept the natural color, so coloring agents are added just because it’s the norm. Meanwhile, quite the opposite is true: everyone, even the most disgruntled customers appreciate any treatments relating to improving health benefits of ice cream. Ice cream gain in taste and retain a fundamental aspect of product quality having creamy, smooth structure and durability. It is true that due to rising production costs of components prices of ice cream rise too, but people know and accept the fact that natural, organic products are more expensive. Children are Gelati Giuseppe’s very special clients. It's a shame that a common way to attract the youngest customers is stuffing ice cream with artificial dyes and intricate flavors. No one can appreciate the ice cream for their natural flavour and colour to the same degree as children do it; additionally parents need not worry about how the dessert will affect their beloved children. [Text frame 3 - Success in three months] “Gelati Giuseppe”, a tiny ice cream parlour was established in July 2009. After three months of its activity, it has already received some publicity in Poland and even abroad. What it means, is that there is a large gap in the market, and people have waited for a long time for alternative ice creams. In satisfying customer expectations, opportunities for the development of the ice cream industry in a new, exciting direction are created. Eliminating milk and other animal products, gives a lot of room for the flowering of unfettered creativity of the craftsman. Nowadays to produce ice cream with organic, plant ingredients is to give the concept of "good quality" its true meaning. Marzena Piszczek Giuseppe Lamandini www.gelatigiuseppe.pl 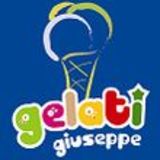 Dear Friends Gelati Giuseppe is a small company situated in Sopot, Poland. It's mission is to create and distribute 100% plant, organic ice...

Dear Friends Gelati Giuseppe is a small company situated in Sopot, Poland. It's mission is to create and distribute 100% plant, organic ice...