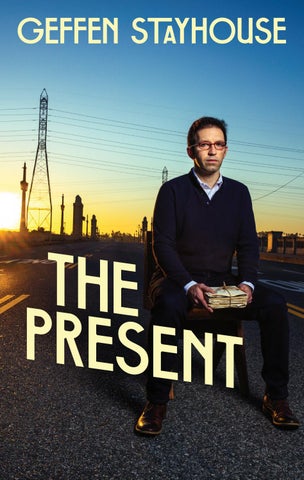 The Present is the Geffen’s first full virtual

shared need to connect—to laugh and be

production. More than that, it is an affirma-

tion that theatre can survive—and flourish— even in the most challenging of times.

While we seek to entertain, please know that you are doing us a tremendous service

by allowing the Geffen to do what we do

wowed us last season with Invisible

circumstances make that very difficult to

that brought spectators back again and

do. On behalf of the artists behind The

again to revel in the wondrous illusions and

Present and the staff of the Geffen, thank

inspirational storytelling. No one connects

you for that gift.

with an audience like Helder—his charisma and constant curiosity about this beautiful life we all share make him the ideal person to create theatre for our isolated present. Today you join in a unique communal experience—part happening on screen and part in your own hands. Though separated by distance, we are brought together by a 2 T H E P R ES E N T

All of us wish you and your families happiness and good health. Matt Shakman Artistic Director

THE PRESENT WRITTEN &amp; PERFORMED BY

70 minutes There will be no intermission. PLEASE NOTE

Helder Guimarães is a Portuguese-born performer, magician and creator of theatrical and immersive magic experiences. Recognized by The New York Times as “a master of illusions,” he is a World-Champion of Magic, two-time Parlor Magician of the Year by the Academy of Magical Arts and Ascanio Prize winner. Known for his unique approach to sleight-of-hand magic, storytelling and performance, Guimarães’ work has been featured at the Kennedy Center, TED Talks and Off-Broadway productions. His previous creations include Nothing to Hide, directed by Neil Patrick Harris, the Los Angeles sold-out Borrowed Time experience and the Off-Broadway theatrical Verso, directed by Rodrigo Santos. Using his knowledge of deception, Guimarães has consulted for major entertainment entities like NBC, Disney and Warner. As an example, he personally trained Oscar-winning actresses Sandra Bullock and Cate Blanchett for their roles in the movie Ocean’s 8. Most recently, Guimarães’ one-man show Invisible Tango made its world premiere in Los Angeles at the Geffen Playhouse. In their review of the production, the Los Angeles Times described him as “either a magician posing as a philosopher or a philosopher posing as a magician. But however you classify him, he’s excellent company in his new show, Invisible Tango.” Guimarães currently resides in Los Angeles.

Marshall is one of the premier film producers in the entertainment industry, with a career marked by classics like the Indiana Jones series, Back to the Future, Seabiscuit, The Color Purple, and the Jason Bourne series. Marshall’s work has earned him five Academy Award nominations for titles as diverse as The Sixth Sense and The Curious Case of Benjamin Button. In November 2018, he and wife Kathleen Kennedy received the Irving G. Thalberg Memorial Award, an honor presented to creative producers “whose body of work reflects a consistently high quality of motion picture production.” In addition to his prolific producing career, Marshall is also an accomplished director, having helmed Arachnophobia, Eight Below, Alive, and several documentaries, including the award-winning ESPN 30 for 30, Right to Play. An amateur magician since he was ten, he is currently directing How Can You Mend a Broken Heart, a documentary about the Bee Gees, and producing Jurassic World: Dominion on film and Diana: A True Musical Story, on Broadway.

Originally from Montreal, François-Pierre Couture has had the privilege of working in Los Angeles and the United States for the last decade as a scenic, lighting and projection designer. He has been teaching at East Los Angeles College, UCLA,

PRODUCTION BIOGRAPHIES She also designs for film, television, commercial, game developers and events. She received her M.F.A. from California Institute of the Arts and has taught at USC, CalTech, and Willamette University. She is a member of United Scenic Artists 829 and Costume Designers Guild 892. DA N I E L I O N A Z Z I

Recent designs for the Geffen Playhouse include Krapp’s Last Tape; Hughie; Chasing Mem’ries; Letters from a Nut by Ted L. Nancy; Icebergs; Thom Pain (based on nothing); Outside Mullingar; The Night Alive; Reasons to Be Pretty; Ruth Draper’s Monologues; Slowgirl; Build; Yes, Prime Minister; American Buffalo; The Jacksonian; Radiance; Red Hot Patriot and Superior Donuts. His work has also been seen at Steppenwolf Theatre Company, Berkeley Rep, Arena Stage, South Coast Repertory and Denver Center Theatre Company. His design for the New York production of The Jacksonian garnered a Lucille Lortel nomination. He designed the lighting installation for Teatro alla Moda for the Wallis Annenberg Center for the Performing Arts and Trajectoire and Catapult for the dance company Diavolo. His design work can also be seen in the 4-D cinematic experience Beyond all Boundaries at the National World War II Museum. Daniel is Producer for the Geffen Playhouse, and a member of the faculty of the UCLA School of Theater, Film and Television. He is the author of The Stage Management Handbook and The Stagecraft Handbook. AMY LEVINSON

Amy is the Associate Artistic Director at the Geffen Playhouse. During her tenure at the Geffen, she has spearheaded numerous programs for commissioning and developing new plays.

Dramaturgy credits include the commissions and world premieres of Donald Margulies’ Time Stands Still and Coney Island Christmas, Jane Anderson’s The Quality of Life and The Escort, Amanda Peet’s Our Very Own Carlin McCullough, and Michael Mitnick’s Mysterious Circumstances. Other dramaturgy credits include Actually, Invisible Tango, Extraordinary Chambers, Build, Equivocation, Joan Rivers: A Work in Progress by a Life in Progress, Guards at the Taj, and The Gift. She holds an M.F.A. in Dramaturgy from the University of Massachusetts, Amherst

Los Angeles magazine. Matt is a director and producer for FX’s It’s Always Sunny in Philadelphia and has directed episodes of Game of Thrones (DGA nomination), Mad Men, Fargo, The Good Wife, and Succession. He recently helmed the pilot episode for Hulu’s The Great starring Elle Fanning and Nicholas Hoult and is currently producing and directing all episodes of WandaVision, a Marvel Studios event series for Disney+ starring Paul Bettany and Elizabeth Olsen. At the Geffen, he will next direct Macbeth, starring Nikolaj Coster-Waldau.

Matt Shakman is Artistic Director of the Geffen Playhouse. In this role, he is responsible for identifying, developing and staging new work and revivals of classic plays with a focus on exceptional storytelling and audience experience. Matt recently helmed Mysterious Circumstances for the Geffen and prior to joining as Artistic Director in 2017, Shakman directed three acclaimed productions at the Playhouse: the West Coast premiere of David Lindsay-Abaire’s Good People (2012), the world premiere of Jeffrey Hatcher’s new adaptation of Wait Until Dark (2013), and Joshua Harmon’s Bad Jews (2015). Matt founded and was the artistic director of the Black Dahlia Theatre in Los Angeles, which was named “one of a dozen young American companies you need to know” by American Theatre magazine and “Best Small Theatre” by

Gil Cates, Jr. is Executive Director of Geffen Playhouse. In this role, he is responsible for managing the Geffen’s day-today operations; developing new, ongoing theater partnerships and leading its mission to inform, entertain and inspire diverse audiences with live theater of the highest caliber. Prior to being named Executive Director in 2015, Cates served as Geffen Playhouse Board Vice Chairman since 2012 and served as a producer and director in theater, film and television. His theater credits include the award-winning Names (Matrix Theatre Company) and Three Sisters and David Mamet’s A Life in the Theatre (both at Syracuse Stage). Cates’ film credits include The Surface (starring Sean Astin and Geffen Playhouse alumnus Chris Mulkey), Jobs (starring Ashton Kutcher, Josh Gad, Dermot Mulroney, as well as Geffen Playhouse alumni Matthew G E F F E N P L AY H O U S E 5

THE NEW PLAY DEVELOPMENT PROGRAM Supporting artists is central to the mission of the Geffen Playhouse, and play commissions are a cornerstone of that support. To commission a playwright to write a play means making a commitment to their voice, craft and vision, with the hope of sharing the fruits of their work on our stage. The Geffen Playhouse’s New Play Development Program is made possible, in large part, through the leadership and generosity of donations from: The Edgerton Foundation, The Harold &amp; Mimi Steinberg Charitable Trust, Fay &amp; Frank Mancuso, Sandra Krause &amp; William Fitzgerald, Hilary &amp; Jack Angelo and Mary Bianco, The MOCA Foundation. We are proud to have the following artists under commission: RACHEL BONDS

THE WRITERS’ ROOM A group for Los Angeles-based playwrights, The Writers’ Room is a product of the Geffen’s deep commitment to supporting new plays and specifically to fostering bold, relevant work by the vibrant artistic community of this city. During this one-year residency, playwright members gather monthly at the Geffen to share their work and receive feedback from their peers and the Geffen’s artistic staff, culminating in a play reading series. The Writers’ Room is made possible through the support of Patricia Kiernan Applegate. BONI B. ALVAREZ

PRODUCTION STAFF FOR THE PRESENT

ANNUAL DONORS Geffen Playhouse recognizes the following individuals and organizations for their generous support of our Annual Fund and Backstage at the Geffen. Donors are listed at the Associate level and higher for gifts made between January 1, 2019 and April 30, 2020. In appreciation, donors enjoy a host of special benefits including house seats, complimentary drinks, receptions, and much more. For more information, please call Christine Drew Benjamin at 310.208.6500 ext. 195. ANGELS $100,000+

Program for the world premiere Geffen Stayhouse production of The Present.