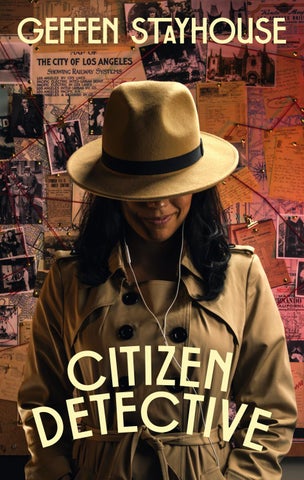 Welcome to Citizen Detective! As with each

the perfect person to create a show about

of our Geffen Stayhouse shows, this virtual

the world of true crime fandom. We are

offering invites you, the audience, to partic-

delighted to have her work on our “stage”

ipate in the narrative in an entirely new

for the first time.

way. You are a crucial part of this story—the clues you find and decisions you make will determine which direction the show takes. As Citizen Detective brings us together in this time of separation and isolation, it also explores our collective obsession with true crime and asks why we are driven to solve the seemingly impossible.

While we at the Geffen deeply miss seeing you in the theater, it is thrilling to continue to find innovative ways to connect with you over virtual platforms. Your enthusiasm and hunger for live theater drive us to expand our horizons in this arena, and we look forward to bringing you Helder Guimares’ The Future and Sri Rao’s Bollywood Kitchen

in the coming months. Each Stayhouse

Marcantel in the inaugural year of our

show promises a mix of interaction and

Writers’ Room play development program, and we have happily continued an artistic partnership ever since. Chelsea has a

storytelling, and, of course, lots of fun. Enjoy Citizen Detective—we are so glad to have you on the case!

the fringe, and it was clear that she was

85 minutes There will be no intermission. PLEASE NOTE

Chelsea Marcantel is an LAbased writer, director, and collaborator. Reared by Cajuns in southwest Louisiana, Chelsea has lived and made theatre among the peoples of the Midwest, Appalachia, the Mid-Atlantic, and now the West Coast. In 2016, she completed a Lila Acheson Wallace American Playwrights Fellowship at The Juilliard School. Her plays, which have been produced across the US and Canada, include Airness, Everything is Wonderful, Tiny Houses, Ladyish, and Devour. As a writer, Chelsea is extremely interested in humans as small-group primates, and what happens when the rules and value systems of our chosen groups cease to serve us. She reads a lot of books, watches a lot of documentaries, and listens to a lot of podcasts. Chelsea is an enthusiastic member of The Writers Guild of America, The Dramatists Guild, and The Kilroys. Current commissions: Chicago Shakespeare Theatre, Geffen Playhouse, Cleveland Play House, Signature Theatre DC, as well as musical projects with Broadway producers Blue Spruce, Jeffrey Richards, and STK Productions.

Peliczowski (Fully Committed), Bottom (A Midsummer Night’s Dream), Gaston (Beauty and the Beast), Ty Saybrook (Revolutions by Richard Alfieri, a world premiere), and Lennie in the Barter’s national tour of Of Mice and Men. Additional theater credits include The Book Club Play, by Karen Zacarias, at both Cincinnati Playhouse in the Park and The Public Theatre of Maine; Jacob Marley’s Christmas Carol and The Taming of the Shrew at Duke City Repertory Theatre; and Bumbershoot with In/ Visible Theatre at The New York International Fringe Festival. Since 2013, Mike has been performing his solo show, Groundwork, co-written by playwright Derek Davidson. Television credits include Breaking Bad, Narcos: Mexico, Euphoria, Modern Family, How To Get Away With Murder, Brooklyn Nine-Nine, Fuller House (recurring), The Middle, The Muppets, Henry Danger (recurring), and Danger Force (recurring). Film credits include Velvet Buzzsaw, Shot Caller, Blonde, and Lifetime’s New York Prison Break. Mike lives in Highland Park with his wife, Kate Cook, and two adorable daughters. He is a proud member of SAG/AFTRA and Actors Equity. R AC H E L W I EG A R DT- EG E L

Mike Ostroski is an actor, writer and director. Mike spent twelve years as a resident company member of the Barter Theatre in Abington, VA, where his favorite roles included Jamie Wellerstein (The Last Five Years), Sam

Rachel is the Manager of New Play Development at the Geffen Playhouse, where she supports the artistic staff in season planning and fostering new work. She spearheads The Writers’ Room annual program, in which six Los Angeles-based playwrights develop new plays with

Phyllis is an Artistic Associate and the Casting Director for the Geffen Playhouse. Recent casting includes Mysterious Circumstances, Black Super Hero Magic Mama, Skeleton Crew, The Legend of Georgia McBride, Guards at the Taj and American Buffalo at the Geffen, and Put Your House in Order at La Jolla Playhouse. She has received 5 Artios nominations: Significant Other, Actually, Barbecue, Barcelona, The Country House. Before joining the Geffen, she was the Casting Director for Steppenwolf Theater Company in Chicago where her favorites include Frank Galati’s adaptation of The Grapes of Wrath (also La Jolla Playhouse, National Theatre in London and Broadway, where it received the Tony Award for Best Play), the original production of Steve Martin’s Picasso at the Lapin Agile (and subsequent productions including Westwood Playhouse and Briar Street Theater in Chicago), Austin Pendleton’s Orson’s Shadow, and

Men, Fargo, The Good Wife, and

Broadway transfers include One

Succession. He helmed the pilot

Flew Over the Cuckoo’s Nest

episode for Hulu’s The Great

and The Song of Jacob Zulu. She

is a member of the Casting Soci-

and is currently producing and

Matt Shakman is Artistic Director of the Geffen Playhouse.

In this role, he is responsible

for identifying, developing, and

rector of Geffen Playhouse. In

of classic plays with a focus

this role, he is responsible for

on exceptional storytelling and

stances for the Geffen in 2019

and leading its mission to in-

and prior to joining as Artistic

of the highest caliber. Prior to

ductions at the Playhouse: the

producer and director in theater,

film and television. His theater

the artistic director of the Black

and David Mamet’s A Life in

which was named “one of a doz-

the Theatre (both at Syracuse

you need to know” by American

include The Surface (starring

magazine. Matt is a director and

Sunny in Philadelphia and has

directed episodes of Game of

and The Mesmerist (starring

Playhouse. In this role, she has

torial debut was an episode of

accounting functions of the

theater, including operating and

studied at the National Theatre

capital budgets. In addition, she

supports all IT and HR activities.

cial Officer in 2015 after serving

FILMING NOTICE This live-streamed program © 2020. All rights reserved. This performance is authorized for private in-home use only. By viewing the live streamed program you agree not to authorize or permit the live-stream to be downloaded, copied, distributed, broadcast, telecast or otherwise exploited, in whole or in part, in any media now known of hereafter developed. WARNING: Federal law provides severe civil and criminal penalties for the unauthorized reproduction, distribution or exhibition of copyrighted motion pictures, videotapes or videodiscs. Criminal copyright infringement is investigated by the FBI and may constitute a felony with a maximum penalty of up to five years in prison and/or a $250,000 fine.

ANNUAL DONORS Geffen Playhouse recognizes the following individuals and organizations for their generous support of our Annual Fund and Backstage at the Geffen. Donors are listed at the Associate level and higher for gifts made between January 1, 2019 and November 5, 2020. In appreciation, donors enjoy a host of special benefits including house seats, complimentary drinks, receptions, and much more. For more information, please call Christine Drew Benjamin at 310.208.6500 ext. 195. ANGELS