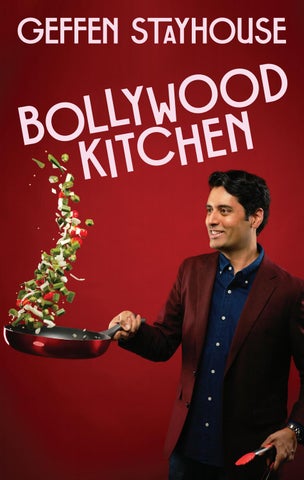 Welcome to Sri Rao’s Bollywood Kitchen! This show marks our fifth virtual production since the spring of 2020. It has been a joy and an honor to bring theatrical experiences into audiences’ homes during this time of separation. Every Geffen Stayhouse show has evolved in its own way. Bollywood Kitchen first came to my attention a couple years ago—it was then being created as a solo stage play inspired by Sri’s cookbook of the same title. While I loved the personal nature of the show and the idea of immersing Geffen audiences in Indian cooking and Bollywood films, the specific requirements of the in-person version were not viable for us at that time. When we made an unexpected pivot to virtual producing, we were eager to revisit this idea—adding the twist of audiences cooking at home. It was a rare case of the online medium making a theatrical piece more feasible. 2 B O L LY WO O D K I TC H E N

We are thrilled that Sri has embraced the challenge of adapting the show for a virtual life. Director Arpita Mukherjee and the New York City-based Hypokrit Theatre Company have been intimately involved in developing the piece, and we’re delighted to have them and the talented design team as partners in this pandemic-era endeavor. Interactivity comes in different forms with each Stayhouse show. In this case, as you listen to Sri tell the story of his family, you play the role of chef. The smell of myriad spices, the sizzling of a pan, and the flavors of Sri’s family recipes combine to create a sensory experience that accompanies the narrative one. Thank you for coming on this virtual journey with us—let’s get cooking! Matt Shakman Artistic Director

PRODUCED IN ASSOCIATION WITH

75 minutes There will be no intermission. PLEASE NOTE

Sri Rao is a filmmaker based in New York City. He stands uniquely positioned at the intersection of Hollywood &amp; Bollywood, as one of the few American-born screenwriters to have worked in the mainstream Indian film industry. He is the creator and showrunner of the upcoming Netflix series The Actress, and is developing several other series for Netflix and HBO Max. His production company is focused on creating content by and about South Asian Americans. In his book Bollywood Kitchen (Houghton Mifflin Harcourt), Sri combines his passion for Indian food and films by pairing Bollywood musicals with home-cooked recipes. sriandcompany.com

For My Father by Aya Aziz (Next Door at NYTW), Elements of Change by Divya Mangwani (Rattlestick Playwrights Theater, UNICEF), American Hunger by Nikhil Mahapatra (Dramatists Guild Foundation), One Way by Ben Bonnema and Christopher Staskel (NAMT), Maya by Cheeyang Ng and Eric Sorrels (Live &amp; In Color), Citizen Scientist by CQ (Barrington Stage Company Playworks Weekend), and Reclaiming Our Time: A Concert (MTF at Joe’s Pub). Arpita has developed work at WP Theater, the Public Theater, The New Group and MaYi Theatre amongst others. She is a 2020-2021 Clubbed Thumb Directing Fellow, 2019 SDC Denham Fellow, a 2018-2020 Women&#39;s Project Lab Member and a 2018 Eugene O’Neill National Directing Fellow. She is an alumna of the Lincoln Center Directors Lab. Arpita was selected as a 2019 Mabou Mines Resident Artist, a 2019-2020 LMCC Governors Island Artist-in-Residence, and the 2019 Iowa State University Artist-in-Residence. Arpita is currently the book writer for Monsoon Wedding musical and is developing several film and TV projects in India and USA. N E I L PAT E L

Past Geffen Playhouse credits include The Lion; By the Way, Meet Vera Stark; The Break of Noon; and Dinner with Friends. A R J U N B H AS I N

Arjun Bhasin was born in India and studied film and design at New York University&#39;s Tisch School of Arts. Shuttling effortlessly between Hollywood and Bollywood, crisscrossing sensibilities and ideologies, Arjun brings a unique vision to his film, television, and stage work. Arjun’s film credits include: A Beautiful Day in the Neighborhood, Can You Ever Forgive Me?, Life of Pi, Love is Strange, Begin Again, Monsoon Wedding, Dil Chahta Hai, and Gully Boy. Arjun lives in New York City. A M I T H C H A N D R AS H A K E R

Hypokrit Theatre Company’s mission is to disrupt the pedagogy of American theater, in order to create a more equitable and relevant theater. Based in New York City, Hypokrit exclusively develops work by artists of color and is led and supported by minority communities, who across ethnicities, genders, and sexualities are united in their commitment to elevate multicultural talent and stories.

Until Dark (2013), and Joshua Harmon’s Bad Jews (2015). Matt founded and was the artistic director of the Black Dahlia Theatre in Los Angeles, which was named “one of a dozen young American companies you need to know” by American Theatre magazine and “Best Small Theatre” by Los Angeles magazine. Matt is a director and producer for FX’s It’s Always Sunny in Philadelphia and has directed episodes of Game of Thrones (DGA nomination), Mad Men, Fargo, The Good Wife, and Succession. He helmed the pilot episode for Hulu’s The Great (Emmy nomination) starring Elle Fanning and Nicholas Hoult and is currently producing and directing all episodes of WandaVision, a Marvel Studios event series for Disney+ starring Paul Bettany and Elizabeth Olsen.

Matt Shakman is Artistic Director of the Geffen Playhouse. In this role, he is responsible for identifying, developing, and staging new work and revivals of classic plays with a focus on exceptional storytelling and audience experience. Matt last helmed Mysterious Circumstances for the Geffen in 2019 and prior to joining as Artistic Director in 2017, Shakman directed three acclaimed productions at the Playhouse: the West Coast premiere of David Lindsay-Abaire’s Good People (2012), the world premiere of Jeffrey Hatcher’s new adaptation of Wait

Gil Cates, Jr. is Executive Director of Geffen Playhouse. In this role, he is responsible for managing the Geffen’s day-to-day operations; developing new, ongoing theater partnerships and leading its mission to inform, entertain and inspire diverse audiences with live theater of the highest caliber. Prior to being named Executive Director in 2015, Cates served as Geffen Playhouse Board Vice Chairman since 2012 and served as a producer and director in theater, film and television. His theater credits include the award-winning Names (Matrix Theatre Company) and Three Sisters and David Mamet’s A Life in the Theatre (both at Syracuse Stage). Cates’ film credits include The Surface (starring Sean Astin and Geffen Playhouse alumnus Chris Mulkey), Jobs (starring Ashton Kutcher, Josh

Bollywood Kitchen by Sri Rao is made possible in part with public funds from Creative Engagement, supported by the New York City Department of Cultural Affairs in partnership with the City Council and administered by LMCC.

ANNUAL DONORS Geffen Playhouse recognizes the following individuals and organizations for their generous support of our Annual Fund and Backstage at the Geffen. Donors are listed at the Associate level and higher for gifts made between January 1, 2019 and January 11, 2021. In appreciation, donors enjoy a host of special benefits including house seats, complimentary drinks, receptions, and much more. For more information, please call Christine Drew Benjamin at 310.208.6500 ext. 195. ANGELS $100,000+