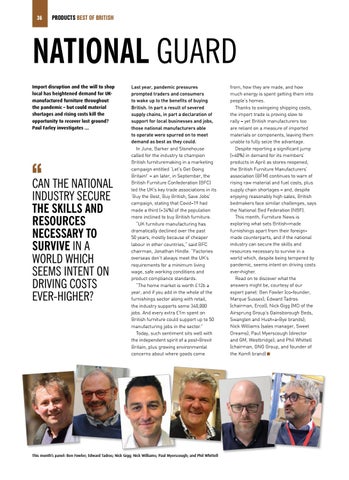 NATIONAL GUARD Import disruption and the will to shop local has heightened demand for UKmanufactured furniture throughout the pandemic – but could material shortages and rising costs kill the opportunity to recover lost ground? Paul Farley investigates …

CAN THE NATIONAL INDUSTRY SECURE THE SKILLS AND RESOURCES NECESSARY TO SURVIVE IN A WORLD WHICH SEEMS INTENT ON DRIVING COSTS EVER-HIGHER?

Last year, pandemic pressures prompted traders and consumers to wake up to the benefits of buying British. In part a result of severed supply chains, in part a declaration of support for local businesses and jobs, those national manufacturers able to operate were spurred on to meet demand as best as they could. In June, Barker and Stonehouse called for the industry to champion British furnituremaking in a marketing campaign entitled ‘Let’s Get Going Britain!’ – an later, in September, the British Furniture Confederation (BFC) led the UK’s key trade associations in its ‘Buy the Best, Buy British, Save Jobs’ campaign, stating that Covid-19 had made a third (+34%) of the population more inclined to buy British furniture. “UK furniture manufacturing has dramatically declined over the past 50 years, mostly because of cheaper labour in other countries,” said BFC chairman, Jonathan Hindle. “Factories overseas don’t always meet the UK’s requirements for a minimum living wage, safe working conditions and product compliance standards. “The home market is worth £12b a year, and if you add in the whole of the furnishings sector along with retail, the industry supports some 340,000 jobs. And every extra £1m spent on British furniture could support up to 50 manufacturing jobs in the sector.” Today, such sentiment sits well with the independent spirit of a post-Brexit Britain, plus growing environmental concerns about where goods come

from, how they are made, and how much energy is spent getting them into people’s homes. Thanks to swingeing shipping costs, the import trade is proving slow to rally – yet British manufacturers too are reliant on a measure of imported materials or components, leaving them unable to fully seize the advantage. Despite reporting a significant jump (+40%) in demand for its members’ products in April as stores reopened, the British Furniture Manufacturers’ association (BFM) continues to warn of rising raw material and fuel costs, plus supply chain shortages – and, despite enjoying reasonably high sales, British bedmakers face similar challenges, says the National Bed Federation (NBF). This month, Furniture News is exploring what sets British-made furnishings apart from their foreignmade counterparts, and if the national industry can secure the skills and resources necessary to survive in a world which, despite being tempered by pandemic, seems intent on driving costs ever-higher. Read on to discover what the answers might be, courtesy of our expert panel: Ben Fowler (co-founder, Marque Sussex); Edward Tadros (chairman, Ercol); Nick Gigg (MD of the Airsprung Group’s Gainsborough Beds, Swanglen and Hush-a-Bye brands); Nick Williams (sales manager, Sweet Dreams); Paul Myerscough (director and GM, Westbridge); and Phil Whittell (chairman, GNG Group, and founder of the Komfi brand)

With the pandemic prompting many of us to re-evaluate the worth of British-made goods, June’s issue looks at how British manufacturers are taking the opportunity to seize market share. In this month’s special feature, we ask a host of British brand champions to tell us what sets British-made furniture apart, and if consumers are willing to pay more for it. On that theme, we discover how retailers and suppliers are handling the seemingly inexorable price rises, and share expert views on how best to negotiate the challenge. With demand for new product – British-made or imported – high, we also look at the buying opportunities the approaching trade shows present, previewing The Summer Furniture Show, and finding out why Manchester Furniture Show is relocating to Harrogate this summer. 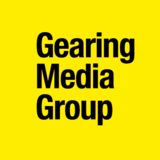 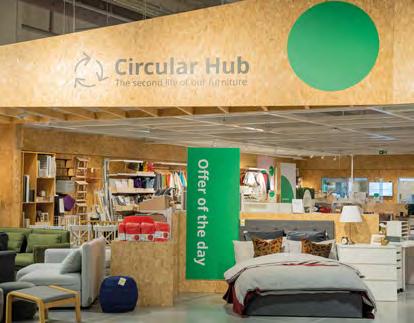 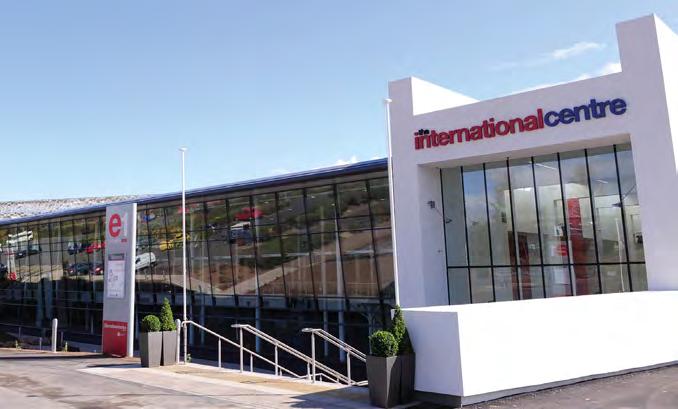