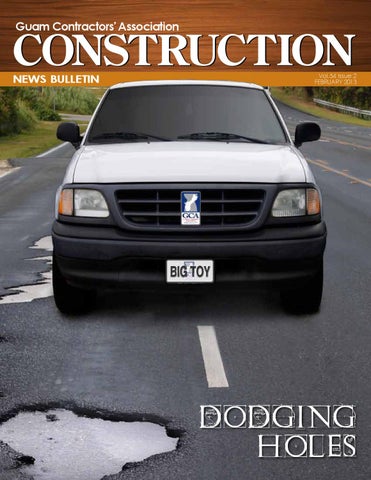 A Fun-Filled Day for the Entire Family.

Gut Busters Hey neighbor, Give me a sign that you’re making your overgrown garden I was just more attractive. about to.

NOT WHAT I HAD IN MIND.

THEEDITORIALS Guam Contractor’s Association (GCA) in conjunction with AdzTech and Public Relations, Inc. publishes the Construction News Bulletin (CNB) monthly. Reproduction of materials appearing in this publication is strictly forbidden without written permission by GCA. While we always strive for accuracy, we will from time to time overlook mistakes. In order to help us improve the quality and accuracy of this publication, we ask that you take the time to look at the information provided and notify GCA of any corrections as needed. Opinions and editorial content of this publication may not necessarily be those of the publisher, staff, GCA members, GCA Board of Directors and advertisers. For more information about advertising in the GCA Construction News Bulletin contact the advertising department at (671) 477-1239/2239 or email at adztech@teleguam.net. Distributed to GCA members or can be obtained by stopping by the Guam Contractors’ Association office located at 718 N. Marine Corps Drive, Suite 203, East West Business Center, Upper Tumon, Guam. To find out more about how you can become a GCA member contact Guam Contractors’ Association at Tel: (671)647-4840/41 Fax: (671) 647-4866 or Email: gca@teleguam.net. www.guamcontractors.org Postmaster. Send address changes to Guam Contractors’ Association, located at 718 N. Marine Drive Corps Suite 203, East West Business Center, Upper Tumon, Guam.

Guest speaker at the January meeting for the SAME Guam

Post was Angel Marquez, Acting Chief Engineer for the Guam Environmental Protection Agency. As requirements change throughout the years, as a planner, it is important to understand what is required in order to be in compliance with our island’s environmental laws. In his presentation, Mr. Marquez discussed the process and the procedures required in order to obtain the appropriate EPA approvals and permits.

This presentation can be viewed on www.youtube.com or go to epa.guam.gov for more information.