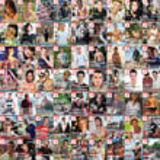 The biggest gay publication in the Netherlands, which, since 1992, comes out every once a month, and is Amsterdam's gay magazine.

Gay News is entirely bilingual (in both English and Dutch) and is distributed in The Netherlands & Belgium. It's Holland's only independent gay publication. Gay News is unique for it's mixture of serious to light editorial content, is informative, varied, and home to some of the well-known dutch gay authors and editors.