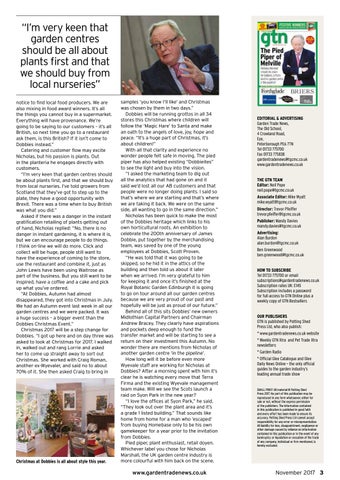 “I’m very keen that garden centres should be all about plants first and that we should buy from local nurseries” notice to find local food producers. We are also mixing in food award winners. It’s all the things you cannot buy in a supermarket. Everything will have provenance. We’re going to be saying to our customers – it’s all British, so next time you go to a restaurant ask them, is this British? If it isn’t come to Dobbies instead.” Catering and customer flow may excite Nicholas, but his passion is plants. Out in the planteria he engages directly with customers. “I’m very keen that garden centres should be about plants first, and that we should buy from local nurseries. I’ve told growers from Scotland that they’ve got to step up to the plate, they have a good opportunity with Brexit. There was a time when to buy British was what you did.” Asked if there was a danger in the instant gratification retailing of plants getting out of hand, Nicholas replied: “No, there is no danger in instant gardening, it is where it is, but we can encourage people to do things. I think on-line we will do more. Click and collect will be huge, people still want to have the experience of coming to the store, use the restaurant and combine it, just as John Lewis have been using Waitrose as part of the business. But you still want to be inspired, have a coffee and a cake and pick up what you’ve ordered. “At Dobbies, Autumn had almost disappeared, they got into Christmas in July. We had an Autumn event last week in all our garden centres and we were packed. It was a huge success – a bigger event than the Dobbies Christmas Event.” Christmas 2017 will be a step change for Dobbies. “I got up here and on day three was asked to look at Christmas for 2017. I walked in, walked out and rang Lorrie and asked her to come up straight away to sort out Christmas. She worked with Craig Roman, another ex-Wyevaler, and said no to about 70% of it. She then asked Craig to bring in

Christmas at Dobbies is all about style this year.

samples ‘you know I’ll like’ and Christmas was chosen by them in two days.” Dobbies will be running grottos in all 34 stores this Christmas where children will follow the ‘Magic Hare’ to Santa and make an oath to the angels of love, joy, hope and peace. “It’s a huge part of Christmas, it’s about children!” With all that clarity and experience no wonder people felt safe in moving. The pied piper has also helped existing “Dobbieites” to see the light and buy into the vision. “I asked the marketing team to dig out all the analytics that had gone on and it said we’d lost all our AB customers and that people were no longer doing plants. I said so that’s where we are starting and that’s where we are taking it back. We were on the same side, all wanting to go in the same direction.” Nicholas has been quick to make the most of the Dobbies heritage which links to his own horticultural roots. An exhibition to celebrate the 200th anniversary of James Dobbie, put together by the merchandising team, was saved by one of the young employees at Dobbies, Scott Proven. “He was told that it was going to be skipped, so he hid it in the attics of the building and then told us about it later when we arrived. I’m very grateful to him for keeping it and once it’s finished at the Royal Botanic Garden Edinburgh it is going to go on tour around all our garden centres because we are very proud of our past and hopefully will be just as proud of our future.” Behind all of this sits Dobbies’ new owners Midlothian Capital Partners and Chairman Andrew Bracey. They clearly have aspirations and pockets deep enough to fund the transfer market and will be starting to see a return on their investment this Autumn. No wonder there are mentions from Nicholas of another garden centre ‘in the pipeline’. How long will it be before even more Wyevale staff are working for Nicholas at Dobbies? After a morning spent with him it’s clear he is watching every move that Terra Firma and the existing Wyevale management team make. Will we see the Scots launch a raid on Syon Park in the new year? “I love the offices at Syon Park,” he said. “They look out over the plant area and it’s a grade 1 listed building.” That sounds like home from home for a man who ‘escaped’ from buying Homebase only to be his own gamekeeper for a year prior to the invitation from Dobbies. Pied piper, plant enthusiast, retail doyen. Whichever label you chose for Nicholas Marshall, the UK garden centre industry is more colourful with him back on the scene.

EDITORIAL & ADVERTISING Garden Trade News, The Old School, 4 Crowland Road, Eye, Peterborough PE6 7TN Tel 01733 775700 Fax 01733 775838 gardentradenews@tgcmc.co.uk www.gardentradenews.co.uk THE GTN TEAM Editor: Neil Pope neil.pope@tgcmc.co.uk Associate Editor: Mike Wyatt mike.wyatt@tgcmc.co.uk Director: Trevor Pfeiffer trevor.pfeiffer@tgcmc.co.uk Publisher: Mandy Davies mandy.davies@tgcmc.co.uk Advertising: Alan Burdon alan.burdon@tgcmc.co.uk Ben Greenwood ben.greenwood@tgcmc.co.uk HOW TO SUBSCRIBE Tel 01733 775700 or email subscriptions@gardentradenews.co.uk Subscription rates UK: £145 Subscription includes a password for full access to GTN Online plus a weekly copy of GTN Bestsellers OUR PUBLISHERS GTN is published by Potting Shed Press Ltd, who also publish: * www.gardentradenews.co.uk website * Weekly GTN Xtra and Pet Trade Xtra newsletters * Garden Radio * Official Glee Catalogue and Glee Daily News Online – the only official guides to the garden industry’s leading annual trade show SMALL PRINT All material © Potting Shed Press 2017. No part of this publication may be reproduced in any form whatsoever, either for sale or not, without the express permission of the publishers. The information contained in this publication is published in good faith and every effort has been made to ensure its accuracy. Potting Shed Press Ltd cannot accept responsibility for any error or misrepresentation. All liability for loss, disappointment, negligence or other damage caused by reliance on information contained in this publication or in the event of any bankruptcy or liquidation or cessation of the trade of any company, individual or firm mentioned, is hereby excluded.