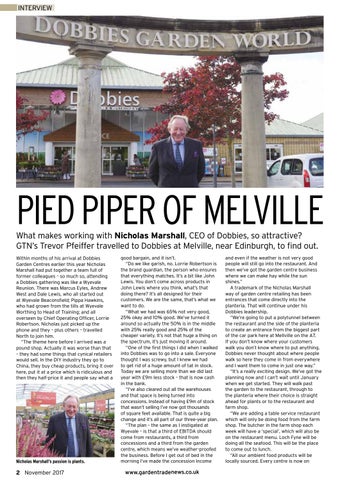 PIED PIPER OF MELVILLE What makes working with Nicholas Marshall, CEO of Dobbies, so attractive? GTN’s Trevor Pfeiffer travelled to Dobbies at Melville, near Edinburgh, to find out. Within months of his arrival at Dobbies Garden Centres earlier this year Nicholas Marshall had put together a team full of former colleagues – so much so, attending a Dobbies gathering was like a Wyevale Reunion. There was Marcus Eyles, Andrew West and Dale Lewis, who all started out at Wyevale Beaconsfield; Pippa Hawkins, who had grown from the tills at Wyevale Worthing to Head of Training; and all overseen by Chief Operating Officer, Lorrie Robertson. Nicholas just picked up the phone and they – plus others – travelled North to join him. “The theme here before I arrived was a pound shop. Actually it was worse than that – they had some things that cynical retailers would sell. In the DIY industry they go to China, they buy cheap products, bring it over here, put it at a price which is ridiculous and then they half-price it and people say what a

good bargain, and it isn’t. “Do we like garish, no. Lorrie Robertson is the brand guardian, the person who ensures that everything matches. It’s a bit like John Lewis. You don’t come across products in John Lewis where you think, what’s that doing there? It’s all designed for their customers. We are the same, that’s what we want to do. “What we had was 65% not very good, 25% okay and 10% good. We’ve turned it around so actually the 50% is in the middle with 25% really good and 25% of the cheaper variety. It’s not that huge a thing on the spectrum, it’s just moving it around. “One of the first things I did when I walked into Dobbies was to go into a sale. Everyone thought I was screwy, but I knew we had to get rid of a huge amount of tat in stock. Today we are selling more than we did last year with £9m less stock – that is now cash in the bank. “I’ve also cleared out all the warehouses and that space is being turned into concessions. Instead of having £9m of stock that wasn’t selling I’ve now got thousands of square feet available. That is quite a big change and it’s all part of our three-year plan. “The plan – the same as I instigated at Wyevale – is that a third of EBITDA should come from restaurants, a third from concessions and a third from the garden centre, which means we’ve weather-proofed the business. Before I get out of bed in the morning I’ve made the concession income

and even if the weather is not very good people will still go into the restaurant. And then we’ve got the garden centre business where we can make hay while the sun shines.” A trademark of the Nicholas Marshall way of garden centre retailing has been entrances that come directly into the planteria. That will continue under his Dobbies leadership. “We’re going to put a polytunnel between the restaurant and the side of the planteria to create an entrance from the biggest part of the car park here at Mellville on the A7. If you don’t know where your customers walk you don’t know where to put anything. Dobbies never thought about where people walk so here they come in from everywhere and I want them to come in just one way.” “It’s a really exciting design. We’ve got the planning now and I can’t wait until January when we get started. They will walk past the garden to the restaurant, through to the planteria where their choice is straight ahead for plants or to the restaurant and farm shop. “We are adding a table service restaurant which will only be doing food from the farm shop. The butcher in the farm shop each week will have a ‘special’, which will also be on the restaurant menu. Loch Fyne will be doing all the seafood. This will be the place to come out to lunch. “All our ambient food products will be locally sourced. Every centre is now on