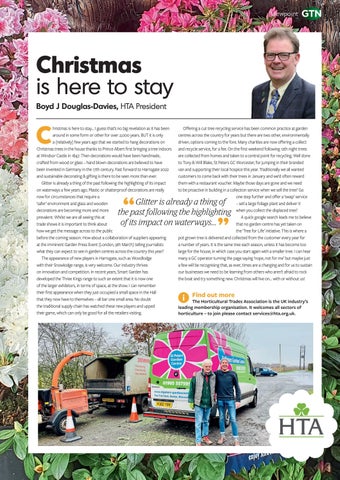 hristmas is here to stay… I guess that’s no big revelation as it has been around in some form or other for over 2,000 years. BUT it is only a (relatively) few years ago that we started to hang decorations on Christmas trees in the house thanks to Prince Albert ﬁrst bringing a tree indoors at Windsor Castle in 1847. Then decorations would have been handmade, crafted from wood or glass – hand blown decorations are believed to have been invented in Germany in the 17th century. Fast forward to Harrogate 2022 and sustainable decorating &amp; gifting is there to be seen more than ever. Glitter is already a thing of the past following the highlighting of its impact on waterways a few years ago. Plastic or shatterproof decorations are really now for circumstances that require a ‘safer’ environment and glass and wooden decorations are becoming more and more prevalent. Whilst we are all seeing this at trade shows it is important to think about how we get the message across to the public before the coming season. How about a collaboration of suppliers appearing at the imminent Garden Press Event (London, 9th March) telling journalists what they can expect to see in garden centres across the country this year? The appearance of new players in Harrogate, such as Woodlodge with their Snowlodge range, is very welcome. Our industry thrives on innovation and competition. In recent years, Smart Garden has developed the Three Kings range to such an extent that it is now one of the larger exhibitors, in terms of space, at the show. I can remember their ﬁrst appearance when they just occupied a small space in the Hall that they now have to themselves – all bar one small area. No doubt the traditional supply chain has watched these new players and upped their game, which can only be good for all the retailers visiting.

Oﬀering a cut tree recycling service has been common practice at garden centres across the country for years but there are two other, environmentally driven, options coming to the fore. Many charities are now oﬀering a collect and recycle service, for a fee. On the ﬁrst weekend following 12th night trees are collected from homes and taken to a central point for recycling. Well done to Tony &amp; Will Blake, St Peters GC Worcester, for jumping in their branded van and supporting their local hospice this year. Traditionally we all wanted customers to come back with their trees in January and we’d often reward them with a restaurant voucher. Maybe those days are gone and we need to be proactive in building in a collection service when we sell the tree? Go one step further and oﬀer a ‘swap’ service – sell a large foliage plant and deliver it when you collect the displaced tree? A quick google search leads me to believe that no garden centre has yet taken on the ‘Tree for Life’ initiative. This is where a pot grown tree is delivered and collected from the customer every year for a number of years. It is the same tree each season, unless it has become too large for the house, in which case you start again with a smaller tree. I can hear many a GC operator turning the page saying ‘nope, not for me’ but maybe just a few will be recognising that, as ever, times are a changing and for us to sustain our businesses we need to be learning from others who aren’t afraid to rock the boat and try something new. Christmas will live on… with or without us!

The Horticultural Trades Association is the UK industry’s leading membership organisation. It welcomes all sectors of horticulture – to join please contact services@hta.org.uk.