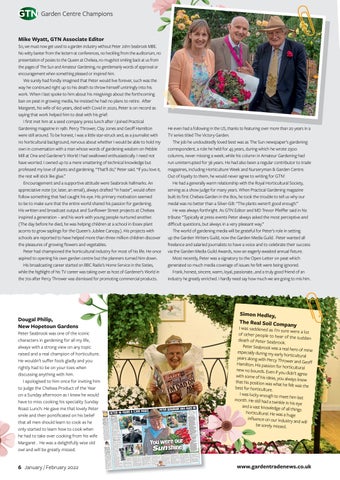 Mike Wyatt, GTN Associate Editor So, we must now get used to a garden industry without Peter John Seabrook MBE. No witty banter from the lectern at conferences, no heckling from the auditorium, no presentation of posies to the Queen at Chelsea, no mugshot smiling back at us from the pages of The Sun and Amateur Gardening, no gentlemanly words of approval or encouragement when something pleased or inspired him. We surely had fondly imagined that Peter would live forever, such was the way he continued right up to his death to throw himself untiringly into his work. When I last spoke to him about his misgivings about the forthcoming ban on peat in growing media, he insisted he had no plans to retire. After Margaret, his wife of 60 years, died with Covid in 2020, Peter is on record as saying that work helped him to deal with his grief. I ﬁrst met him at a seed company press lunch after I joined Practical Gardening magazine in 1981. Percy Thrower, Clay Jones and Geoﬀ Hamilton were still around. To be honest, I was a little star-struck and, as a journalist with no horticultural background, nervous about whether I would be able to hold my own in conversation with a man whose words of gardening wisdom on Pebble Mill at One and Gardener’s World I had swallowed enthusiastically. I need not have worried. I owned up to a mere smattering of technical knowledge but professed my love of plants and gardening. “That’ll do,” Peter said. “If you love it, the rest will stick like glue.” Encouragement and a supportive attitude were Seabrook hallmarks. An appreciative note (or, later, an email), always drafted “in haste”, would often follow something that had caught his eye. His primary motivation seemed to be to make sure that the entire world shared his passion for gardening. His written and broadcast output and Sunﬂower Street projects at Chelsea inspired a generation – and his work with young people nurtured another. (The day before he died, he was helping children at a school in Essex plant acorns to grow saplings for the Queen&#39;s Jubilee Canopy.). His projects with schools are reported to have helped more than three million children discover the pleasures of growing ﬂowers and vegetables. Peter had championed the horticultural industry for most of his life. He once aspired to opening his own garden centre but the planners turned him down. His broadcasting career started on BBC Radio’s Home Service in the Sixties, while the highlight of his TV career was taking over as host of Gardener’s World in the 70s after Percy Thrower was dismissed for promoting commercial products.

He even had a following in the US, thanks to featuring over more than 20 years in a TV series titled The Victory Garden. The job he undoubtedly loved best was as The Sun newspaper’s gardening correspondent, a role he held for 45 years, during which he wrote 2300 columns, never missing a week, while his column in Amateur Gardening had run uninterrupted for 36 years. He had also been a regular contributor to trade magazines, including Horticulture Week and Nurseryman &amp; Garden Centre. Out of loyalty to them, he would never agree to writing for GTN! He had a generally warm relationship with the Royal Horticultural Society, serving as a show judge for many years. When Practical Gardening magazine built its ﬁrst Chelsea Garden in the 80s, he took the trouble to tell us why our medal was no better than a Silver-Gilt: “The plants weren’t good enough.” He was always forthright. As GTN Editor and MD Trevor Pfeiﬀer said in his tribute: “Typically at press events Peter always asked the most perceptive and diﬃcult questions, but always in a very pleasant way.” The world of gardening media will be grateful for Peter’s role in setting up the Garden Writers Guild, now the Garden Media Guild. Peter wanted all freelance and salaried journalists to have a voice and to celebrate their success via the Garden Media Guild Awards, now an eagerly-awaited annual ﬁxture. Most recently, Peter was a signatory to the Open Letter on peat which generated so much media coverage of issues he felt were being ignored. Frank, honest, sincere, warm, loyal, passionate…and a truly good friend of an industry he greatly enriched. I hardly need say how much we are going to mis him.

Dougal Philip, New Hopetoun Gardens Peter Seabrook was one of the iconic characters in gardening for all my life, always with a strong view on any topic raised and a real champion of horticulture. He wouldn’t suﬀer fools gladly and you rightly had to be on your toes when discussing anything with him. I apologised to him once for inviting him to judge the Chelsea Product of the Year on a Sunday afternoon as I knew he would have to miss cooking his speciality Sunday Roast Lunch. He gave me that lovely Peter smile and then pontiﬁcated on his belief that all men should learn to cook as he only started to learn how to cook when he had to take over cooking from his wife Margaret . He was a delightfully wise old owl and will be greatly missed.

of one of THE discovery gold “first England’s a make could coins” £400,000. metal detectorist King The near-perfect was III token Henry 1257 with struck around Africa. gold from North the coins Only eight of inch in — just under an with diameter — exist almost all in museums. detectThe anonymous the find orist, who madeDevon last in Hemyock in its discovered only year, photo he rarity when a was seen posted online by Spink auctioneers. ecologist The man, an outon a first detecting said: “It ing in ten years, find it.” was humbling to of the Some 52,000 and coins were minted about valued at 20 pence,it was £60 today, butits weight worth less than all in gold and virtually were melted down. by It will be auctioned London Spink in central on January 23.

PETER SEABROOK, The Sun’s legendary expert, gardening never forgot the moment he discovered the sheer joy of growing a plant.

And 80 years in The his Saturday column began writing Sun — which he year, 1977 — in Silver Jubilee that pasJOY . . . in he was still sharing and vegetables. CHELSEAQueen and sion for plants generations six 2010 with Thanks to Peter, more than Kate Kabengle, of people, including schoolchildren, million three gardens and learned to love gardening. writing for When he started daily newspapermedia Britain’s biggest a worldwide Peter was already shows on the star, with gardeningTV. BBC and American wrote more than In 45 years he The Sun, and never 2,300 columns forweek. missed a single of a heart attack on When he died he had been making Friday, aged 86,The Sun’s biggest-ever plans to build year’s Chelsea Flower exhibit at this the Queen’s Platinum Show to mark Jubilee. he presented with Her Majesty, whoat Chelsea, was one year a posy every along with Beatle of his biggest fans,and acting legend George Harrison — whose garden he Barbara Windsor looked after.

Menace’s the DENNIS side-kick sausage-loving vegan. Gnasher has gone carThe comic canine turns nivore unwittingly food in to plant-based Annual. the 2022 Beano bangers He steals some they and, after learningthinks: vegan, were I like? “What else might at cats.” I’ll draw the line rights Yesterday animal said: campaigners Peta is “The vegan revolution in full swing.” an Gnasher — officially wire-haired Abyssinian been a tripe hound — has since he fan favourite in 1968. first appeared He is the 84-year-old to comic’s latest character be given a make-over. and Bash St Kids Fatty called to Spotty are now Fred and Scotty. said: Beano The to find a “Gnasher is yet like sausage he doesn’tto try but will continue one he each and every comes across.”

L . . . with FRUITFU Windsor Barbara Scott and hubby at Chelsea

TOP OF THE CROPS . . . Peter with tulips at Hyde Hall

Picture by his friend ARTHUR EDWARDS

Y u were our Yo Sun shine

and big FRIENDS, colleagues world names from the gardening to Peter. last night paid tribute took over Alan Titchmarsh, who Gardeners’ show from him on BBC2 was the most World, said: “PeterHe was a good generous of men. colleague in the friend and a great together at years that we worked Show. the Chelsea Floweryear I made a “I remember the as well as garden at the showprogramme. presenting the TV from the “I was hauled away finish off and to garden I was trying exhibit of an of front in stood which I’d had strange plants about on with the no time to swot up his notebook grower. Peter openedresearch and reeled off all his use. to me for material man he was. “That’s the sort of We will miss him hugely.” writer Bob Flowerdew, gardening on Radio 4’s and long-time guest Time, said: Gardeners’ Question and “Peter was so knowledgeable which his delivery so measured, always added gravitas. glove, “He was like a velvet resolve.” gentle but with a steely worked with Steve Bradley, who for 20 Peter on his Sun column respected years, said: “He was from across the whole industry, plant to a lady with a house complex somebody with a vast in producing geraniums California. ever come “Nobody else has was his life’s Horticulture close. he was good work and, by God, at it.” Steve’s wife and colleague Val added: “With those flower and hats distinctive him ties, people sought out. He was generous with his time. “Where he found his no I’ve from energy

NING FAREWELL TO A GARDE

I was saddened as I’m sure were a lot of other people to he ar of the sudden death of Peter Seabro ok. Peter Seabrook was a rea l hero of mine especially during my ear ly horticultural years along with Percy Thrower and Geoﬀ Hamilton. His passion for horticultural new no bounds. Even if you didn’t agree with some of his ideas, you always knew that his position was wh at he felt was the best for horticulture. I was lucky enough to me et him last month. He still had a twi nkle in his eye and a vast knowledge of all things horticultural. He was a huge inﬂuence on our indust ry and will be sorely missed.