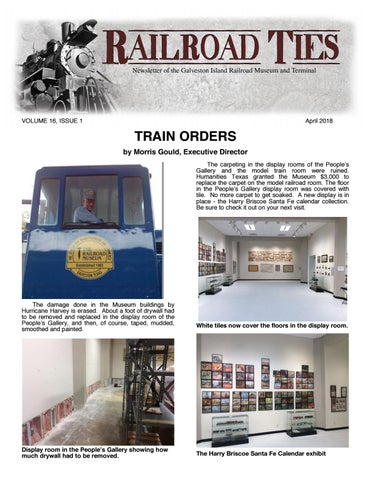 TRAIN ORDERS by Morris Gould, Executive Director The carpeting in the display rooms of the People’s Gallery and the model train room were ruined. Humanities Texas granted the Museum $3,000 to replace the carpet on the model railroad room. The floor in the People’s Gallery display room was covered with tile. No more carpet to get soaked. A new display is in place - the Harry Briscoe Santa Fe calendar collection. Be sure to check it out on your next visit.

The damage done in the Museum buildings by Hurricane Harvey is erased. About a foot of drywall had to be removed and replaced in the display room of the People’s Gallery, and then, of course, taped, mudded, smoothed and painted.

Display room in the People’s Gallery showing how much drywall had to be removed.

White tiles now cover the floors in the display room.

NEW CHAIRS FOR THE DINING DISPLAY A set of old railroad dining chairs was purchased from Ozark Mountain Rail Cars. Staff sanded and repainted the frames. Albrecht, Inc. made new seats and backs. A local trim shop made new foam covers. They are now set up at one of our dining place setting. Note the three bars under the set for placing oneâ&amp;#x20AC;&amp;#x2122;s hat when sitting down at the dinner table.

The derailment prompted an evaluation of the tracks in the yard and the tracks leading to the yard. Several switch ties, and some regular ties were replaced by Railworks

Switch controlling entry to Tracks 4 or 5 after new ties were installed.

Table with new dining chairs in the display room. The hat bars beneath the chairs can be seen. TRACK WORK IN THE RAIL YARD It was thought that there was no damage in the rail yard due to Hurricane Harvey&#39;s flooding. However, the grounds were still saturated when BNSF returned the Museum&#39;s chair cars and locomotives after evacuating them before the storm. The weight of the BNSF locomotives caused the track to compress, thus when the Museum staff began switching cars in the rail yard, the Fairbank-Morse engine and a passenger car derailed. The engine had to be rerailed using a lifting crane donated by L&amp;T Services.

Switch controlling entry to Tracks 2 or 3 after new ties were installed.

The derailed Fairbank-Morse engine. Note the tilt to the right caused by the wheels being on the ground.

Ties placed on Track 3 before installation A fine-looking piece of historic depot furniture. ANOTHER SUCCESSFUL TEXAS CHIEF RUN The Museum hosted its 4th Texas Chief special run on March 10th (the run was postponed from last September because of storm damage to the rail yard). The train ran from Galveston to the BNSF yards in South Houston and back. The Museum&#39;s two F-units performed flawlessly and video posted on line showed them running at 55 mph on tangent track between Houston and Galveston. 300 riders, including Museum staff and board, 75 First Responders, and 146 paying passengers enjoyed the fast-paced run to and from Houston. Author Eric Peterson had a table outside the People&#39;s Gallery where he sold copies of his new book, Repair of Track 4 where it enters the yard. TARIFF CABINET RESTORED Albrecht, Inc. repaired and restored the tariff cabinet, and returned it to the People&#39;s Gallery in March. This cabinet, donated to the Museum in 2017, is one of very few artifacts that was originally in the Santa Fe depot. It was bought at auction in 1973 and remained in private hands until donated to the Museum.

&quot;The Dining Car.&quot; He signed and sold 30 copies and donated 45 copies to the Museum to sell or to give as gifts.

If you missed seeing the train as it traveled to Houston and back to Galveston, a video has been posted: youtube.com/watch?v=zweyX6Jt5fY&amp;feature=youtu.be

Early morning, before everyone arrived at the depot. Engine 316 is on Track 5 to the left, and the BNSF engine that brought several chair cars to the Museum for the run is on Track 4.

Texas Chief outbound from the Museum Eric Peterson autographed copies of his book.

Texas Chief running southbound at 55 mph in a section of BNSF double track.

Board chair Dr. John Bertini giving instructions to passengers lined up waiting to board the train. THE GOOD NEWS DEPARTMENT By Don Harper, Board Member BIG BROTHER COMES TO THE MUSEUM THE SECURITY CAMERA SYSTEM IS UP AND RUNNING Smile. You are on candid camera. Personnel in the West Ticket Office now have the ability to monitor activities in the Peopleâ&amp;#x20AC;&amp;#x2122;s Gallery, the display rooms, the display cars, and the rail yard, thanks to the newly operational security camera system. This system was funded by grants from the Bromberg Foundation, headquartered in Galveston. Friend of the Museum, The Bromberg Foundation has also provided grants for the implementation and upgrade of the Museum&#39;s audio tour. Again, many thanks to Trey Dibrell and the Bromberg Foundation. The security system was badly needed, as the Museum staff is not large enough to physically check the displays on a regular basis. Docents would add to the security, so if you have some time to volunteer, you could add to the visitors&#39; experience by answering questions and help the Museum by keeping watch on displays.

PUMP CAR REPAIRS Mike Harris, friend of the Museum, took the Museum’s second pump car home to repair it. This one was in much worse shape than the car he repaired previously (reported in the 2017-2) newsletter. Mike completely disassembled the car, and its trailer car. Mike said the car needed a new connecting rod and brake application apparatus, both of which he had to fabricate. He said the trailer car was a “basket case” until he found some used wheels.

Close up photo of the display area monitor screen. CB&amp;Q Caboose Restoration Calvin Wehrle lettered and numbered the caboose after he completely restored the exterior.

CB&amp;Q 14118 lettered and numbered, Jan 2018. As you can see, the interior still needs to be refurbished. Grant proposals are in preparation to acquire the needed funding. Pump car deck being prepared.

Mike returned the rebuilt pump car and trailer car in March 2018. Morris Gould will have the two pieces mounted on section of track installed in the map room.

Mike Harris returning the restored pump and trailer cars to the Museum.

Bob Johnson died of a heart attack while dredging for gold near Round Rock, TX. He was a 71-year old Galveston resident. Bob was a retired engineer for the Missouri Pacific and Southern Pacific railroads, both now part of the Union Pacific railroad system, having served for 32 years Bob was one of the volunteers who ran the center cab locomotive 1983 when caboose rides were being given. He also assisted Morris Gould during switching operations when rail cars were being moved during track rehabilitation, and when passenger runs were being assembled. Bob served in the U.S. Army in Viet Nam. He was a 3-time power lifting record holder in Texas and later was a volunteer judge at high school power lifting meets. He was a volunteer koi judge for over 20 years. He served on the Civilian Review Board for the Galveston Police Department. He was a member of the Galveston Treasure Hunters, the Gold Prospectors Association of America and the Lost Dutchman Mining Association. A memorial service was held at the Railroad Museum on 9 December 2017 that was attended by about 100 people who came to honor Bob’s life of service to the causes he cared about. He was a good friend to the Museum and will be sorely missed. Bob is survived by his wife, Iris Speed, also a Museum volunteer, and his children and step children. NEW MUSEUM MEMBERS

Bob Johnson at the controls of center cab 1983

The lifeblood of any non-profit organization is the volunteers who give their time and money simply because they love what the organization stands for. There are many great volunteer positions available for YOU at the Galveston Railroad. Check out the types of jobs listed below and see which one (or ones) interest you! Archives Volunteer: Assist Sam Christensen with cataloguing and care of materials located in the Museumâ&amp;#x20AC;&amp;#x2122;s archives. Create new displays for artifacts. Some prior experience helpful. Times needed: weekdays and weekends. Excellent opportunity for internship. Docent: Assist Eric Bowen to conduct guided tours of the Museum grounds and watch over Museum displays. A oneday training session to familiarize the docent with railroad history and the Museum equipment and grounds is required prior to beginning tours. Times needed: weekdays and weekends. Education Volunteer: Assist in presenting educational material to merit badge classes, and school groups. Should enjoy interacting with children ages 4 through 17. A one-day training session to familiarize the volunteer with railroad history and the Museum grounds and equipment is required. Availability year around is a plus. Grounds Volunteer: Assist the groundskeeper with cutting grass, and planting, watering and weeding flowers, and picking up trash and leaves. On the job training is available if needed. Times needed: flexible to fit your schedule. Publicity Volunteer: Generate publicity notices for local newspapers and provide copy to same. Assist in keeping the Museumâ&amp;#x20AC;&amp;#x2122;s mailing list for special events and newsletter mailings up to date. Assist in preparing and mailing newsletters. Times needed: flexible to fit your schedule. Model Railroad Volunteer: Assist Stephen Duncan and Stephen Barkley to keep the model railroad display in Theater 4 running by cleaning tracks, engine and railcar wheels, replacing worn out parts, and keeping structures on the layout clean. Also act as a docent and answer questions from visitors while working on the layout. Times needed: flexible to fit your schedule. Rolling Stock Maintenance Volunteer: Assist in restoration, conservation and maintenance of rail cars and engines. Includes painting, woodworking, and upholstering, as well as metal, mechanical, and electrical work. Should have suitable work clothes and work shoes. Safety equipment can be provided. Times needed: weekends and weekdays. Right of Way Volunteer: Assist Scott LaPointe in railway track maintenance and in keeping the Museum yard and right of way clear of weeds and grass. Should enjoy heavy work. Should have suitable work clothes and work boots. Safety equipment can be provided. Times needed: weekends and weekdays. Conductor. Assist Spence Gaskin and Bruce &amp; Glenda Hehemann with passenger control during rides on Saturdays. Must be able to repeatedly climb on and off the engine or caboose. Special Events Volunteer: Assist Samantha Tan during events such as the annual train show, Santa Train, Mardi Gras, and other such events. Volunteers need only to enjoy interacting with people.