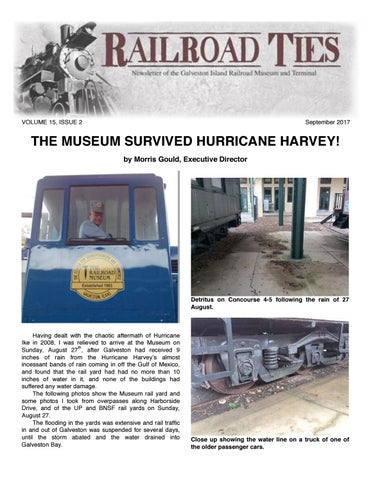 Detritus on Concourse 4-5 following the rain of 27 August.

Having dealt with the chaotic aftermath of Hurricane Ike in 2008, I was relieved to arrive at the Museum on th Sunday, August 27 , after Galveston had received 9 inches of rain from the Hurricane Harveyâ&amp;#x20AC;&amp;#x2122;s almost incessant bands of rain coming in off the Gulf of Mexico, and found that the rail yard had had no more than 10 inches of water in it, and none of the buildings had suffered any water damage. The following photos show the Museum rail yard and some photos I took from overpasses along Harborside Drive, and of the UP and BNSF rail yards on Sunday, August 27. The flooding in the yards was extensive and rail traffic in and out of Galveston was suspended for several days, until the storm abated and the water drained into Galveston Bay.

Close up showing the water line on a truck of one of the older passenger cars.

Then the heavens really opened up. Galveston received over 11 inches of rain on August 29th. The Strand was flooded and the depot had about a foot of water in it. There are no photos of the Museum during the 11-inch deluge, but there are photos of the flooding in Galveston, and post storm photos at the Museum.

Harborside Drive, Galveston looking toward the UP yard. The tracks under the car are the UP yard to wharves yard. The Museumâ&amp;#x20AC;&amp;#x2122;s lead can be seen above water for most of its length, but going under water near the junction with the wharves track.

Photo from the bridge to Pelican Island. The UP lead tracks are to the left. The BNSF yard is to the right.

Photo from Harborside Drive over pass. Most of the BNSF to wharves tracks are under water, as is the UP to former SP connector crossing the BNSF tracks.

Flooding at the entrance to the Tremont House on Mechanic Street in Galveston.

The entrance to the depot showing the waterline on the side of the building.

Samantha Tan showing the water level in the depot.

NEW CURATOR HIRED AT THE MUSEUM Sam Christensen is the museum&#39;s new Curator, replacing Ellen Rider who resigned in July to take another job as a Senior Curator for the Museum of Florida History in Tallahassee which is closer to her family Sam is from Fairhope, Alabama on the Eastern Shore of Mobile Bay. He earned a Bachelor&#39;s degree in history at Auburn University in 2013, then worked as a history teacher in South Korea for a year. Sam returned to the US to pursue a Master&#39;s Degree in Museum Studies from the University of Delaware, completing the program in May.

The display room waterlogged carpet. Some water is still present by the doors. Clean up commenced immediately after the storm moved east into Louisiana and then dissipated inland. HOUSTON &amp; TEXAS CENTRAL STATION SIGN The Railroad Museum has received another valuable artifact. Dave Salyer donated the original 1903 sign off the old Galveston, Houston &amp; Henderson (later the Missouri Pacific) depot in La Marque. His grandmother was a ticket agent there until it closed down in 1966.

Sam Christensen at his desk. SEPTEMBER TRAIN RIDE AND OCTOBER TRAIN SHOW POSTPONED Hurricane Harvey disrupted the events scheduled for the fall at the Museum. Both the train ride and the train show have been postponed until sometime in the spring of 2018. The dates for both events will be released by the Museum soon. H&amp;TC station sign THE GOOD NEWS DEPARTMENT By Don Harper, Board Member EAGLE SCOUT PROJECT RESTORES CASE STEAM TRACTOR Daniel Gonzalez, a member of Troop 554 of League City, undertook a very significant restoration effort for his Eagle Scout project. He organized and funded the repairs on the Museumâ&amp;#x20AC;&amp;#x2122;s Case tractor that is on display in the Garden of Steam. Daniel recruited a number of volunteers, including members of his Troop, as well as skilled welders, to effect badly needed repairs. The bottom of the smokebox was completely rusted out. The welders removed rusty metal on the sides, and then replaced the entire bottom of the smoke box and did some other lesser repairs.

The condition of the smokebox before repairs began.

Cleaned parts of the steering mechanism. Fabricating sections for the smoke box bottom.

Once the repairs were completed, the volunteers removed loose paint and patina and then completely repainted the tractor.

Preparing parts for the smokebox repair. Troop 554 cleaning scale and old paint off the tractor.

The new bottom for the smokebox.

Troop 554 cleaning scale and old paint off the tractor.

Ramon Garcia appraising the job to be done.

ALUMINUM CAN RECYCLING Those of you who have visited the Museum will most likely noted that the stock car had a large quantity of aluminum cans, nearly filling the north end. These cans have been accumulating, bit by bit, over the past few years. They have been brought in by supporters of the Museum. A majority of the cans were collected by Dode Leimer. Just another means of generating operating funds. Executive Director Morris Gould obtained a van and 16-foot trailer from Doug Albrecht of Albrecht Construction th on August 17 and brought it to the Museum. Morris and the staff removed all 653 pounds of cans and took them to recycling. The effort took most of the day, as it was done in exceptional heat. None of the staff complained, at least not out loud. At some point in the near future, the car will be hydroblasted to remove rust from the metal parts and rust preventative will be applied, and then paint will be applied.

The van packed almost to the gills with bags of cans. PUMP CAR Some time ago, Mike Harris of Moody, Texas, took the Museum’s pump car home with him and did a very nice refurbishing job. Mike provided the labor as a donation to the Museum and the Museum paid for the parts and paint. These pump cars (aka hand cars) typically carried 4 or more men and often had a trailing car carrying tools. They were ubiquitous before motorized work cars came along. The men, two on a side, pumped the handles. The vertical connecting rod is attached to a crank, which in turn is attached to a gear. The up and down motion is converted to rotary motion. The large pinion gear meshes with a smaller gear on one axle, causing the wheels to turn. There are two very nice explanatory videos on the web. See: www.youtube.com/watch?v=rJq_9nxVc6A and www.youtube.com/watch?v=ZpnMvKxk4lw. The workers would travel along the tracks to the work site and then do what needed to be done. To stop, one of the men would step on the red pedal on the side of the car, projecting through the deck in the second photo.

The refurbished pump car. The brake is the short, vertical shaft on this side in the photo. While the process sounds simple, there are dangers involved, which is why the pump car is kept padlocked when on display. Once underway, the handles will go up and down on their own, if the workers let go of them, and if workers were not careful, the handle might come down and break a leg. Plus, they were heavy to begin with, and if loaded down with heavy equipment, it was not easy to pump them. When not in use, these cars were usually stored in a shed along the right of way. The railroads in the era before everything was mechanized had hundreds of these pump cars for use by section gangs. Each gang was responsible for maintaining 6 to 10 miles of track – a “section.” No one knows who “invented” the pump car. Most likely, individual railroad mechanics made them to their own specifications at first. Later, companies began manufacturing them and selling them to railroads. They were extensively used during the U.S. Civil War, and immediately after, during construction of the Transcontinental Railroad. Motorized cars began to appear in the early 1900s and quickly replaced pump cars. Most of the pump cars were scrapped, especially during the World Wars when metal was needed, and relatively few survive in museums. The Galveston Railroad Museum is fortunate to have one of these vehicles that is in very fine shape.

Phot of the newly refurbished pump car. Vintage photo of a track gang and their pump car.

The lifeblood of any non-profit organization is the volunteers who give their time and money simply because they love what the organization stands for. There are many great volunteer positions available for YOU at the Galveston Railroad. Check out the types of jobs listed below and see which one (or ones) interest you! Archives Volunteer: Assist Sam Christiansen with cataloguing and care of materials located in the Museumâ&amp;#x20AC;&amp;#x2122;s archives. Create new displays for artifacts. Some prior experience helpful. Times needed: weekdays and weekends. Excellent opportunity for internship. Docent: Assist Eric Bowen to conduct guided tours of the Museum grounds and watch over Museum displays. A oneday training session to familiarize the docent with railroad history and the Museum equipment and grounds is required prior to beginning tours. Times needed: weekdays and weekends. Education Volunteer: Assist in presenting educational material to merit badge classes, and school groups. Should enjoy interacting with children ages 4 through 17. A one-day training session to familiarize the volunteer with railroad history and the Museum grounds and equipment is required. Availability year around is a plus. Grounds Volunteer: Assist the groundskeeper with cutting grass, and planting, watering and weeding flowers, and picking up trash and leaves. On the job training is available if needed. Times needed: flexible to fit your schedule. Publicity Volunteer: Generate publicity notices for local newspapers and provide copy to same. Assist in keeping the Museumâ&amp;#x20AC;&amp;#x2122;s mailing list for special events and newsletter mailings up to date. Assist in preparing and mailing newsletters. Times needed: flexible to fit your schedule. Model Railroad Volunteer: Assist Stephen Duncan and Stephen Barkley to keep the model railroad display in Theater 4 running by cleaning tracks, engine and railcar wheels, replacing worn out parts, and keeping structures on the layout clean. Also act as a docent and answer questions from visitors while working on the layout. Times needed: flexible to fit your schedule. Rolling Stock Maintenance Volunteer: Assist in restoration, conservation and maintenance of rail cars and engines. Includes painting, woodworking, and upholstering, as well as metal, mechanical, and electrical work. Should have suitable work clothes and work shoes. Safety equipment can be provided. Times needed: weekends and weekdays. Right of Way Volunteer: Assist Scott LaPointe in railway track maintenance and in keeping the Museum yard and right of way clear of weeds and grass. Should enjoy heavy work. Should have suitable work clothes and work boots. Safety equipment can be provided. Times needed: weekends and weekdays. Conductor. Assist Spence Gaskin and Bruce &amp; Glenda Hehemann with passenger control during rides on Saturdays. Must be able to repeatedly climb on and off the engine or caboose. Special Events Volunteer: Assist Samantha Tan during events such as the annual train show, Santa Train, Mardi Gras, and other such events. Volunteers need only to enjoy interacting with people. New Museum Members Since the Last Newsletter