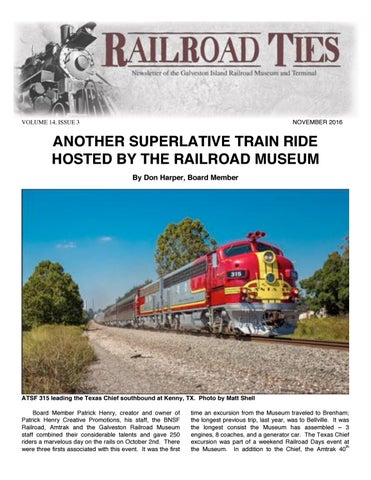 ANOTHER SUPERLATIVE TRAIN RIDE HOSTED BY THE RAILROAD MUSEUM By Don Harper, Board Member

ATSF 315 leading the Texas Chief southbound at Kenny, TX. Photo by Matt Shell Board Member Patrick Henry, creator and owner of Patrick Henry Creative Promotions, his staff, the BNSF Railroad, Amtrak and the Galveston Railroad Museum staff combined their considerable talents and gave 250 riders a marvelous day on the rails on October 2nd. There were three firsts associated with this event. It was the first

time an excursion from the Museum traveled to Brenham; the longest previous trip, last year, was to Bellville. It was the longest consist the Museum has assembled â&amp;#x20AC;&amp;#x201C; 3 engines, 8 coaches, and a generator car. The Texas Chief excursion was part of a weekend Railroad Days event at th the Museum. In addition to the Chief, the Amtrak 40

Anniversary Display Train was at the depot - the first time since 1955 that two passenger trains were at the depot at the same time. The BNSF and Amtrak equipment was brought to Galveston on Friday, 30 September; several Board members flew to Dallas-Ft. Worth and rode the train from Ft. Worth to Galveston. On Saturday, when the Museum opened, Houston channel ABC (Channel 13) news anchor Dave Ward was on hand to greet everyone, as was Michael Haverty, past chairman of the Santa Fe Railroad. The Amtrak train was open on both Saturday and Sunday. The cars carried displays and artifacts from the 40 years of Amtrak history. On Saturday, Amtrak employees tallied over 2,500 individuals entering the display cars to view the exhibits, no doubt drawn in part by the history and in part by free admission to the Museum. Attendance on Sunday was considerably less. With limited room in the yard, several of the Museum’s freight cars had to be moved out of the yard and were taken to the nearby Union Pacific yard for temporary storage. Even then, the Texas Chief had to be split. The fun began in the early morning hours of Sunday, nd October 2 . The BNSF engine, which was on Track 4, was moved out of the yard and backed on to Track 5, where it coupled to Patrick Henry’s two cars. These were moved onto track 4 and coupled to the other cars of the Texas Chief consist.

BNSF 3962 being readied on Track 4. To the left is the observation platform of the Warren R. Henry ahead of the Amtrak train on Track 5.

BNSF 3962 backing carefully to couple to the Warren R. Henry on Track 5.

The combined consist was so long, it blocked 28 Street, which is why it was split up when brought to the Museum.

The Museum opened to passengers at 8 AM. Shipley Donuts, of Galveston, provided several boxes of donuts and coffee for the early arrivers. Patrick Henry’s staff were stationed at tables, checking off passengers’ names and giving them badges, lunch coupons and timetables, and directing them onto their assigned coaches.

Patrick Henry’s staff ready for passengers to pick up their badges.

Greg Smith landing his drone after photographing the train.

By 8:30 a.m. there was a fairly large crowd assembled and boarding began. Advisory Board member Greg Smith brought his drone and did a fly by along the entire length of the train while the boarding process was proceeding, before boarding himself. Special guest Dan Pastorini rode in the Warren R. Henry observation car for much of the trip and obligingly autographed photos of himself in action during an Oilers’ game. For a time, he rode in the Amtrak car and visited with a contingent of Galveston First Responders. Other special guests on board were Joe Faust, BNSF Director of Public Affairs, Tim Cooper, Amtrak Asst. Superintendent of Road Operations, SW Division, Rich Wessler, BNSF Dir-

Former Houston Oilers quarterback, Dan Pastorini, chatting with passengers. The Texas Chief was scheduled to depart at 9 AM, but a leaking hose delayed the departure by 15 minutes. The train carefully picked its way along the Museum lead track, through the switches of the UP yard and then moved along the UP lead to the Galveston Railroad Causeway lift bridge. After a brief wait for the bridge to go down, the train proceeded to the mainland. ‘then Amtrak engineer John Pattison started notching the throttle out making very good time heading north along the former Santa Fe tracks. The only glitch in the journey occurred south of Alvin. The train stopped for a few minutes because the generator in the F-unit shut down, depriving folks in the cars ahead

of the unit lights and AC. Once the generator was restarted, there were no more problems.

The Texas Chief route to and from Galveston.

And rusted automobiles, although I didn’t photograph those. BNSF gave us all “highball” (green) signals on both legs of the trip, so the only slower speeds occurred as we passed through towns that had imposed speed limits. Plus, the entire route was on the broad, flat Texas coastal plain, so there were no hills to contend with.. We passed several freight trains “in the hole”, i.e. off on sidings, waiting for the Texas Chief to pass by.

The train raced past Alvin station, 30 miles from Galveston, which was, in the early days of excursions, the destination. We were moving so fast I couldn’t get a decent photo. The next waypoint was Rosenberg. We slowed going through town, so got a good look at the folks assembled to wave and take photos as we passed. As we headed north, we passed, as the song goes, houses

BNSF 3962 about to pass southbound BNSF 7344, waiting on a siding. Lunch was served around noon. Passengers were given boxed lunches and drinks as the train rolled along. There was a fairly large crowd on hand to wave and take photos in Bellville, which was the train’s destination last year. In Brenham, the largest crowd of the day was on hand to greet the train as it slowed to a stop. The high school band had assembled and played for the passengers while the train was stopped. It was a very festive occasion.

A line of vehicles paced the train for a good distance on the return trip, something we didn’t see as much of on the outbound trip.

Brenham High School band and residents who turned out to greet the Texas Chief as it rolled into town.

Vehicles pacing the F-units southbound, from the observation deck of the Warren R. Henry

After the train pulled to a stop, the Warren R. Henry was a considerable distance from the crowd and band. As we were standing on the observation deck, the most interesting individual of the day appeared. He drove up in his pickup truck, got out, and we witnessed the most unusual sartorial collection – cut off blue jeans over black leggings, cowboy boots, a shirt with the sleeves cut off at the shoulder, and cowboy hat. And it looks like he might have a gun in a holster on his right hip.

Matt Shell, whose photo heads this article, was in one of the vehicles and got a nice photo of the two F-units leading the train south.

315 on the point and 316 behind, southbound. Photo by Matt Shell. Folks were waiting at grade crossings, sometimes in groups, sometimes alone, to watch, and photograph, the train on the return trip also.

The Brenham “character.” The highlight of the Brenham stop was the ice cream cups supplied by the Blue Bell ice cream factory in Brenham, enough for dessert for all the passengers on the train. Cases of the cups were delivered and brought on board. The kitchen on the Warren R. Henry also took the opportunity to restock crushed ice. At about 1:15, the engineer exited BNSF 3962 and walked to the Museum’s F-units. After a brake test, the train departed Brenham at 1:30 PM, with the Museum’s two F-units on the point. I measured the time between mile posts a couple of times. The fastest reading was 1 minute, 7 seconds, which translates to about 55 mph.

Police, EMTs and townspeople of Sealy, TX, greeting the train as it passed. The First Responders had all the lights on their vehicles flashing.

The Galveston Causeway lift bridge was down before we arrived at the causeway, and the train crossed the bridge and proceeded onto Galveston Island at the same slow speed as on the northward journey. The train moved through the UP yard and onto the Museumâ&amp;#x20AC;&amp;#x2122;s lead track.

A lone photographer, who had probably been standing in the shade of the control box while waiting for the train, as it was a very warm afternoon. There are some broad curves on the route. The photo below gives an idea of the length of the train as it rounded one of those curves. The lead engines are barely visible.

Shearn Moody Plaza, the former Santa Fe office building in Galveston seen through the dome car window toward the end of the journey. 315-316 brought the train to a stop on the Museumâ&amp;#x20AC;&amp;#x2122;s Track 4 at 4:30. A lot of very happy, and very satisfied, passengers detrained and headed for their cars.

Passengers disembarking from the coaches.

The entire train, sans BNSF 3962, photographed from the observation platform of the Warren R. Henry as the train rounded a curve.

All in all, it was a most delightful trip. Serious rail fans were able to add the rare Bellville to Brenham mileage to their collection. Ordinary folks got to enjoy the scenery as it flew by, and also enjoy the food supplied and especially the ice cream from Blue Bell. No guarantees, but the hope is that there will be another opportunity to travel by passenger train next year.

Following are a series of images made by Board Member Ken Zimmern on board the Texas Chief.

Relaxing in the lower level of the Warren R. Henry. In the right photograph, Patrick Henry, with his back to the camera, sits in his favorite chair, watching the scenery roll by.

Brenhamites waving goodbye to the train as it heads south.

Passengers eating lunch in one of the coaches.

Joe Faust, BNSF Director of Public Affairs (center) visits with some of the special guests in the Warren R. Henry dome. Approaching the Museum yard, with Shearn Moody Plaza in the distance.

And finally a few photos taken in various locations along the way.

This fellow, trailering two antique cars, followed the train for a considerable distance.

Folks at Sealy watching the train go by.

NEW MEMBERS OF THE RAILROAD MUSEUM IN 2016