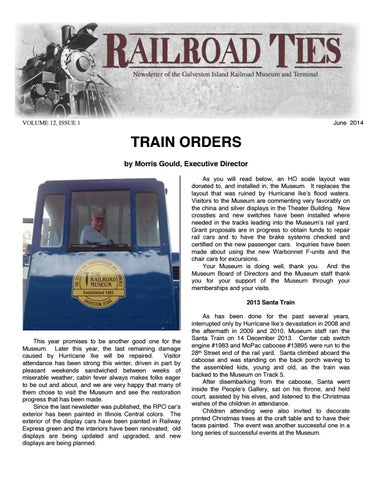 TRAIN ORDERS by Morris Gould, Executive Director As you will read below, an HO scale layout was donated to, and installed in, the Museum. It replaces the layout that was ruined by Hurricane Ike’s flood waters. Visitors to the Museum are commenting very favorably on the china and silver displays in the Theater Building. New crossties and new switches have been installed where needed in the tracks leading into the Museum’s rail yard. Grant proposals are in progress to obtain funds to repair rail cars and to have the brake systems checked and certified on the new passenger cars. Inquiries have been made about using the new Warbonnet F-units and the chair cars for excursions. Your Museum is doing well, thank you. And the Museum Board of Directors and the Museum staff thank you for your support of the Museum through your memberships and your visits. 2013 Santa Train

This year promises to be another good one for the Museum. Later this year, the last remaining damage caused by Hurricane Ike will be repaired. Visitor attendance has been strong this winter, driven in part by pleasant weekends sandwiched between weeks of miserable weather; cabin fever always makes folks eager to be out and about, and we are very happy that many of them chose to visit the Museum and see the restoration progress that has been made. Since the last newsletter was published, the RPO car’s exterior has been painted in Illinois Central colors. The exterior of the display cars have been painted in Railway Express green and the interiors have been renovated; old displays are being updated and upgraded, and new displays are being planned.

As has been done for the past several years, interrupted only by Hurricane Ike’s devastation in 2008 and the aftermath in 2009 and 2010, Museum staff ran the Santa Train on 14 December 2013. Center cab switch engine #1983 and MoPac caboose #13895 were run to the 28th Street end of the rail yard. Santa climbed aboard the caboose and was standing on the back porch waving to the assembled kids, young and old, as the train was backed to the Museum on Track 5. After disembarking from the caboose, Santa went inside the People’s Gallery, sat on his throne, and held court, assisted by his elves, and listened to the Christmas wishes of the children in attendance. Children attending were also invited to decorate printed Christmas trees at the craft table and to have their faces painted. The event was another successful one in a long series of successful events at the Museum.

Santa greeting the assembled crowd as the caboose approached the end of Track 5.

Santa poses for a photograph with one of his supplicants, assisted by his elf, Mary Firebaugh.

Santa (Larry Charpentier) takes his ease after the show. 2014 MARDI GRAS EVENT The Krewe of Maximillian held its annual Mardi Gras ball in the Museum. The Garden of Steam was filled with tents holding tables, food and entertainment. Morris and his crew emptied the Peopleâ&amp;#x20AC;&amp;#x2122;s Gallery of statues and benches to make room for the annual Krewe ball. NEW MUSEUM STAFF

Gloria Gould and one of the daddies assisting with craft making in the Peopleâ&amp;#x20AC;&amp;#x2122;s Gallery.

Two new individuals have been hired at the Museum. Ellen Ferrill is the new Exhibit and Curator. Lauren Llanes is the new Marketing Director and Events Coordinator, replacing Sandi Cobb. A complete write up, with photos, will be included in the next newsletter. We are pleased to have them as part of the Museum family.

THE GOOD NEWS DEPARTMENT By Don Harper, Board Member NEW HO SCALE LAYOUT Last year, the Museum was contacted by the George family of Bay City, west of Houston, and informed that Larry George, an avid HO scale model railroader, had passed away and the family wanted to donate a large (325 sq ft.) layout to the Museum. Executive Director Morris Gould visited the George home to view the layout and enthusiastically agreed that the layout would be an excellent replacement for the HO scale layout that was ruined by Hurricane Ikeâ&amp;#x20AC;&amp;#x2122;s flood waters. Board member Steve Barkley, who ortganizes the model railroad show in October, volunteered to oversee the move from the George home to the Museum, and installation of the layout in Theater 4. He recruited Mike Mackey, co-chair of the Lone Star Region membership

committee, and a layout builder, to do the physical labor associated with disassembling the layout, packing it, transporting it to Galveston, and reassembling it. The layout was Digital Command Control (DCC) equipped when donated. A new DCC control system was purchased, along with controllers, that upgraded and enhanced the existing system. The layout can be run by Museum volunteer operators inside the room, and will be automated as soon as the remote control initiator is installed. The detail is exquisite. Here are seven photos, two longer shots and five close ups, of the layout for your enjoyment. The Museum is indebted to the George family for their donation.

A harbor scene. Note the ripples on the water. One end of the layout

A long scene with mountains.

marvelous job of creating new displays, showcasing the Museumâ&amp;#x20AC;&amp;#x2122;s collection of china and silverware used by various railroads. The first photo below shows a portion of the collection housed in Theater Building room 1. Also in the room, arranged on one wall, are railroad heralds from fallen flags (railroads no longer in existence).

A portion of the china display in Theater Building room 1.

The photo below, made in Theater Building room 2, depicts some of the silver dining service in the Museumâ&amp;#x20AC;&amp;#x2122;s collection. The first photo on the next page shows one of three displays of complete table settings that a traveler would have seen when seated in the dining car. The setting in the photo is from the Missouri Pacific Railroad. The other two are from the Atchison, Topeka and Santa Fe, and the Pennsylvania railroads.

A station scene. RAILROAD CHINA AND SILVER DISPLAYS Amanda Vance and her assistants have done a

A portion of the silver on display in theater building room 2.

largely faded to the point where there is almost no color remaining. This is being corrected. Derek Anderson has undertaken restoration of the murals.

Derek Anderson working on one of the murals.

A china and silver display, and route map, from the Missouri Pacific Railroad, one of three such displays Another improvement make in the theater building was lining the hallways between display rooms with photos. Shown below is one of the passages.

The finished mural. LIBRARY IMPROVEMENTS The library experience was recently vastly improved. Marketing Director Sandi Cobb found a conference table and 6 chairs listed in the local paper. The table has a â&amp;#x20AC;&amp;#x153;crackedâ&amp;#x20AC;? glass center. The wood, and chairs, have a mahogany finsh. Sandi haggled a bit and managed to acquire the set for $200.

Photos lining the hallway between the O-scale and HO-scale display rooms. RENEWAL OF MUSEUM MURALS Visitors to the Museum have probably observed that the murals on the walls surrounding WBTS engine #1 have

The new table and chairs in the library.

GOODBYE AMANDA Amanda Vance, the Museum’s creative genius responsible for the displays in the Theater Building and some displays in the People’s Gallery, plus maintaining the Museum’s web site, has left the employ of the Museum. Amanda took a leave of absence in November near her due date, but returned to the Museum in January, bringing Samantha with her. But, she decided that trying to juggle work and the baby, and wanting to finish her graduate degree, was pulling her in too many directions at once. Her last day was March 7th. Amanda’s creativity and hard work will be missed by the Museum, but we wish her the best.

Eric explaining the operation of a dining car. Bruce and Glenda Hehemann Bruce and his wife Glenda have volunteered at railroad museums elsewhere, and when they moved to La Porte, TX, it was only natural that they would seek out a museum needing assistance. Both serve as conductors on the Harborside Express runs on Saturdays, and also act as brakemen during car shifting in the yard.

Amanda Vance on her last day at work. MEET TWO OF THE VOLUNTEERS The Museum is indeed fortunate to have attracted dedicated volunteers to assist with its activities. Eric Bowen Docent Eric comes to the Museum once a month and leads tours of cars that are normally closed to the public, explaining details about the cars and their use. Eric is also a collector of streamliner timetables. See his website at www.streamlineschedules.com. Conductor Bruce on the rear of the MoPac caboose.

The lifeblood of any non-profit organization is the volunteers who give their time and money simply because they love what the organization stands for. There are many great volunteer positions available for YOU at the Galveston Railroad. Check out the types of jobs listed below and see which ones interest you! Archives Volunteer: Assist with cataloguing and care of materials located in the Museumâ&amp;#x20AC;&amp;#x2122;s archives. Create new displays for artifacts. Some prior experience helpful. Times needed: weekdays and weekends. Docent: Assist Eric Bowen to conduct guided tours of the Museum grounds and watch over Museum displays. A oneday training session to familiarize the docent with railroad history and the Museum equipment and grounds is required prior to beginning tours. Times needed: weekdays and weekends. Education Volunteer: Assist in presenting educational material to merit badge classes, Pullman Parties, and school groups. Should enjoy interacting with children ages 4 through 17. A one-day training session to familiarize the volunteer with railroad history and the Museum grounds and equipment is required. Availability year around is a plus. Grounds Volunteer: Assist the groundskeeper with cutting grass, and planting, watering and weeding flowers, and picking up trash and leaves. On the job training is available if needed. Times needed: flexible to fit your schedule. Publicity Volunteer: Generate publicity notices for local newspapers and provide copy to same. Assist in keeping the Museumâ&amp;#x20AC;&amp;#x2122;s mailing list for special events and newsletter mailings up to date. Assist in preparing and mailing newsletters. Times needed: flexible to fit your schedule. Model Railroad Volunteer: Assist Stephen Duncan and Joseph Maytum to keep the model railroad display in Theater 4 running by cleaning tracks, engine and railcar wheels, replacing worn out parts, and keeping structures on the layout clean. Also act as a docent and answer questions from visitors while working on the layout. Times needed: flexible to fit your schedule. Rolling Stock Maintenance Volunteer: Assist in restoration, conservation and maintenance of rail cars and engines. Includes painting, woodworking, and upholstering, as well as metal, mechanical, and electrical work. Should have suitable work clothes and work shoes. Safety equipment can be provided. Times needed: weekends and weekdays. Way and Track Volunteer: Assist Scott LaPointe in railway track maintenance and in keeping the Museum yard and right of way clear of weeds and grass. Should enjoy heavy work. Should have suitable work clothes and work boots. Safety equipment can be provided. Times needed: weekends and weekdays. Conductor. Assist Bruce &amp; Glenda Hehemann with passenger control during rides on Saturdays. Must be able to repeatedly climb on and off the engine or caboose. Special Events Volunteer: Assist the Museum staff during events such as the annual train show, Hobo Night, the Santa Train, Mardi Gras, and other such events. Volunteers need only to enjoy interacting with