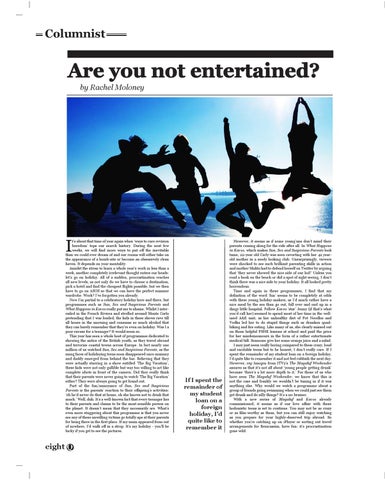 Are you not entertained? by Rachel Moloney

t’s about that time of year again when ‘ways to cure revision boredom’ tops our search history. During the next few

However, it seems as if some young’uns don’t mind their parents coming along for the ride after all. In What Happens in Kavos, which makes Sun, Sex and Suspicious Parents look tame, 22-year old Carly was seen cavorting with her 42 yearold mother in a seedy looking club. Unsurprisingly, viewers were shocked to see such brilliant parenting skills in action and mother Malita had to defend herself on Twitter by arguing that ‘they never showed the nice side of our hol!’ Unless you read a book on the beach or did a spot of sight-seeing, I don’t think there was a nice side to your holiday. It all looked pretty horrendous.

than we could ever dream of and our rooms will either take on the appearance of a bomb-site or become an obsessively clean haven. It depends on your mentality. Amidst the stress to learn a whole year’s work in less than a week, another completely irrelevant thought enters our heads: let’s go on holiday. All of a sudden, procrastination reaches all new levels, as not only do we have to choose a destination, have to go on ASOS so that we can have the perfect summer wardrobe. Work? I’ve forgotten you already. Now I’m partial to a celebratory holiday here and there, but programmes such as Sun, Sex and Suspicious Parents and What Happens in Kavos really put me to shame. Whilst I interrailed in the French Riviera and strolled around Monte Carlo pretending that I was loaded, the kids in these shows rave till all hours in the morning and consume so much alcohol that they can barely remember that they’re even on holiday. Was I a poor excuse for a teenager? It would seem so. This year has seen a whole host of programmes dedicated to showing the antics of the British youth, as they travel abroad and terrorise coastal towns across Europe. In fact nearly one million of us watched Sun, Sex and Suspicious Parents, as the smug faces of holidaying teens soon disappeared once mummy and daddy emerged from behind the bar. Believing that they were actually starring in a show entitled ‘The Big Vacation’, these kids were not only gullible but way too willing to act like complete idiots in front of the camera. Did they really think that their parents were never going to watch ‘The Big Vacation’ either? They were always going to get found out. Part of the fun/annoyance of Sun, Sex and Suspicious Parents ‘oh he’d never do that at home, oh she knows not to drink that much.’ Well, duh. It’s a well-known fact that every teenager lies to their parents and claims to be the most sensible person on the planet. It doesn’t mean that they necessarily are. What’s even more staggering about this programme is that you never see any of these unwilling victims go totally ape at their parents lucky if you get to see the pictures.

with these young holiday-makers, as I’d much rather have a nice meal by the sea than go out, fall over and end up in a dingy little hospital. Fellow Kavos ‘star’ Jenny (if that’s what you’d call her) seemed to spend most of her time in the wellused A&E unit, as her unhealthy diet of Pot Noodles and Vodka led her to do stupid things such as drunken quad-

If I spent the remainder of my student loan on a foreign holiday, I’d quite like to remember it

on those helpful PSHE lessons at school and paid the price for her misdemeanours in the form of a rather extortionate medical bill. Someone give her some orange juice and a salad. I may just seem really boring compared to these crazy, loud and excitable teens but to be honest, I don’t really care. If I spent the remainder of my student loan on a foreign holiday, I’d quite like to remember it and not feel rubbish the next day. However, rep Imogen from ITV2’s The Magaluf Weekender assures us that it’s not all about ‘young people getting drunk’ because ‘there’s a lot more depth to it.’ For those of us who have seen The Magaluf Weekender, we know that this is not the case and frankly we wouldn’t be tuning in if it was anything else. Why would we watch a programme about a group of friends going swimming when we could just see them get drunk and do silly things? It’s a no-brainer. With a new series of Magaluf and Kavos already hedonistic teens is set to continue. You may not be as crazy as you prepare for your highly-deserved trip abroad. So whether you’re catching up on iPlayer or sorting out travel arrangements for Benicassim, have fun: it’s procrastination gone wild. 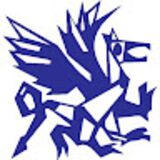