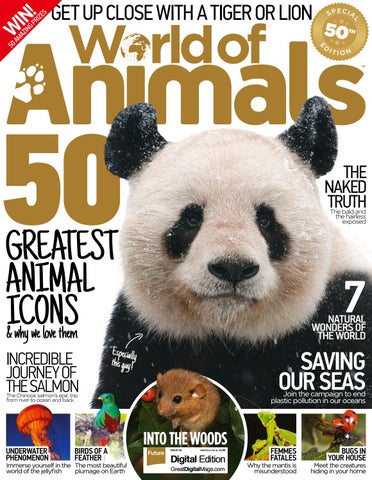 Get up close with a tiger or lion

THE NAKED TRUTH The bald and the hairless exposed

NATURAL WONDERS OF THE WORLD

Join the campaign to end plastic pollution in our oceans

Birds of a feather

into the woods Issue 50

PRINTED IN THE UK

Why the mantis is misunderstood

Bugs in your house

Meet the creatures hiding in your home

Welcome I can’t believe we’ve already made 50 issues of World of Animals! To celebrate this special 50th issue we’ve put together our list of some of the greatest animal icons ever to roam the Earth. From conservation ambassadors like the giant panda, to cute internet sensations and animals that we grew up with, we’re celebrating why and how these species stand out (check it out on page 42). As it’s our golden 50th issue, this month’s gallery (page 34) will dazzle you with its stunning golden animals, and we’ve even got a 50th giveaway (page 62) with some incredible prizes to thank you, our readers. On top of that, we’ve been out and about watching the release of hazel dormice back into their native woods (page 12), discussed how to stop plastic pollution in our oceans (page 18) and explored the beautiful natural wonders of the world (page 26). It’s been an exciting issue to work on and we hope you enjoy reading it!

Editor’s picks Saving our seas It’s great to see so many organisations getting involved in beach clean-ups and plastic pollution campaigns. We’ll be doing our own beach clean-up in September. We hope the feature on page 18 inspires you to take action, too. Misunderstood monster There’s nothing I love more than reading a feature on why an animal is misunderstood. It’s fascinating how animals have bad reputations which are so often unfair. Find out the truth about the cannibalistic praying mantis on page 66.

I loved learning new ways to help protect marine life on page 18. As a result, the WOA team are organising our own beach clean!

From lightening tongues to swivelling eyes, chameleons are remarkable reptiles. And they’re not just red, gold and green.

I went to a secret location to see the reintroduction of rare hazel dormice – find out what happened on page 12!

Want to read the magazine online? Download the Future Folio app on the Apple store.

Join the campaign to end plastic pollution in our oceans

26 E  xplore the Earth: 7 Natural Wonders Meet the inhabitants of the most beautiful locations on our planet

Meet the snouted swamp swimmer who never knows its parents

Throughout World of Animals you will see symbols like the ones listed below. These are from the IUCN Red List of Threatened Species, the most comprehensive inventory of the global conservation status of animal species in the world. Hereâ&#x20AC;&#x2122;s what they mean:

From conservation ambassadors to cute internet sensations, discover the most loved animals on our planet

66 Femmes fatales Why the praying mantis is misunderstood

72 A  ll about jellyfish Discover these ethereal underwater phenomenons

84 Incredible journey Follow the epic journey of the Chinook salmon

Find out why this highly social bird was driven to extinction

GrEATEST ANIMAL ICONS & why we love them 18

In breeding season, rival males like this pair scrabble for access to space and vixens, usually making a racket in the process. In what amounts to a test of strength, the loser will be chased away Red foxes are solitary creatures and usually keep to themselves, but during mating season males will fight if one ventures into anotherâ&#x20AC;&#x2122;s territory in his search for females. The rival foxes fight on their hind legs, biting, scratching and trying to push each other over.

This female brown bear is clearly relieved to have been reunited with her curious little cub after the youngster wandered away from her across the mudflats in search of adventure Baby bears become more inquisitive with age, so their mothers have to keep a close eye on their whereabouts. Brown bears hunt for salmon in the Alaskan lakes and dig up the mud in search of razor clams at low tide, with their young observing and practising as they grow.

They may be seen as peaceful and graceful animals, but wild horses can get into fierce fights when there’s a dispute in the herd Wild horses live in herds led by one dominant male who has exclusive breeding access to all of the females. Fights can break out between horses over watering holes or grazing areas, but the most ferocious duels – often resulting in serious injury for the loser – happen when another male challenges a lead stallion.

This cheeky seagull is poised to pilfer a hardearned meal from an unfortunate pelican, perching on its head while it fishes Theyâ&#x20AC;&#x2122;re known for pinching chips and ice cream at the seaside, but itâ&#x20AC;&#x2122;s not just humans that seagulls steal from. This pelican had managed to catch a fish and hold it underwater for protection, only to have it taken by the opportunistic scavenger as soon as it lifted its beak. Animals that steal food from others are known as kleptoparasites.

WOODS In woodlands around the UK, the endearing hazel dormouse is making a quiet comeback thanks to a nationwide reintroduction programme Words Victoria Williams Once a year, a group of volunteers and experts gathers at a secret location somewhere in the UK to release rare dormice. Since 1993, 898 dormice have been released as part of an effort to reintroduce them to areas in the UK where theyâ&#x20AC;&#x2122;ve gone extinct. Hazel dormice are also known as common dormice, but this alternative name is no longer very accurate. Having been around for over 10,000 years, Britainâ&#x20AC;&#x2122;s only native dormouse species is in decline and has already gone extinct in 17 counties. They were once so widespread that people, including famous writer and illustrator Beatrix Potter, kept them as pets.