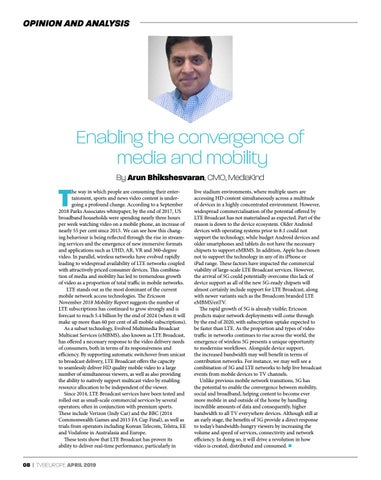 Enabling the convergence of media and mobility

he way in which people are consuming their entertainment, sports and news video content is undergoing a profound change. According to a September 2018 Parks Associates whitepaper, by the end of 2017, US broadband households were spending nearly three hours per week watching video on a mobile phone, an increase of nearly 55 per cent since 2015. We can see how this changing behaviour is being reflected through the rise in streaming services and the emergence of new immersive formats and applications such as UHD, AR, VR and 360-degree video. In parallel, wireless networks have evolved rapidly leading to widespread availability of LTE networks coupled with attractively priced consumer devices. This combination of media and mobility has led to tremendous growth of video as a proportion of total traffic in mobile networks.   LTE stands out as the most dominant of the current mobile network access technologies. The Ericsson November 2018 Mobility Report suggests the number of LTE subscriptions has continued to grow strongly and is forecast to reach 5.4 billion by the end of 2024 (when it will make up more than 60 per cent of all mobile subscriptions). As a subset technology, Evolved Multimedia Broadcast Multicast Services (eMBMS), also known as LTE Broadcast, has offered a necessary response to the video delivery needs of consumers, both in terms of its responsiveness and efficiency. By supporting automatic switchover from unicast to broadcast delivery, LTE Broadcast offers the capacity to seamlessly deliver HD quality mobile video to a large number of simultaneous viewers, as well as also providing the ability to natively support multicast video by enabling resource allocation to be independent of the viewer.  Since 2014, LTE Broadcast services have been tested and rolled out as small-scale commercial services by several operators; often in conjunction with premium sports. These include Verizon (Indy Car) and the BBC (2014 Commonwealth Games and 2015 FA Cup Final), as well as trials from operators including Korean Telecom, Telstra, EE and Vodafone in Australasia and Europe. These tests show that LTE Broadcast has proven its ability to deliver real-time performance, particularly in

live stadium environments, where multiple users are accessing HD content simultaneously across a multitude of devices in a highly concentrated environment. However, widespread commercialisation of the potential offered by LTE Broadcast has not materialised as expected. Part of the reason is down to the device ecosystem. Older Android devices with operating systems prior to 8.1 could not support the technology, while budget Android devices and older smartphones and tablets do not have the necessary chipsets to support eMBMS. In addition, Apple has chosen not to support the technology in any of its iPhone or iPad range. These factors have impacted the commercial viability of large-scale LTE Broadcast services. However, the arrival of 5G could potentially overcome this lack of device support as all of the new 5G-ready chipsets will almost certainly include support for LTE Broadcast, along with newer variants such as the Broadcom branded LTE eMBMS/enTV. The rapid growth of 5G is already visible; Ericsson predicts major network deployments will come through by the end of 2020, with subscription uptake expected to be faster than LTE. As the proportion and types of video traffic in networks continues to rise across the world, the emergence of wireless 5G presents a unique opportunity to modernise workflows. Alongside device support, the increased bandwidth may well benefit in terms of contribution networks. For instance, we may well see a combination of 5G and LTE networks to help live broadcast events from mobile devices to TV channels.  Unlike previous mobile network transitions, 5G has the potential to enable the convergence between mobility, social and broadband, helping content to become ever more mobile in and outside of the home by handling incredible amounts of data and consequently, higher bandwidth to all TV everywhere devices. Although still at an early stage, the benefits of 5G provide a direct response to today’s bandwidth-hungry viewers by increasing the volume and speed of services, connectivity and network efficiency. In doing so, it will drive a revolution in how video is created, distributed and consumed. n