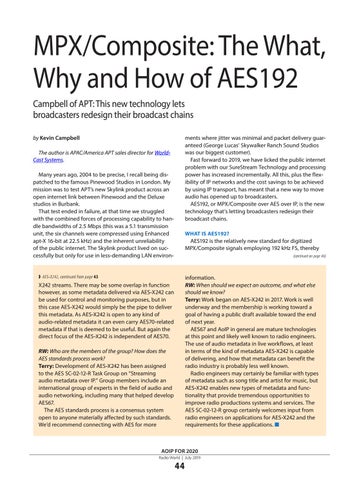 MPX/Composite: The What, Why and How of AES192 Campbell of APT: This new technology lets broadcasters redesign their broadcast chains by Kevin Campbell

ments where jitter was minimal and packet delivery guaranteed (George Lucas’ Skywalker Ranch Sound Studios was our biggest customer). Fast forward to 2019, we have licked the public internet problem with our SureStream Technology and processing power has increased incrementally. All this, plus the flexibility of IP networks and the cost savings to be achieved by using IP transport, has meant that a new way to move audio has opened up to broadcasters. AES192, or MPX/Composite over AES over IP, is the new technology that’s letting broadcasters redesign their broadcast chains.

The author is APAC/America APT sales director for WorldCast Systems. Many years ago, 2004 to be precise, I recall being dispatched to the famous Pinewood Studios in London. My mission was to test APT’s new Skylink product across an open internet link between Pinewood and the Deluxe studios in Burbank. That test ended in failure, at that time we struggled with the combined forces of processing capability to handle bandwidths of 2.5 Mbps (this was a 5.1 transmission unit, the six channels were compressed using Enhanced apt-X 16-bit at 22.5 kHz) and the inherent unreliability of the public internet. The Skylink product lived on successfully but only for use in less-demanding LAN environ-

information. RW: When should we expect an outcome, and what else should we know? Terry: Work began on AES-X242 in 2017. Work is well underway and the membership is working toward a goal of having a public draft available toward the end of next year. AES67 and AoIP in general are mature technologies at this point and likely well known to radio engineers. The use of audio metadata in live workflows, at least in terms of the kind of metadata AES-X242 is capable of delivering, and how that metadata can benefit the radio industry is probably less well known. Radio engineers may certainly be familiar with types of metadata such as song title and artist for music, but AES-X242 enables new types of metadata and functionality that provide tremendous opportunities to improve radio productions systems and services. The AES SC-02-12-R group certainly welcomes input from radio engineers on applications for AES-X242 and the requirements for these applications. n

X242 streams. There may be some overlap in function however, as some metadata delivered via AES-X242 can be used for control and monitoring purposes, but in this case AES-X242 would simply be the pipe to deliver this metadata. As AES-X242 is open to any kind of audio-related metadata it can even carry AES70-related metadata if that is deemed to be useful. But again the direct focus of the AES-X242 is independent of AES70. RW: Who are the members of the group? How does the AES standards process work? Terry: Development of AES-X242 has been assigned to the AES SC-02-12-R Task Group on “Streaming audio metadata over IP.” Group members include an international group of experts in the field of audio and audio networking, including many that helped develop AES67. The AES standards process is a consensus system open to anyone materially affected by such standards. We’d recommend connecting with AES for more