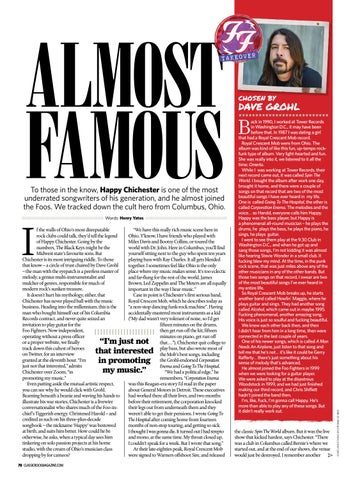 B To those in the know, Happy Chichester is one of the most underrated songwriters of his generation, and he almost joined the Foos. We tracked down the cult hero from Columbus, Ohio.

“We have this really rich music scene here in Ohio. Y’know, I have friends who played with Miles Davis and Bootsy Collins, or toured the world with Dr. John. Here in Columbus, you’ll find yourself sitting next to the guy who spent ten years playing bass with Ray Charles. It all gets blended together. I sometimes feel like Ohio is the only place where my music makes sense. It’s too eclectic and far-flung for the rest of the world. James Brown, Led Zeppelin and The Meters are all equally important in the way I hear music.” Case in point is Chichester’s first serious band, Royal Crescent Mob, which he describes today as “a non-stop dancing funk-rock machine”. Having accidentally mastered most instruments as a kid (“My dad wasn’t very tolerant of noise, so I’d get fifteen minutes on the drums, then get run off the kit, fifteen minutes on piano, get run off that…”), Chichester quit college to play bass, but also wrote most of the Mob’s best songs, including the Grohl-endorsed Corporation Enema and Going To The Hospital. “We had a political edge,” he remembers. “Corporation Enema was this Reagan-era story I’d read in the paper about General Motors in Detroit. These executives had worked there all their lives, and two months before their retirement, the corporation knocked their legs out from underneath them and they weren’t able to get their pensions. I wrote Going To The Hospital after coming home from fourteen months of non-stop touring, and getting so sick I thought I was gonna die. It turned out I had strepto and mono, at the same time. My throat closed up. I couldn’t speak for a week. But I wrote that song.” At their late-eighties peak, Royal Crescent Mob were signed to Warners offshoot Sire, and released

“I’m just not that interested in promoting my music.”

the classic Spin The World album. But it was the live show that kicked hardest, says Chichester. “There was a club in Columbus called Bernie’s where we started out, and at the end of our shows, the venue would just be destroyed. I remember another

f the walls of Ohio’s most disreputable rock clubs could talk, they’d tell the legend of Happy Chichester. Going by the numbers, The Black Keys might be the Midwest state’s favourite sons. But Chichester is its most intriguing riddle. To those that know – a circle of trust chaired by Dave Grohl – the man with the eyepatch is a peerless master of melody, a genius multi-instrumentalist and mulcher of genres, responsible for much of modern rock’s sunken treasure. It doesn’t hurt his mythology, either, that Chichester has never played ball with the music business. Heading into the millennium, this is the man who bought himself out of his Columbia Records contract, and never quite seized an invitation to play guitar for the Foo Fighters. Now independent, operating without a press officer or a proper website, we finally track down this cultest of heroes on Twitter, for an interview granted at the eleventh hour. “I’m just not that interested,” admits Chichester over Zoom, “in promoting my music.” Even putting aside the mutual artistic respect, you can see why he would click with Grohl. Beaming beneath a beanie and waving his hands to illustrate his war stories, Chichester is a livewire conversationalist who shares much of the Foo-inchief’s Tiggerish energy. Christened Harold – and credited as such on his three-plus-decade songbook – the nickname ‘Happy’ was bestowed at birth, and suits him better. How could he be otherwise, he asks, when a typical day sees him tinkering on solo passion projects at his home studio, with the cream of Ohio’s musician class dropping by for cameos?

ack in 1990, I worked at Tower Records in Washington D.C., it may have been before that. In 1987 I was dating a girl that had a Royal Crescent Mob record. Royal Crescent Mob were from Ohio. The album was kind of like this fun, up-tempo rockfunk type of album. Very light-hearted and fun. She was really into it, we listened to it all the time: Omerta. While I was working at Tower Records, their next record came out, it was called Spin The World. I bought the album after work one day, brought it home, and there were a couple of songs on that record that are two of the most beautiful songs I have ever heard in my life. One is called Going To The Hospital, the other is called Corporation Enema. The melodies and the voice… so Harold, everyone calls him Happy. Happy was the bass player, but Happy is a phenomenal all-round musician – he plays the drums, he plays the bass, he plays the piano, he sings, he plays guitar. I went to see them play at the 9.30 Club in Washington D.C., and when he got up and sang those songs, I’m not kidding it was almost like hearing Stevie Wonder in a small club. It fucking blew my mind. At the time, in the punk rock scene, that was just miles above any of the other musicians in any of the other bands. But those two songs on that record, I swear are two of the most beautiful songs I’ve ever heard in my entire life. So Royal Crescent Mob breaks up, he starts another band called Howlin’ Maggie, where he plays guitar and sings. They had another song called Alcohol, which came out in maybe 1995. Fucking phenomenal, another amazing song. His voice is just so soulful and fucking beautiful. We knew each other back then, and then I didn’t hear from him in a long time, then were connected in the last couple of years. One of his newer songs, which is called A Man Needs An Airplane, just listen to that song and tell me that he’s not… it’s like it could be Gerry Rafferty… there’s just something about his sense of melody that’s advanced. He almost joined the Foo Fighters in 1999 when we were looking for a guitar player. We were asked to play at the disastrous Woodstock in 1999, and we had just finished making our third record, and Chris Shiflett hadn’t joined the band then. I’m, like, Fuck, I’m gonna call Happy. He’s more than able to play any of these songs. But it didn’t really work out.