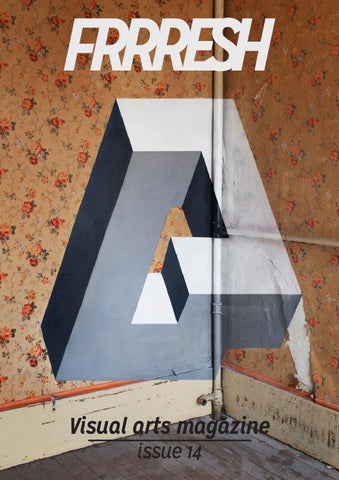 14 (fourteen /fɔərˈtiːn/) is the natural number following 13 and preceding 15. In speech, the numbers 14 and 40 are often confused. When carefully enunciated, they differ in which syllable is stressed: 14 /fɔərˈtiːn/ vs 40 /ˈfɔrti/. That’s what Wikipedia has on 14, so beware not to mix this issue with no.40 as you might end up in the future and miss some of the great artists existing in now. Here are some more fun fucks on 40 - sorry, facts on 14: —The atomic number of silicon. —The approximate atomic weight of nitrogen. —The size of this text in points. —The maximum number of electrons that can fit in an f sublevel. —The minimum age limit to drive a 50cc motorbike in Italy. —The number of pieces the body of Osiris was torn into by his fratricidal brother Set. —Nuestra Familia is a gang that uses “XIV” as their symbol because the 14th letter of the English alphabet is “N”. —A common designation for the thirteenth floor in many buildings for superstitious reasons.

Fanette Guilloud is a young photographer, aged 22. In 2013, she graduated from photography school in Toulouse and won a Special Jury Mention at the end of that year. She develops her style combining photography with creative installation art. Her creations anchor illusions in the real. Her attraction to geometry and minimalism elicits a poetic vision of the world, a contemplation of the passing of time. Using both the brutality of reality and crafted dreams, she plays with perspective and the notion of the impossible by exploring the limits of rational vision. Born in France, she now lives and works between Berlin and Paris. She also created with 7 others young photographers the artist group Prisme Noir. www.fanetteg.com

â&#x20AC;&#x153;Tapping into the rhythms that make reality, that make us human, and that bind us to the larger universe about us, from waves of punk to the throbbing of reach roots; the hunger of longing, gazing

to the sweetness of home, Monica Ramos threads it all together cleverly, organically, making the complex and the vast seem comforting and familiar.â&#x20AC;? text credit: thechromaticwatch.com

Gretchen Ellen Powers Hello there! My name is Gretchen. I like to think of myself as a curious heart and avid pencil user. I’m an artist and illustrator residing among the tall trees of Michigan. I love that through painting and sketching I can share my dreams with those around me! Through my work I enjoy lassoing characters from my imagination and cradling them in all of the everyday good things. There’s always a bee in my bonnet, and I’m merely in the constant pursuit of capturing it. Fun Fact: On paper I make new and unusual friends and we have grand adventures - every time I draw! ...I hope you like my friends too...

Jezabel Nekranea There is a strange creature living in my head that forces me to create compulsively. Sometimes this creature drives me crazy but most of the time we are very good friends. Together, we are making a new world made of felt and love.

Harriet Taylor Seed is an illustrator from Chichester, England, also known as â&#x20AC;&#x2DC;harrydrawspicturesâ&#x20AC;&#x2122;. Her lo-tech stenciling technique combine with a little computer magic to create patterns and illustrations with a hand-crafted feel. When not drawing, she loves the seaside, provincial museums, folk art, royal commemorative ware, tattoos and rummaging through junk shops amongst other things. Some clients include Threadless, Steven Alan NY, Roger la Borde, Wrap magazine, The Telegraph and Crabtree & Evelyn. Harriet is represented by CIA.

â&#x20AC;&#x153;I aim to show you a story in my work. Not a whole story, but a sliver of a story. Something that intrigues and invites a narrative, but one that may be different from someone else view-

ing the same thing. The stories are open ended and up to the interpretation and imagination of the viewer. I hope to bring people back to their youth when anything was possible, before we are told and shown otherwise by the real world.â&#x20AC;? Graham was raised in the woods or Massachusetts and currently lives and works in Austin TX.

Giulio Vesprini Giulio Vesprini was born in 1980 in Civitanova Marche (Italy) where he lives and works. He has attended two ma jor schools: Accademy of Fine Arts in Macerata and the Departement of Architecture in Ascoli Piceno. He has obtained various awards and publications related to his graphic design, wall paint and illustration work. He moves freely from graphic to illustration, from painting to street art, from video and photo to architecture.â&#x20AC;?...My research focused on several fronts including land art and urban culture. I prefer simple lines similar to my graphic and architectural origins. I draw primitive design by graphic signs, illustrations and urban actions. My works are born from minimal culture where the shape represents the main idea. I think that my freehand drawing symbolizes abstract expressionism where I often feel to reach a perfect work...â&#x20AC;? giuliovesprini.it

Photos and text: Courtesy of each author unless stated otherwise 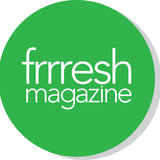 Fourteenth issue of Frrresh, the online visual arts magazine — visit us at www.frrresh.org

Fourteenth issue of Frrresh, the online visual arts magazine — visit us at www.frrresh.org