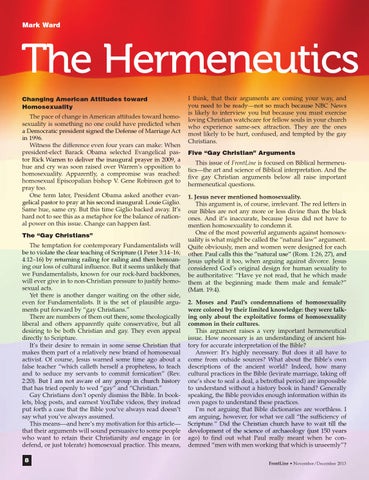 The Hermeneutics Changing American Attitudes toward Homosexuality The pace of change in American attitudes toward homosexuality is something no one could have predicted when a Democratic president signed the Defense of Marriage Act in 1996. Witness the difference even four years can make: When president-elect Barack Obama selected Evangelical pastor Rick Warren to deliver the inaugural prayer in 2009, a hue and cry was soon raised over Warren’s opposition to homosexuality. Apparently, a compromise was reached: homosexual Episcopalian bishop V. Gene Robinson got to pray too. One term later, President Obama asked another evangelical pastor to pray at his second inaugural: Louie Giglio. Same hue, same cry. But this time Giglio backed away. It’s hard not to see this as a metaphor for the balance of national power on this issue. Change can happen fast. The “Gay Christians” The temptation for contemporary Fundamentalists will be to violate the clear teaching of Scripture (1 Peter 3:14–16; 4:12–16) by returning railing for railing and then bemoaning our loss of cultural influence. But it seems unlikely that we Fundamentalists, known for our rock-hard backbones, will ever give in to non-Christian pressure to justify homosexual acts. Yet there is another danger waiting on the other side, even for Fundamentalists. It is the set of plausible arguments put forward by “gay Christians.” There are numbers of them out there, some theologically liberal and others apparently quite conservative, but all desiring to be both Christian and gay. They even appeal directly to Scripture. It’s their desire to remain in some sense Christian that makes them part of a relatively new brand of homosexual activist. Of course, Jesus warned some time ago about a false teacher “which calleth herself a prophetess, to teach and to seduce my servants to commit fornication” (Rev. 2:20). But I am not aware of any group in church history that has tried openly to wed “gay” and “Christian.” Gay Christians don’t openly dismiss the Bible. In booklets, blog posts, and earnest YouTube videos, they instead put forth a case that the Bible you’ve always read doesn’t say what you’ve always assumed. This means—and here’s my motivation for this article— that their arguments will sound persuasive to some people who want to retain their Christianity and engage in (or defend, or just tolerate) homosexual practice. This means, 8

I think, that their arguments are coming your way, and you need to be ready—not so much because NBC News is likely to interview you but because you must exercise loving Christian watchcare for fellow souls in your church who experience same-sex attraction. They are the ones most likely to be hurt, confused, and tempted by the gay Christians. Five “Gay Christian” Arguments This issue of FrontLine is focused on Biblical hermeneutics—the art and science of Biblical interpretation. And the five gay Christian arguments below all raise important hermeneutical questions. 1. Jesus never mentioned homosexuality. This argument is, of course, irrelevant. The red letters in our Bibles are not any more or less divine than the black ones. And it’s inaccurate, because Jesus did not have to mention homosexuality to condemn it. One of the most powerful arguments against homosexuality is what might be called the “natural law” argument. Quite obviously, men and women were designed for each other. Paul calls this the “natural use” (Rom. 1:26, 27), and Jesus upheld it too, when arguing against divorce. Jesus considered God’s original design for human sexuality to be authoritative: “Have ye not read, that he which made them at the beginning made them male and female?” (Matt. 19:4). 2. Moses and Paul’s condemnations of homosexuality were colored by their limited knowledge: they were talking only about the exploitative forms of homosexuality common in their cultures. This argument raises a very important hermeneutical issue. How necessary is an understanding of ancient history for accurate interpretation of the Bible? Answer: It’s highly necessary. But does it all have to come from outside sources? What about the Bible’s own descriptions of the ancient world? Indeed, how many cultural practices in the Bible (levirate marriage, taking off one’s shoe to seal a deal, a betrothal period) are impossible to understand without a history book in hand? Generally speaking, the Bible provides enough information within its own pages to understand these practices. I’m not arguing that Bible dictionaries are worthless. I am arguing, however, for what we call “the sufficiency of Scripture.” Did the Christian church have to wait till the development of the science of archaeology (just 150 years ago) to find out what Paul really meant when he condemned “men with men working that which is unseemly”? FrontLine • November/December 2013 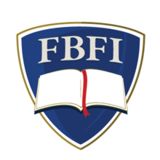