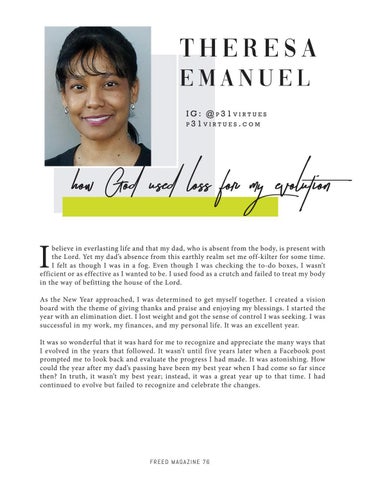 How God Used Loss for my Evolution I

believe in everlasting life and that my dad, who is absent from the body, is present with the Lord. Yet my dad’s absence from this earthly realm set me off-kilter for some time. I felt as though I was in a fog. Even though I was checking the to-do boxes, I wasn’t efficient or as effective as I wanted to be. I used food as a crutch and failed to treat my body in the way of befitting the house of the Lord. As the New Year approached, I was determined to get myself together. I created a vision board with the theme of giving thanks and praise and enjoying my blessings. I started the year with an elimination diet. I lost weight and got the sense of control I was seeking. I was successful in my work, my finances, and my personal life. It was an excellent year. It was so wonderful that it was hard for me to recognize and appreciate the many ways that I evolved in the years that followed. It wasn’t until five years later when a Facebook post prompted me to look back and evaluate the progress I had made. It was astonishing. How could the year after my dad’s passing have been my best year when I had come so far since then? In truth, it wasn’t my best year; instead, it was a great year up to that time. I had continued to evolve but failed to recognize and celebrate the changes.

This FREED issue showcases contributors from all over the world who share redemptive, transparent and powerful testimonies of how God created beauty out of ashes. V. Rose gives insight to her creative genius and encourages other creatives to master their craft. 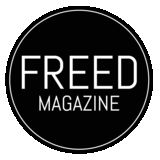