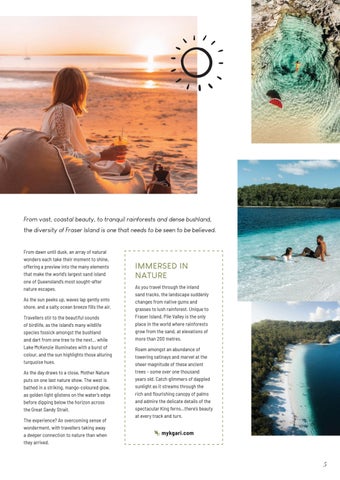 From vast, coastal beauty, to tranquil rainforests and dense bushland, the diversity of Fraser Island is one that needs to be seen to be believed. From dawn until dusk, an array of natural wonders each take their moment to shine, offering a preview into the many elements that make the world’s largest sand island one of Queensland’s most sought-after nature escapes. As the sun peeks up, waves lap gently onto shore, and a salty ocean breeze fills the air. Travellers stir to the beautiful sounds of birdlife, as the island’s many wildlife species fossick amongst the bushland and dart from one tree to the next… while Lake McKenzie illuminates with a burst of colour, and the sun highlights those alluring turquoise hues. As the day draws to a close, Mother Nature puts on one last nature show. The west is bathed in a striking, mango-coloured glow, as golden light glistens on the water’s edge before dipping below the horizon across the Great Sandy Strait. The experience? An overcoming sense of wonderment, with travellers taking away a deeper connection to nature than when they arrived.

IMMERSED IN NATURE As you travel through the inland sand tracks, the landscape suddenly changes from native gums and grasses to lush rainforest. Unique to Fraser Island, Pile Valley is the only place in the world where rainforests grow from the sand, at elevations of more than 200 metres. Roam amongst an abundance of towering satinays and marvel at the sheer magnitude of these ancient trees – some over one thousand years old. Catch glimmers of dappled sunlight as it streams through the rich and flourishing canopy of palms and admire the delicate details of the spectacular King ferns…there’s beauty at every track and turn. 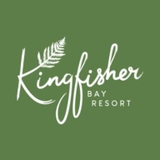