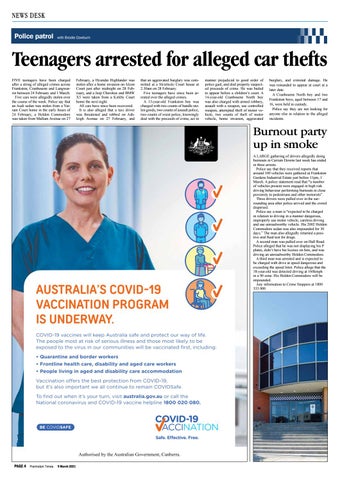 Teenagers arrested for alleged car thefts FIVE teenagers have been charged after a string of alleged crimes across Frankston, Cranbourne and Langwarrin between 24 February and 1 March. Five cars were allegedly stolen over the course of the week. Police say that an Audi sedan was stolen from a Yarram Court home in the early hours of 24 February, a Holden Commodore was taken from Mallum Avenue on 27

February, a Hyundai Highlander was stolen after a home invasion on Alcon Court just after midnight on 28 February, and a Jeep Cherokee and BMW X5 were taken from a Kirkby Court home the next night. All cars have since been recovered. It is also alleged that a taxi driver was threatened and robbed on Ashleigh Avenue on 27 February, and

that an aggravated burglary was committed at a Strzelecki Court house at 2.30am on 28 February. Five teenagers have since been arrested over the alleged crimes. A 15-year-old Frankston boy was charged with two counts of handle stolen goods, two counts of assault police, two counts of resist police, knowingly deal with the proceeds of crime, act in

manner prejudicial to good order of police gaol, and deal property suspected proceeds of crime. He was bailed to appear before a children’s court. A 14-year-old Cranbourne North boy was also charged with armed robbery, assault with a weapon, use controlled weapon, attempted theft of motor vehicle, two counts of theft of motor vehicle, home invasion, aggravated

burglary, and criminal damage. He was remanded to appear at court at a later date. A Cranbourne North boy and two Frankston boys, aged between 17 and 16, were held in custody. Police say they are not looking for anyone else in relation to the alleged incidents.

Burnout party up in smoke A LARGE gathering of drivers allegedly doing burnouts in Carrum Downs last week has ended in three arrests. Police say that they received reports that around 100 vehicles were gathered at Frankston Gardens Industrial Estate just before 11pm, 1 March. A police statement read that “a number of vehicles present were engaged in high risk driving behaviour performing burnouts in close proximity to pedestrians and other motorists”. Three drivers were pulled over in the surrounding area after police arrived and the crowd dispersed. Police say a man is “expected to be charged in relation to driving in a manner dangerous, improperly use motor vehicle, careless driving and use unroadworthy vehicle. His 2002 Holden Commodore sedan was also impounded for 30 days.” The man also allegedly returned a positive oral fluid test for drugs. A second man was pulled over on Hall Road. Police alleged that he was not displaying his P plates, didn’t have his licence on him, and was driving an unroadworthy Holden Commodore. A third man was arrested and is expected to be charged with drive at speed dangerous and exceeding the speed limit. Police allege that the 18-year-old was detected driving at 160kmph in a 90 zone. His Holden Commodore will be impounded. Any information to Crime Stoppers at 1800 333 000