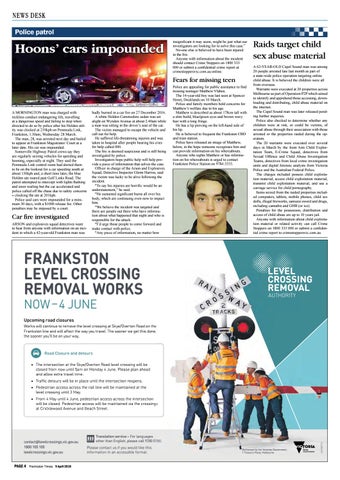 insignificant it may seem, might be just what our investigators are looking for to solve this case.” No-one else is believed to have been injured in the fire. Anyone with information about the incident should contact Crime Stoppers on 1800 333 000 or submit a confidential crime report at crimestoppersvic.com.au online.

badly burned in a car fire on 27 December 2016. A white Holden Commodore sedan was set alight on Wynden Avenue at about 2.40am while a man was sitting in the driver’s seat of the car. The victim managed to escape the vehicle and call out for help. He suffered life-threatening injuries and was taken to hospital after people hearing his cries for help called 000. The fire is deemed suspicious and is still being investigated by police. Investigators hope public help will help provide a piece of information that solves the case. Officer in charge of the Arson and Explosives Squad, Detective Inspector Glenn Harriss, said the victim was lucky to be alive following the incident. “To say his injuries are horrific would be an understatement,” he said. “He sustained significant burns all over his body, which are continuing even now to impact him. “We believe the incident was targeted and there are people out there who have information about what happened that night and who is responsible for the attack. “I’d urge those people to come forward and make contact with police. “Any piece of information, no matter how

Police are appealing for public assistance to find missing teenager Matthew Vlahos. The 14-year-old boy was last seen at Spencer Street, Docklands on 10 March. Police and family members hold concerns for Matthew’s welfare due to his age. Matthew is described as about 178cm tall with a slim build, blue/green eyes and brown wavy hair with a long fringe. He has a lip piercing on the left-hand side of his lip. He is believed to frequent the Frankston CBD and train station. Police have released an image of Matthew, below, in the hope someone recognises him and can provide information on his whereabouts. Anyone who sights Matthew or has information on his whereabouts is urged to contact Frankston Police Station on 9784 5555.

Works will continue to remove the level crossing at Skye/Overton Road on the Frankston line and will affect the way you travel. The sooner we get this done, the sooner you’ll be on your way.

Road Closure and detours • The intersection at the Skye/Overton Road level crossing will be closed from now until 5am on Monday 4 June. Please plan ahead and allow extra travel time. • Traffic detours will be in place until the intersection reopens. • Pedestrian access across the rail line will be maintained at the level crossing until 3 May.

• From 4 May until 4 June, pedestrian access across the intersection will be closed. Pedestrian access will be maintained via the crossings at Cricklewood Avenue and Beach Street.