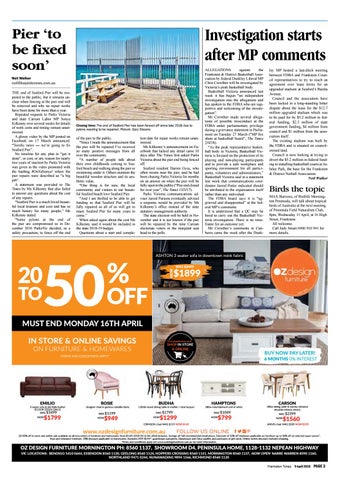 Closing time: The end of Seaford Pier has been fenced off since late 2016 due to pylons needing to be repaired. Picture: Gary Sissons

of the pier to the public. “Since I made the announcement that the pier will be repaired I’ve received so many positive messages from all over the community. “A number of people talk about their own childhoods coming to Seaford beach and walking along the pier or swimming under it. Others mention the beautiful wooden structure and its aesthetic value. “One thing is for sure, the local community and visitors to our beautiful Seaford beach love Seaford Pier. “And I am thrilled to be able to get funding so that Seaford Pier will be fully repaired so all of us will get to enjoy Seaford Pier for many years to come.” When asked again about the cost Ms Kilkenny said it would be included in the state 2018-19 budget. Questions about a start and comple-

tion date for repair works remain unanswered. Ms Kilkenny’s announcement on Facebook that lacked any detail came 10 days after The Times first asked Parks Victoria about the pier end being fenced off. Seaford resident Darren Gyss, who often swims near the pier, said he had been chasing Parks Victoria for months on an answer on when the pier will be fully open to the public (“Pier end closed for over year”, The Times 13/3/17). Parks Victoria communications adviser Jarred Parsons eventually advised a response would be provided by Ms Kilkenny’s office instead of the state statutory management authority. The state election will be held in November and it is not known if the pier will be repaired by the time Carrum electorate voters in the marginal seat head to the polls.

ley MP hosted a last-ditch meeting between FDBA and Frankston Council representatives to try to reach an agreement over lease terms for an upgraded stadium at Seaford’s Bardia Avenue. Council and the association have been locked in a long-standing bitter dispute about the lease for the $12.7 million upgraded stadium which was to be paid for by $5.2 million in federal funding, $2.5 million of state government funding, $4 million from council and $1 million from the association itself. The existing stadium was built by the FDBA and is situated on councilowned land. Council is now looking at trying to divert the $5.2 million in federal funding to installing basketball courts at Jubilee Park, the base for the Frankston &amp; District Netball Association. Neil Walker

Birds the topic MAX Burrows, of Birdlife Mornington Peninsula, will talk about tropical birds of Australia at the next meeting of Peninsula Field Naturalists Club, 8pm, Wednesday 11 April, at 16 High Street, Frankston. All welcome. Call Judy Smart 0400 910 941 for more details.

THE end of Seaford Pier will be reopened to the public, but it remains unclear when fencing at the pier end will be removed and why no repair works have been done for more than a year. Repeated requests to Parks Victoria and state Carrum Labor MP Sonya Kilkenny over several weeks for details of work costs and timing remain unanswered. A glossy video by the MP posted on Facebook on 17 March announced: “Terrific news — we’re going to fix Seaford Pier”. No timeline for any plan to “get it done”, or cost, or any reason for nearly two years of inaction by Parks Victoria was given in the video promoted with the hashtag #OnYaSonya! where the pier repairs were described as “a big job”. A statement was provided to The Times by Ms Kilkenny that also failed to answer any questions about the cost of any repairs. “Seaford Pier is a much loved beautiful local treasure and icon and has so much history for many people,” Ms Kilkenny stated. “Some pylons at the end of the pier are compromised so in December 2016 ParksVic decided, as a safety precaution, to fence off the end

ALLEGATIONS against the Frankston &amp; District Basketball Association by federal Dunkley Liberal MP Chris Crewther will be investigated by Victoria’s peak basketball body. Basketball Victoria announced last week it has begun “an independent investigation into the allegations and has spoken to the FDBA who are supportive and welcoming of the investigation”. Mr Crewther made several allegations of possible misconduct at the FDBA under parliamentary privilege during a grievance statement in Parliament on Tuesday 27 March (“MP fire shots at basketball board”, The Times 2/4/18). “As the peak representative basketball body in Victoria, Basketball Victoria is focused on the protection of its playing and non-playing participants and to provide a safe workplace and sporting environment for all participants, volunteers and administrators,” Basketball Victoria said in a statement last week that communications coordinator Jarrod Potter indicated should be attributed to the organisation itself rather than any individual. The FDBA board says it is “aggrieved and disappointed” at the federal MP’s comments. It is understood that a QC may be hired to carry out the Basketball Victoria investigation. There is no timeframe for an outcome yet. Mr Crewther’s comments in Canberra came the week after the Dunk-

20-50% off in-store and online sale available on all new orders of furniture and homewares from 03-04-2018 till 16-04-2018 inclusive. Savings off full recommended retail prices. Discount of 20% off minimum applicable on furniture up to 50% off on selected super savers*, floor and clearance furniture. 20% discount applicable to homewares. Excludes HOT BUYS*, guardsman warranties, Glasshouse and Circa candles and purchases of gift cards. Online orders discount excludes shipping. Terms and conditions apply see www.ozdesignfurniture.com.au for more information.