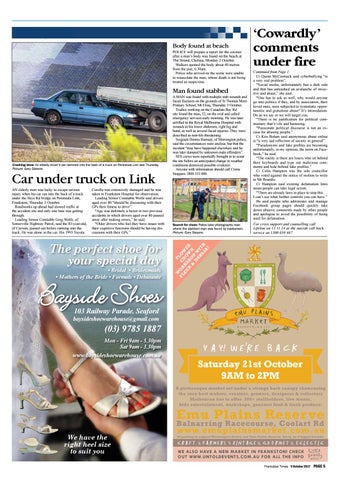 Police patrol Body found at beach POLICE will prepare a report for the coroner after a man’s body was found on the beach at The Strand, Chelsea, Monday 2 October. Walkers spotted the body about 40 metres from the pier, 6.30am. Police who arrived on the scene were unable to resuscitate the man, whose death is not being treated as suspicious.

Car under truck on Link AN elderly man was lucky to escape serious injury when his car ran into the back of a truck under the Skye Rd bridge on Peninsula Link, Frankston, Thursday 5 October. Roadworks up ahead had slowed traffic at the accident site and only one lane was getting through. Leading Senior Constable Greg Wolfe, of Somerville Highway Patrol, said the 83-year-old, of Carrum, passed out before running into the truck. He was alone in the car. His 1993 Toyota

Corolla was extensively damaged and he was taken to Frankston Hospital for observation. Leading Senior Constable Wolfe said drivers aged over 80 “should be discussing with their GPs their fitness to drive”. “Age was definitely a factor in two previous accidents in which drivers aged over 80 passed away after making errors,” he said. “Older drivers who feel they have issues with their cognitive functions should be having discussions with their GPs.”

The perfect shoe for your special day

Search for clues: Police take photographs near where the stabbed man was found by tradesmen. Picture: Gary Sissons

Continued from Page 1 Cr Quinn McCormack said cyberbullying “is a very real problem”. “Social media, unfortunately has a dark side and that has unleashed an avalanche of invective and abuse,” she said. “One has to ask as well, why would anyone go into politics if they, and by association, their loved ones, were subjected to systematic opportunistic and gratuitous abuse? It’s intimidation. Do as we say or we will target you. “There is no justification for political commentary that’s vile and harassing. “Passionate political discourse is not an excuse for abusing people.” Cr Kris Bolam said anonymous abuse online is “a very sad reflection of society in general”. “Pseudonyms and fake profiles are becoming unfortunately, in my opinion, the norm on Facebook,” he said. “The reality is there are losers who sit behind their keyboards and type out malicious comments and hide behind fake profiles.” Cr Colin Hampton was the sole councillor who voted against the notice of motion to write to Mr Brandis. Cr Hampton said existing defamation laws mean people can take legal action. “There are already laws in place to stop this … I can’t see what further controls you can have.” He said people who administer and manage Facebook group pages should quickly take down abusive comments made by other people and apologise to avoid the possibility of being sued for defamation. For crisis support and counselling call Lifeline on 13 11 14 or the suicide call back service on 1300 659 467.

Crushing blow: An elderly driver’s car rammed into the back of a truck on Peninsula Link last Thursday. Picture: Gary Sissons

A MAN was found with multiple stab wounds and facial fractures on the grounds of St Thomas More Primary School, Mt Eliza, Thursday 5 October. Tradies working on the Canadian Bay Rd site found the man, 52, on the oval and called emergency services early morning. He was later airlifted to the Royal Melbourne Hospital with wounds to his lower abdomen, right leg and hand, as well as several facial injuries. They were described as non-life threatening. Sergeant Dennis Ramsay, of Mornington police, said the circumstances were unclear, but that the incident “may have happened elsewhere and he was later dumped by unknown male offenders”. SES crews were reportedly brought in to scour the site before an anticipated change in weather conditions destroyed possible evidence. Anyone with information should call Crime Stoppers 1800 333 000.

We have the right heel size to suit you

WE ALSO HAVE A NEW MARKET IN FRANKSTON! CHECK OUT WWW.UNTOLDEVENTS.COM.AU FOR ALL THE INFO Frankston Times 9 October 2017