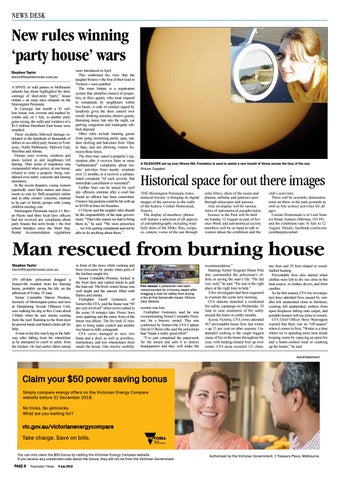 New rules winning ‘party house’ wars Stephen Taylor steve@baysidenews.com.au A SPATE of wild parties in Melbourne suburbs has shone highlighted the shotcomings of short-term “party” house rentals – an issue once rampant on the Mornington Peninsula. In Carnegie last month a $1 million house was overrun and trashed by youths and, on 1 July, in another party gone-wrong, the walls and windows of a $3.5 million Hawthorn East house were smashed. These incidents followed damage estimated in the hundreds of thousands of dollars to so-called party houses in Footscray, North Melbourne, Malvern East, Werribee and Altona. Houses were overrun, windows and doors kicked in and neighbours left fuming. Their sense of impotence was compounded when police, at one house, refused to enter a property being vandalised over safety concerns and leasing anomalies. In the recent disasters, young women reportedly used false names and documents to rent Air BnB properties online and, to allay owners’ concerns, claimed to be part of family groups with young children needing cots. Mornington Peninsula mayor Cr Bryan Payne said shire local laws officers had not received any complaints about party houses this term break – the first school holidays since the Short Stay Rental Accommodation regulations

were introduced in April. This confirmed his view that the tougher bylaws – the first of their kind in Victoria – were justified. The main feature is a registration system that identifies owners of properties, or their agents, who must respond to complaints by neighbours within two hours. A code of conduct signed by landlords gives the shire control over rowdy drinking sessions, abusive guests, thumping music late into the night, car parking congestion and inadequate rubbish disposal. Other rules include banning guests from using swimming pools, spas, outdoor decking and balconies from 10pm to 8am, and not allowing visitors between those times. The shire may cancel a property’s registration after it receives three or more “substantiated” complaints about tenants’ activities from nearby residents over 12 months, or it receives a substantiated complaint “of such severity that immediate cancellation is warranted”. Further fines can be issued for each day offences continue after a court has found an offence has been committed. Owners’ hip pockets could be hit with up to $3100 in fines for breaches. Cr Payne said the tougher rules should be the responsibility of the state government. “That’s the reason we had to bring them in,” he said. “We were powerless … we’d be getting complaints and not be able to do anything about them.”

A TELESCOPE set up near Olivers Hill, Frankston is used to watch a rare transit of Venus across the face of the sun. Picture: Supplied

Historical space for out there images THE Mornington Peninsula Astronomical Society is bringing its digital images of the universe to the walls of the historic Coolart Homestead, Somers. The display of members’ photos will feature a selection of all aspects of astrophotography including wide field shots of the Milky Way, eclipses, comets, views of the sun through

solar filters, shots of the moon and planets, nebulae and galaxies seen through telescopes and auroras. Also on display will be various items of astronomical paraphernalia. Science in the Park will be held on Sunday 12 August as part of Science Week and astronomical society members will be on hand to talk to visitors about the exhibition and the

club’s activities. There will be scientific demonstrations on show in the park grounds as well as free science activities for all ages. Coolart Homestead is in Lord Somers Road, Somers (Melway 193 J9) and the exhibition runs 16 July to 12 August. Details: facebook.com/scienceintheparkcoolart

Man rescued from burning house Stephen Taylor steve@baysidenews.com.au AN off-duty policeman dragged a Somerville resident from his burning home, probably saving his life, on the afternoon of Friday 29 June. Senior Constable Darren Prestney, formerly of Mornington police and now at Dandenong Sexual Offences Unit, was walking his dog in Rex Court about 3.40pm when he saw smoke coming from the roof. Running to the front door he peered inside and heard a faint call for help. A man in his 60s was lying in the hallway after falling from his wheelchair as he attempted to crawl to safety from the kitchen. He had earlier fallen asleep

in front of the stove while cooking and been overcome by smoke when parts of the kitchen caught fire. Senior Constable Prestney kicked in the front door and rushed inside to pull the man out. The brick veneer house was well alight and the interior filled with flames and smoke. Firefighter Geoff Gommers, of Somerville CFA, said the house was “40 per cent involved” when crews rushed to the scene 10 minutes later. Power lines were sparking and the entire front of the house was ablaze. The fire took 45 minutes to bring under control and another two hours to fully extinguish. CFA crews managed to save two boats and a shed, as well as jewellery, mementoes, and two wheelchairs from inside the house. One electric mobility

Fire rescue: A policeman has been recommended for a bravery award after dragging a man for safety from during a fire at this Somerville house. Picture: Gary Sissons

scooter was lost. Firefighter Gommers said he was recommending Senior Constable Prestney for a bravery award. This was confirmed by Somerville CFA Captain David O’Brien who said the policeman had “made a really good effort”. “I’ve just completed the paperwork for the award and sent it to district headquarters and they will make the

recommendation.” Hastings Senior Sergeant Shane Pola also commended the policeman’s efforts in saving the man’s life. “He did very well,” he said. “He was in the right place at the right time to help.” A fire investigator had been requested to examine the scene next morning. CFA stations launched a residential fire safety campaign on Wednesday 20 June to raise awareness of fire safety around the home in colder months. Across Victoria, CFA crews attended 467 preventable house fires last winter – up 15 per cent on other seasons. Unattended cooking is the single biggest cause of fire in the home throughout the year, with heating-related fires up over winter. CFA areas recorded 121 chim-

ney fires and 29 fires related to woodfuelled heating. Preventable fires also started when clothes were left to dry too close to the heat source, in clothes dryers, and from candles. So far this season, CFA fire investigators have attended fires caused by candles left unattended close to furniture, cooking left unattended, embers from open fireplaces falling onto carpet, and portable heaters left too close to towels. CFA Chief Officer Steve Warrington warned that there was no “off-season” when it comes to fires. “Winter is a time where we’re spending more time inside keeping warm by enjoying an open fire and a home-cooked meal or cranking up the heater,” he said. Advertisement