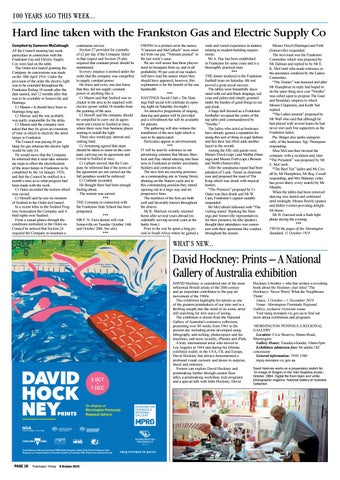 Hard line taken with the Frankston Gas and Electric Supply Co Compiled by Cameron McCullough AT the Council meeting last week particulars in connection with the Frankston Gas and Electric Supply Coy were laid on the table. The Order-in-Council granting the Company its concessions was made on the 18th April 1916. Under the provision of the order the electric light was to be extended throughout the Frankston Riding 18 month after the date named, and 12 months after that was to be available in Somerville and Hastings. Cr Mason – It should have been in Hastings long ago. Cr Murray said the war probably was partly responsible for the delay. Cr Mason said the company now asked that they be given an extension of time in which to electrify the street lamps in Frankston. The Council was paying £6 per lamp for gas whereas the electric light would be only £4. He would move that the Company be informed that it must take immediate steps to effect the electrification of the street lamps in Frankston, to be completed by the 1st January 1920, and that the Council be notified in a month’s time as to what progress had been made with the work. Cr Oates seconded the motion which was carried. Cr Howell said he saw no mention of Seaford in the Order-in-Council. In a recent letter to the Seaford Progress Association the Company said it held rights over Seaford. From a casual glance through the conditions embodied in the Order-inCouncil he noticed that Section 24 required the Company to maintain a

continuous service. Section 27 provided for a penalty of £2 per day if the Company failed in that respect and Section 29 also required that constant power should be maintained. In every instance it seemed under the order that the company was compelled to supply constant power. He knew and every one else knew that they did not supply constant power or anything like it. Cr Mason said that Seaford was included in the area to be supplied with electric power within 18 months from the granting of the area. Cr Howell said the company should be compelled to carry out its agreement and extend to Seaford at once, where there were four business places waiting to install the light. These also would pay interest and sinking fund. Cr Armstrong agreed that steps should be taken to insist on the company carrying out its agreement and extend to Seaford at once. Cr Latham moved, that the Company be informed that if the terms of the agreement are not carried out the full penalties would be enforced. Cr Unthank seconded. He thought there had been enough fooling about. The motion was carried. *** THE Cornopia in connection with the Frankston State School has been postponed. *** MR F. N. Fairs dentist will visit Somerville on Tuesday October 14th and October 28th. See advt. ***

OWING to a printers error the names “Cameron and McCulloch” were omitted from our par, “Veterans praised” in the last week’s issue. We are well aware that these players need no bouquets from us, and in all probability 99 per cent of our readers will have read the names where they should have appeared, however, this explanation is for the benefit of the one hundredth. *** HASTINGS Social Club – The Hastings Hall social will celebrate its opening night on Saturday (to-night.) An attractive programme of singing, dancing and games will be provided and a refreshment bar will be available for patrons. The gathering will also witness the installation of the new light which is sure to be appreciated. Particulars appear in advertisement. *** IT will be seen by reference to our advertising columns that Messrs Sherlock and Hay intend entering into business in Frankston as timber merchants, builders and contractors etc. The new firm are erecting premises on a commanding site in Young Street, abutting on the Station yards and in this commanding position they intend opening out in a large way and on progressive lines. The members of the firm are both well and favorably known throughout the district. Mr R. Sherlock recently returned home after several years abroad (incidentally serving several years at the battle front.) Prior to the war he spent a long period in South Africa where he gained a

wide and varied experience in matters relating to modern building requirements. Mr A. Hay has been established in Frankston for some years and is a thoroughly practical man. *** THE dinner tendered to the Frankston football team on Saturday 4th inst. proved a great social success. The tables were beautifully decorated with red and black drapings, red ixias and palms and simply groaned under the burden of good things to eat and drink. A huge doll dressed as a Frankston footballer occupied the centre of the top table until commandeered by “Smitho.” The ladies who acted as hostesses have already gained a reputation for doing this sort of thing in regal fashion and this their last effort adds another laurel to the wreath. Among the fifty odd guests were Messrs Floyd (capt.) and Moffat (Hastings) and Messrs Firth (capt.) Benson and Webb (Somerville). After the sumptuous repast had been partaken of Lieut. Turner as chairman rose and proposed the toast of The King which was drunk with musical honors. “The Premiers” proposed by Cr Oates was then drunk and Mr W. Cain, Frankston’s captain suitably responded. Mr McCulloch followed with “The visiting teams” thanking the Hastings and Somerville representatives for their presence, he (the speaker) thought their attendance was consistent with their sportsman like conduct throughout the season.

Messrs Floyd (Hastings) and Firth (Somerville) responded. The next toast was the Frankston Committee which was proposed by Mr Dalman and replied to by Mr E. K. McComb who made reference to the assistance rendered by the Ladies Committee. “The Trainer” was honored and after Mr Humphries in reply had hoped to do the same thing next year “Smitho” was called upon to propose The Goal and Boundary umpires to which Messrs Clipperton, and Keith Tait replied. “The Ladies present” proposed by Mr Wall who said that although he had played with several teams he had never met such fine supporters as the Frankston ladies. Pte. Bolger also spoke eulogistically of the hostesses. Sgt. Thompson responding. Miss McLean then favored the company with a recitation and, later “The President” was proposed by Mr E. McComb. “The Beef Tea” ladies and Mr Coxall by Mr Humphries, Mr Reg. Coxall responding, and Mrs Maloney (who has given sherry every match) by Mr Murphy. When the tables had been removed dancing was started and continued until midnight. Messrs Brierly (piano) and Buller (violin) providing delightful music. Mr H. Garrood took a flash light photo during the evening. *** FROM the pages of the Mornington Standard, 11 October 1919

David Hockney: Prints – A National Gallery of Australia exhibition DAVID Hockney is considered one of the most influential British artists of the 20th century and an important contributor to the pop art movement of the 1960s. This exhibition highlights his talents as one of the greatest printmakers of our time and is a thrilling insight into the mind of an iconic artist still searching for new ways of seeing. The exhibition is drawn from the National Gallery of Australia’s extensive collection, presenting over 80 works from 1961 to the present day including prints developed using lithography and etching, photocopiers and fax machines, and more recently, iPhones and iPads. A truly international artist who moved to Los Angeles in 1964 and during his lifetime exhibited widely in the USA, UK and Europe, David Hockney has always demonstrated a profound visual curiosity and desire to surprise, shock and entertain. Visitors can explore David Hockney and printmaking further through curator floor talks, a printmaking workshop, kids programs and a special talk with John Hockney, David